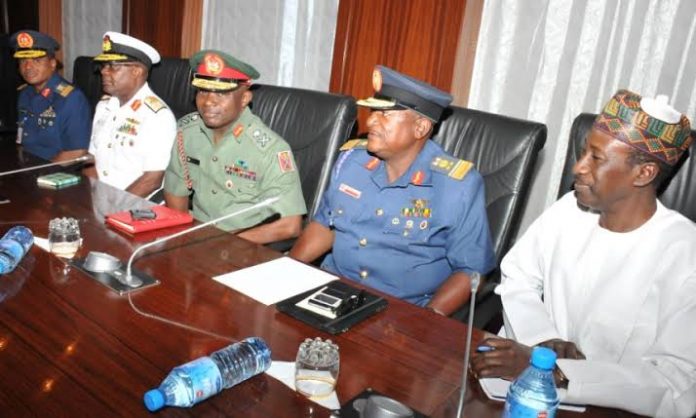 Foremost security analyst and renowned author, Mr. Terence Kwuanum, has advised against acts or utterances capable of distracting the attention of  President Muhammadu Buhari and Nigeria’s security chiefs from focusing on winning the ongoing war against banditry and terrorism in Nigeria.

Kuanum, in an exclusive interview with our correspondent, said the advice is coming on the heels of attempts by some self serving individuals to divert the attention of the President from the success of the ongoing war against banditry and terrorism by introducing pettiness to  serious issues of security.

The security expert said what the President and the security chiefs need now is support and cooperation from all citizens, not politically induced cynicism stressing that since the fight against terrorism and banditry is succeeding going by what the military has been able to achieve in the last three months, the military high command cannot afford to allow anything that will take its eyes off the ball.

He said every second is crucial at this critical time that the war is about to be concluded and the insurgents and bandits have been overwhelmed and boxed to a corner.

“There’s the need to allow for full concentration otherwise the criminals who are praying for something to distract the sevice chiefs may want to take advantage and strike once they notice the slightest opportunity.

“You will notice that immediately the Chief of Army Staff left the theatre of operations to brief Abuja on the successes being recorded in the Northeast, that was when the terrorists struck at Gubio.

“From this, it is obvious that the insurgents are looking for the slightest opportunity to unleash mayhem and may make an attempt once it is clear that the attention of the military chiefs has shifted to something else,” he said.

Kwuanum advised the members of the public who are not abreast with security issues to desist from making comments that are capable of distracting  the attention of the President and the service chiefs.

He said, “Mr. President did not just appoint these service chiefs from nowhere but as a general who had served his country creditably well even during war, his choice of who will work with him on security matters was done after thorough screening and background checks informed by high standards and capabilities.

“Each of these sevice chiefs came with high recommendation and the President has observed that the country has never had it so good since the insurgency started in the Northeast hence has reinforced his conviction that he made the right choice by appointing them, so the least we could do to assist the President is allow the service chiefs concentrate on their jobs.”

Kwuanum said the various operations launched by the military in various parts of the country have all been fruitful without exception saying this suggests that the service chiefs know what they’re doing.

He said when Buratai was appointed Chief of Army Staff in 2015, he launched the first military operation, codenamed  Operation Lafiya Dole in July, 2015 while others like Operation Crocodile Smiles which was aimed at beefing up  internal security in riverine communities followed.

Kwuanum said the army chief went ahead to launch Operation Harbin Kunama to cover the Northwest while the Northcentral and parts of Northwest got Exercise Ayam Akpatuma and the Southeast, Operation Python Dance to rid the region of crimes like kidnapping and banditry.

He said others like Operation Last Hold, which is taking care of other aspects of security operations in the Northeast has been tremendously profound in dealing with insurgency.

Kuanum said all the operations have been highly successful as they achieved their aims as several high-profile terrorists’ and bandits’ leaders have been neutralised while several criminals have also surrendered.

He said criminal activities in many parts of the country stopped because the criminals surrendered to the superior fire power of and intelligence of troops.

The security expert said the military, through these operations were also able to wipe out key Boko Haram and ISWAP commanders, destroy their logistics bases and cut off their supply routes in the Northeast while in the Northcentral region, criminals who have been destroying farmlands or rustling cows and causing communal conflicts have been arrested while several assorted fire arms used by them were also recovered.

Kwuanum added that it is an indication of the success of military operations that cattle rustling have been busted with the several recovery of cows  which have been duly returned to their owners.

“There are many more that the military have been able to achieve but this is the few I remember but I can assure you that what I’ve mentioned are not even one third of the successes recorded.

“Is it the recovery of local governments lost to terrorists during the past administration or the return of internally displaced persons back to their communities? So let us allow these people do their jobs and we will all be happier for it,” he stated.

Kwuanum however called for the review of Operation Last Hold in order to consolidate on the gains so far achieved and to enable the military round up insurgency operations in good time.

He called on the political leadeship to support the efforts of the military by creating an enabling environment for peace to thrive so that economic activities would resume fully to engage the youths and take their minds off criminal activities.

The security expert added that for the process of bringing banditry and terrorism to an all time low, the Nigeria Police  and the Department of State Security, DSS,  should take over the administration of criminal justice while the civil populace should be up and doing in reporting suspicious activities so as to ensure lasting peace and security in the country.