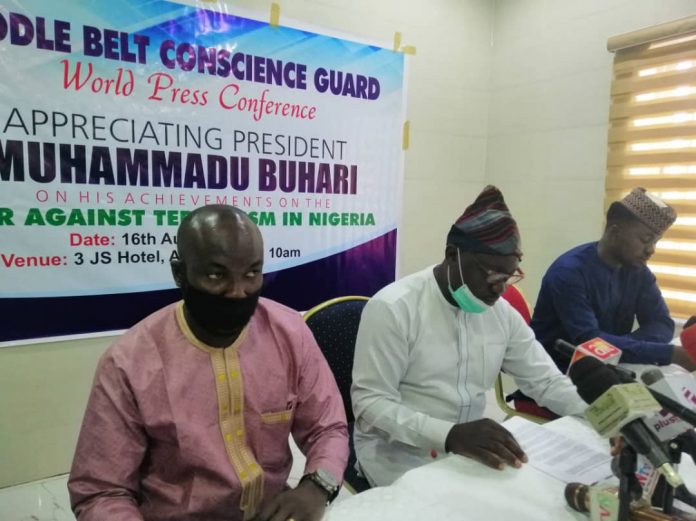 President Muhammadu Buhari has received massive commendation for propelling the military into stamping out Boko Haram terrorists across the northeast.

The Middle Belt Conscience Guard (MBCG), at a press conference on Sunday, in Abuja, said the president deserves hearty and heavenly encomiums for the rewarding impacts of the anti-insurgency campaigns.

According to MBCG, the president has not only flushed out insurgency in five states in the northeast but also halted the evil virus from spreading into the Federal Capital Territory, Benue, Kogi and up the south-west

Speaking on behalf of the group, Publicity Secretary, Patriot Dan Okwa said the entire narration has changed for good since President Buhari assumed office in 2015.

He recalled the era of multiple bombings across the region which escalated to other parts of the country, particularly the FCT.

“But today, the reality of Boko Haram and insurgencies in Nigeria is positively different. The Buhari Presidency with a professionalized, retrained and reoriented Nigerian Military have rapidly changed Nigeria’s negative narratives on combating Boko Haram insurgency and other insurgencies throughout the country,” Patriot Dan Okwa admitted.

“Nigerians now appreciate the reigning peace and security in Bauchi state. The state was Boko Haram’s second point of concentration, after Borno and where insurgents registered strong presence or deposited its arsenals, by constantly bombing security stations, motor parks, schools, banks and worship places. This ugly scenario has been arrested under the administration of President Buhari.

” Since the Buhari Presidency, no bomb has exploded anywhere in Abuja or its environs, and most Northern states have also not experienced bomb explosions in the last five years of this administration. The insecurity situation which seemed intractable has been curtailed by President Buhari.

“These are rare feats on anti-terrorism combats anywhere in the world. We know unmistakably that all over the world, it is extremely difficult for any President to decisively battle insecurity as much as President Buhari has done in a short while. This has come at a great sacrifice to him and his family; but as an unfaltering leader of our country, he is trudging on stronger and stronger until the final victory is anchored for Nigeria.”

With Borno State still experiencing pockets of attacks, the MBCG, however, urged the state government and other relevant stakeholders to support the president clear the remnants of terrorists.

“We wish to solicit the support of Borno State and all her stakeholders to Mr. President to enable him clear Borno of all terrorists as done in other states of the region. Let us emphasize that this plea to Borno people has become necessary and expedient because of their apathy to the counter-insurgency operations and veiled encouragement of insurgents. If Mr.  President has cleared terrorists in Bauchi;  he has done it in Gombe, Yobe, Adamawa, Kano, Kaduna, Plateau and Taraba among others, Borno state is also not an impossible mission, only if the people of the stateside Mr. President.

“Yes, and truly, Mr. President has done it and still very prepared to finish the remaining part of the work on the total liberation of Nigeria from insecurities of whatever colouration.”