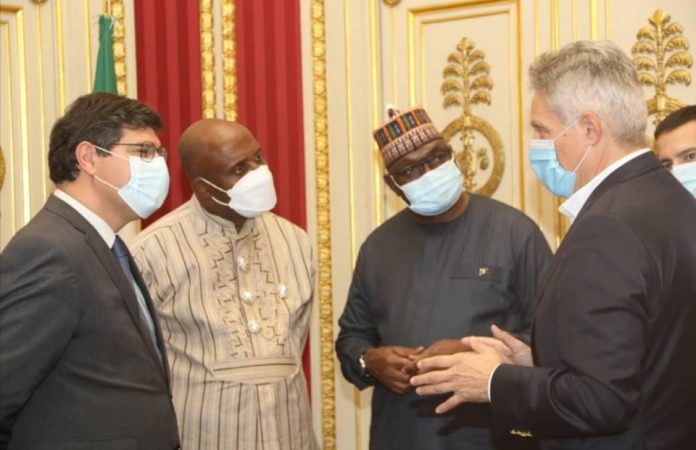 Minister of Transportation, Chibuike Rotimi Amaechi has met with the financing advisory for the construction of Kano-Maradi rail line, seeking a speed-up of the process to ensure construction begins as soon as possible.

In the meeting held at the Nigerian Embassy, Berlin with representatives of KfW-IPEX bank of Germany who are serving as an advisory in partnership with African Finance Corporation for the Kano-Maradi rail project, Amaechi stated that the ECAs (Export Credit Agencies) are free to come to Nigeria and become part of the process on ground to ensure that everything follows their recommenced practices and avert hiccups in the course of the project. This was contained in a statement Thursday signed by the Director Press and Public Relations, Ministry of Transportation, Eric Ojiekwe.

Following their concerns on resettlement of villages that may be impacted by the construction, Amaechi assured that Nigeria has laws in place for that and that the Ministry of Transportation ensured that the right of way was distant from the villages except in Kano where it is difficult to totally avoid the town.

“For us in the Ministry of Transportation, in choosing the right of way, we avoided communities. If we don’t do that, we’ll clear the entire Kano. Like in Lagos, we avoided communities and used the old line, because if we had to choose a different route we would pay billions. In fact, to even work from the old line, we paid 7 billion naira in compensations, not because the people had the right to the land, but because after 12 years and nothing is done it becomes their land and you just can’t chase them out. We still paid compensation, because the rail line was moribund. To eject them we still had to treat them as though they were the original owners of the land. We didn’t wait for Europe. That’s our law.

“In Kano-Maradi, we also took into consideration the people, we choose the right of way distant from the communities, which makes it even more expensive, because government will have to do access roads from the rail line into the communities. We did that because of environmental issues, but the Europeans want us to assume that there are people living along the route. There are none, apart from Kano.

“I don’t know what the law is in Europe in terms of your ESIA. We’ve taken the first step by giving notice, we have assessed the land. What we have not done is payment, because the payment is tied to the contract. On our part, we are ready. What I want to know is the next step to paying compensation, to know that the project is going on and that we can create employment.

The Managing Director/Global Head, Aviation Mobility and Transport, KfW-IPEX Bank, Dr Carsten Wiebers expressed belief that the Nigerian government will be able to manage the risk with pay back of the loan. He advised that the process of putting in place the consulting firms for the project should be sped-up to facilitate financing, while documentation of the process should be properly done.

“Given the fast timeline of 15months, I would recommend speeding up the process of putting in place the consulting companies and other terms of references are met to facilitate the financing. Of course the first level of requirement is your national regulation and law. You take care of that.

“What we are trying to do is create a bridge between your interests and the demands of the Export Credit Agencies, to guarantee we get an affordable loan for you. There has to be evidence of the working group in the areas where the rail would be (actual site) all the way to Kano to convince the decision makers of the ECAs.

“Personally I’m comfortable with your timeline. You dictate the speed of the construction with Mota-Engil. There needs to be an international representative on the site to avoid hiccups with the ECAs. The problem I think is documentation and communication. The process needs to be properly documented and certified,” Wiebers said.

The Director, Mobility and Transport, KfW-IPEX Bank, Sylvia Sedlacek, assured that a consortium of consultants are already working on the ESIA and would come up with the report soon, while a working group has been formed and is in talks with the Nigerian Ministries of Environment, Transportation and Housing on the Environment and social study of the are.

On his part, Nigerian Ambassador to Germany, Yusuf Tuggar explained that the Ministry of Environment in Nigeria started as the Environmental protection agency which also came about through conventions and series of stakeholders meetings, locally and internationally. So they are naturally inclined to abide by the regulations.

Earlier, the Minister of Transportation, Chibuike Rotimi Amaechi with a team from the Ministry and officials of the Nigerian Embassy in Portugal toured a major rail project site by Mota-Engil to ascertain their capacity to construct the Kano-Maradi rail within the stated timeframe of 15 months.

The project, ‘Corredor International Sul – Ligação Freixo/Alandroal’ also known as Evora line is a 78km rail project to unite the Port of Sines all the way to Spain. The 20km extension being handled by Mota-Engil has 10 bridges, one of which is a 600m Bridge – the longest in the line, 11 overhead bridges (over passage), 5 underpasses (1 for cars, finished within 2 days of nonstop work, and a total of 800 workers on the project.

The site Engineer, Luis Mota explained that the project of that magnitude is one of the fastest within 19 months.
Amaechi however demanded that the Kano-Maradi project be faster as it is an EPC, “by now you should have finished your backend engineering and design,” he said. Amaechi further called for a meeting in Abuja in the first week of January to identify all the challenges and ensure that the contractor follows the plan.

At the Nigerian Embassy in Lisbon, the Ambassador, Alex Kefas expressed joy that the country is moving forward. According to him, “I have never seen massive railway projects in Nigeria until he (Amaechi) became Minister. We are grateful he is doing very well. We just finished a meeting with the secretary of internalisation which will help in boosting our bilateral relations. At the bilateral meeting, they assured us of their support in achieving this project (Kano-Maradi).

Both the Minister and the Ambassador were at the Portuguese foreign ministry for bilateral talks and both nations agreed to be of help to one another. The Portugese Secretary of State for Internalisation affairs, Mr. Eurico Brilhante Dias assured the Minister of Portugal’s support and cooperation to ensure that the project by Mota-Engil is completed without hitches.