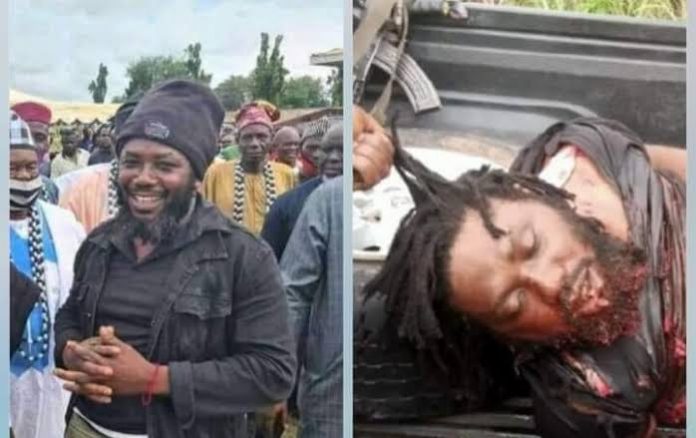 The Commander, 4 Special Forces Command, Doma, Nasarawa state, Monday Ali, told journalists on Tuesday that Gana was killed at a roadblock mounted by the army along Gbese-Gboko-Makurdi road following exchange of gunfire.

The Benue State Government had in 2015 granted amnesty to over 500 persons including Gana, who were terrorising parts of Benue and Taraba states, but most of them relapsed into criminality.

Gana was later in 2017 declared wanted by the police while the Benue State Government placed an N10 million bounty on him.

In a press statement signed by its  President, Comrade Boniface Terkula, on Thursday, the Benue group welcomed the killing of Gana, saying it marks the “end of the reign of terror perpetrated by the now-deceased militia leader”.

“We commend the Nigerian troops of Operation Ayem Akpatuma and the military for neutralizing the notorious killer that Terwase Akwaza “Gana” was even as we urge them to note that their job is not yet done on account of the terrorist’s many lieutenants that have taken flight and possibly hiding among the civilian population,” Terkula wrote.

“Gana with his fighters have been responsible for killing many indigenes and other Nigerians during his reign of terror and extortion with him and his gang known to have been responsible for many of the killings around the Benue/Taraba axis. Many of these killings were staged to have ethnic colouration such that even more lives are lost in their aftermath as communities and ethnic nationalities carry out counter-attacks against the wrong enemies because they are unaware that Gana’s evil was at work.

” He was responsible for cattle rustling in the areas where he operated and this had in several instances led to numerous crisis between the Tiv and the Jukun, and on several occasions bloody and catastrophic strife between Tiv farmers and Fulani pastoralists who attack communities where their cattle have been rustled without realizing that Gana’s militants were responsible.

” We note that Gana had prior to his death reportedly surrendered, was received by prominent leaders in Katsina-Ala and was on the way to Makurdi, the state capital, before he met his end on the way.

” However, we are aware that Gana staged a similar embrace of amnesty at the Benue State Government House in 2015 when he and his fighters turned in as many as 200 AK-47 rifles and other guns. But Benue people to get the shocker that Gana’s surrender then was a cover to move close up and exterminate those responsible for security in the state with the killing of the Senior Special Assistant to the state Governor on Security,  Denen Igbane, in 2016 being the start of Gana’s return to dealing terror.

” We are not ruling out the possibility that Gana’s last embrace of amnesty was a repeat of his old trick, which would have allowed him moved the supposedly surrendered weapons into the capital and do maximum damage to a state painfully reeling from strings of violence including the ones for which he was responsible.

” The conflicting accounts of how Gana met his end, however, calls for investigation so that all concerned can get closure. While the Commander, 4 Special Forces Command, Doma, Nasarawa State, Major General Moundhey Ali, said Gana was neutralized when he engaged troops at a roadblock other accounts said he was arrested on the way to Makurdi in the company of some those who earlier received him in Katsina-Ala.

” We believe an investigation will get to the root of what truly transpired. Where the investigation establishes that there was an extra-judicial execution, anyone found culpable in the act should be dealt with in accordance with the law”.

The Benue Good Governance Crusade, however, urged the military and the law enforcement agencies not to dwell on this controversy, allowing the militants under Gana’s command to flee and regroup to do more harm as was the case after the demise of Mohammed Yusuf, Boko Haram founder.

” We appeal that the last of Gana’s followers be hunted down and brought to book now unless of course they embrace the amnesty programme and submit themselves for rehabilitation and reintegration into society,” the statement added.

” We further appeal to political, religious and traditional leaders in Benue state not to comment on Gana’s demise in a manner that idolizes him and become rallying cries for his militants since the state will pay dearly for such indiscretion”.