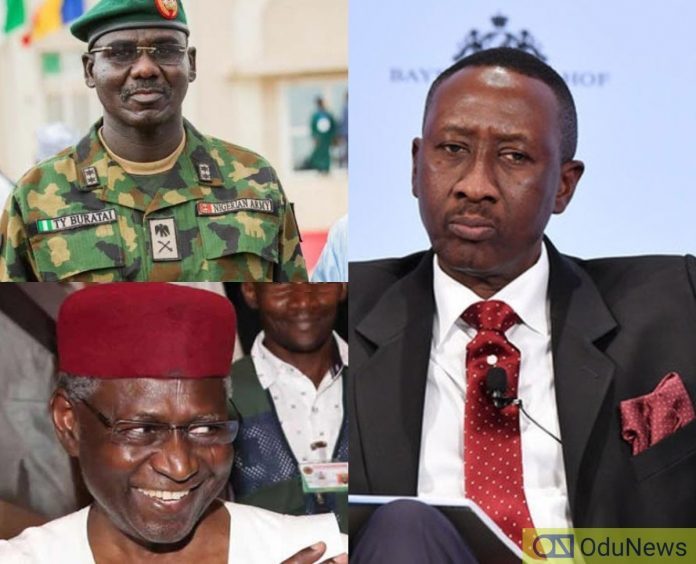 Following a much-celebrated report, online newspaper, Premium Times, has been warned against dragging Chief of Army Staff (COAS), Lieutenant General Tukur Buratai, into the middle of an alleged feud between National Security Adviser (NSA) Gen. Babagana Monguno (rtd) and the Chief of Staff (CoS) to the President, Alhaji Abba Kyari.

After initially claiming that Monguno accused Abba Kyari of undue interference on matters bordering on national security, the online portal went further to allege that the COAS took sides with the latter.

Tsav said this is only a well-crafted mischief with highly inciting contents, provocative to the sensibilities of Nigerians, and bears elements of compromising national security.

According to the ex-CP, “issues of redeployment and postings of Army personnel are routine administrative procedures exclusively at the discretion of the Army leadership guided by the service needs of personnel in specific areas”.

Unlike claimed, Tsav added that the Army Chief does not take directives from the office of NSA but the President.

Even though the COAS may not be aware of this “artificial war of attrition”, Tsav cautioned Premium Times and other mischief makers to allow him fully concentrate on his giant strides in the counter-insurgency campaign.

“Please, do not drag the Chief of Army Staff into your campaign of attrition:”

An open letter.
I send you affectionate greetings together with members of your editorial team. May God continue to bless and guide all of you on the path of truth and accuracy as watchdogs and the true conscience of society.

May you kindly refer to your online publication dated February 21, 2020; which had the screaming caption: “Exclusive: Abba Kyari-Monguno War: Army Chief Buratai Moves Against NSA.

In the said publication, your medium perniciously dragged the office, duties and personality of the COAS and leader of counter-insurgency operations in Nigeria, Lt.Gen. TY Buratai into the imaginary feud, between the office of the National Security Adviser (NSA) Gen. Babagana Monguno (rtd) and the Chief of Staff (CoS) to the President, Alhaji Abba Kyari, which is widely celebrated on social media platforms.

I was fascinated by its mendacity and carefully crafted mischief. Its contents are also highly inciting, provocative to the sensibilities of Nigerians, and bears elements of compromising national security.

I elect upon myself to dispel or denounce explicitly the baseless, disjointed, malicious and provocative gerrymandering as reflected by the medium targeted at the top echelon of Nigeria’s security leadership solely based on conjecture. But it is more significant to draw your attention to its resistant link to the COAS in a presumed altercation, which he is not aware and has no nexus to it whatsoever.

In the desperation to smoothen the campaigns of this agenda, the publication delved into puerile arguments and recanted itself at several points. Let me clear your doubts that the issues of redeployment and postings of Army personnel are routine administrative procedures exclusively at the discretion of the Army leadership guided by the service needs of personnel in specific areas.

And your report cannot admit that “all the agencies attached to the NSA “have the powers to make changes to their respective personnel serving there,” and simultaneously, scrub extraneous reasons to deny the Nigerian Army such lawful institutional powers. This is after it is also submitted to the cumbersome process of selecting and posting Army personnel to the office of the NSA as deemed fit by the Army leadership.

For the sake of records, the Army Chief does not take directives from the office of NSA, as the report carelessly insinuated. The COAS strictly takes directives from the President and Commander -in-Chief of the Nigerian Armed Forces who wields the final authority on all national security Heads.

I have absolute trust in Lt. Gen TY Buratai as a professional soldier, loyal and patriotic leader to his country. And by his antecedents known to me over the years, the Gen. Buratai I know; and Nigerians can vouch for his integrity and sterling leadership qualities, he is very busy in the trenches, coordinating troops in the war against insurgency, angling and itching for results.

Let the campaigners of the fabricated and incipient animosity in the ranks of top government appointees spare him of the orchestrated campaigns of widening the imaginary lines of attrition between the NSA and CoS to the President.

The COAS is neither involved in this artificial war of attrition nor has any knowledge of it. The COAS is more concerned and devotes attention to deliver excellent results on the duties assigned to him and his office by Mr. President. He will not compromise his official responsibilities for any personal interest and should not be distracted now.

Nigerians who are celebrating the imaginary animosity and perhaps, fervently praying for a crack in Mr. President’s national security leadership, should redirect their idle selves elsewhere, but certainly not in the direction of Lt. Gen. Buratai. He is a soldier with impeccable credentials and a leader per excellence.
Thank you.