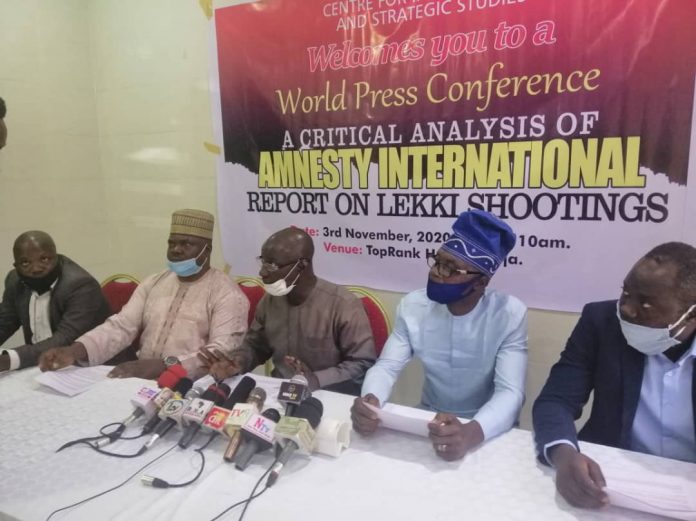 A special report has revealed that Amnesty International succumbed to social media exaggeration and fake news in its report on the Lekki toll gate shootings in Lagos State.

The Centre for International and Strategic Studies (CISS) said it arrived at this conclusion after a systematic analysis of the events that led to the escalation of violence in the aftermath of the deployment of troops.

In its report signed by Special Rapporteur, Prof Peter Maidoki, the CISS said Amnesty International was hasty in its conclusion and failed to do a thorough job.

It also rubbished the claim as regards the time soldiers arrived at the toll gate, noting that AI relied on the bulk of the misinformation passed around in the social media space.

Contrary to Amnesty’s report, the centre noted that soldiers at the venue of the protest fired shots in the air to disperse the protesters and not directly at the crowd.

The CISS, though, accepted in its report that protesters may have suffered injuries during the pandemonium that ensued.

From videos scrutinized as well as information gathered from various stakeholders, the centre said the report of soldiers loading dead bodies into their truck is false.

While acknowledging that there may be a desperate campaign to discredit the military, the CISS said Amnesty’s deep-rooted contempt for the Nigerian Army is well-known.

The centre, however, urged relevant authorities in the country to begin the process of profiling those individuals and groups whose actions contributed to the escalation of the conflict.

It also advised the Federal Government to continually engage the citizens on the danger of a single narrative on issues of national concern.

The Centre for International and Strategic Studies undertook a systematic analysis of the events that led to the escalation of violence in the aftermath of the deployment of soldiers to the Lekki Tollgate where EndSARS protesters were gathered.

The objective of the systematic analysis was to put issues in proper perspective for the generality of Nigerians who are fed continuously with various and varying narratives by some groups and associations.

This interim report consequently x-rayed the various factors that led to the skirmish in a most objective manner devoid of any form of bias in its conclusion. This is also on the heels that the Centre for International and Strategic Studies has built a strong reputation over the years in its interventions and contributions to the national discourse in Nigeria.

The critical issues in the incident in Lagos have been centred on the involvement of the Nigerian Army in the Lekki EndSARS protest where it was alleged that soldiers fired gunshots in a crowd of peaceful protesters armed only with the national flag. It was also alleged that over 78 persons were killed as a result of gunshots injuries sustained.

Human Rights organization, Amnesty International in its report on the incident stated that footage collated showed how “at approximately 6.45 pm, the Nigerian military opened fire on the #EndSARS protesters who were peacefully calling for an end to police brutality”.

Amnesty International also alleged that shortly before the shootings, CCTV cameras at the Lekki toll gate, where #EndSARS protesters had been camped for two weeks, were removed by government officials and the electricity was cut – an apparent attempt to hide evidence.

It also stated that some of those killed and injured at both grounds were allegedly taken away by the military.

The Centre for International and Strategic Studies given the gravity of the allegations levelled against the Nigerian Army, and the need to ensure that the extent of the Army’s involvement in the conflict is determined engaged some critical stakeholders in Lagos state, as well as other individuals and groups that witnessed the incident on the spot.

From pour interactions and analysis, there seem to be a non-correlation with the figures presented by Amnesty International and that of other stakeholders.   It is our considered view that Amnesty International was hasty in its conclusion with regards to the number of deaths recorded at the Lekki Tollgate incident.

The claim made with regards the time soldiers arrived at the Lekki Tollgate were also inaccurate as it was realized that Amnesty International relied on the bulk of the misinformation passed around in the social media space in arriving at its conclusion.

It must be stated that there is a possibility that Amnesty International was caught up with the exaggerations in the social media space and didn’t do due diligence with information at their disposal before going to press in its narration of the events that transpired at the Lekki Tollgate.

Amnesty International from our findings indeed contributed immensely to the bulk of the misinformation that made the round with regards to the actual number of casualties recorded at the Lekki Tollgate.

There was also no record of soldiers loading dead bodies into their truck as alleged. All the videos scrutinized as well as information gathered from various stakeholders, it was realized that the allegation is false and meant to disparage the efforts of the Nigerian Army.

Our findings also indicated that the soldiers at the Lekki Tollgate shot in the air in an attempt to disperse the crowd and that led to pandemonium amongst the protesters resulting in injuries of various magnitudes.

This fact was indeed corroborated by multiple sources, including some of those present at the venue of the shootings. It was established that the soldiers didn’t fire shots into the crowd as alleged and if that was the case, the whole place would have been littered with dead bodies.

The position of the Centre for International and Strategic Studies after due consultation and interrogation of issues takes the position that there is a subtle campaign to discredit the Nigerian Army in its involvement in internal security operations.

This position is hinged on the fact that lots of misinformation made the rounds accusing the Nigerian Army of crimes against humanity, whereas it was the intervention of the Nigerian Army that indeed saved the day.

In the concluding analysis, it suffices to state that Amnesty International through its actions with regards to the EndSARS protest indeed harbours a deep-rooted contempt for the Nigerian Army.  This was evident in the way and the manner it castigated the efforts of the Nigerian Army in the restoration of law and order in the country.

Amnesty International and other organizations disregarded the negative effect of their actions in the polity. Consequently, they made allegations against the Nigerian Army that from all indications cannot be substantiated.

It consequently might not be out of place if indeed Amnesty International has an ulterior motive aimed at discrediting the Nigerian Army hence it’s narrative on the Lekki Tollgate incident, which from all available facts lacked objectivity, but laced with half-truths and illogical conclusions.

The Centre for International and Strategic Studies as a result of the findings in this interim report wishes to make the following recommendations:

That the Nigerian Army authorities should begin the process of disabusing the minds of Nigerians that might have believed that shots were fired into the crowd of peaceful protesters.

That the relevant authorities in Nigeria should begin the process of profiling those individuals and groups whose actions contributed to the escalation of the conflict to bring them to face the full wrath of the law for spreading fake news and heating the polity unnecessarily.

That the government must continually engage the citizens on the danger of a single narrative on issues of national concern.

That the leadership of the Nigerian Army should continually train its personnel on internal security operations with regards to the rules of engagement.