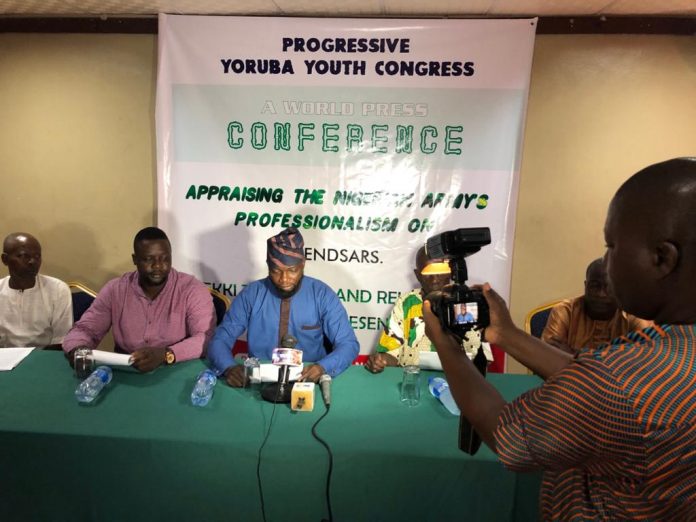 The Progressive Yoruba Youths Council (PYYC) says the CCTV footage brought before the Lagos State Judicial Panel of Inquiry has exposed merchants of fake news against the Nigerian Army.

According to the group, the misconception that the clip from the Lekki toll gate was destroyed has been proven otherwise.

Speaking at a press conference on Sunday in Lagos, President of the group, Kola Salawu said the video showed that no massacre took place as being portrayed.

The PYYC added that the footage also rubbished DJ Switch’s claims while vindicating the Army.

The group, however, appealed to the troops to get past the distraction of those that have been desperate to scapegoat it for the failure of their protests.

Gentlemen of the press, the entire world has now seen the much-anticipated CCTV footage from the night of Tuesday, October 20, 2020, as part of disclosures being made before the Lagos State Judicial Panel of Inquiry. Without prejudice to what the Panel will come up with, the emergence of the video brought closure on certain fronts and it will equally be key to the resolution of some of the controversies that have lingered since that epochal day.

We want to state clearly at this point that there is a cardinal matter we must not lose sight of. That point is that those seeking to profit from sowing discord and chaos in Nigeria are depending on what they perceive as the collective short memory to carry out their evil act. They believe that they can continually manipulate the collective consciousness by deciding for the rest of us what the focus of public discourse should be.

This is the reason the contractors that had the mandate to hijack and use the #EndSARS protest to sow discord nationwide had deployed so much propaganda to create the impression that the CCTV footage from the night of the Lekki Incident has been destroyed. Please note that they had previously created so much furore with the lie that the CCTV Camera at the Toll Plaza has been vandalized or compromised such that it was not possible to have captured any recording.

What these crisis entrepreneurs relied on to peddle these lies was the removal of licence plate cameras by the Lekki Concession Company for safekeeping away from a destructive mob based on information that the facility was going to be vandalized. The social media wing of those that are trying to destroy Nigeria went to work and perpetuated the lie that the CCTV Cameras at the Toll Plaza was removed to allow the Army massacre protesters.

That lie about the CCTV being removed set the tone for the malicious fabrications about 78 people being killed in a phantom massacre. Note that till date neither DJ Switch nor the other paid for hire activists have been able to show the world where the remains of their supposed 78 casualties are interred. Hospital admissions of patients did not tally with the claim either do mortuary intake confirm the wrong claim. But it appears there is a resolution to rope the Army in at any cost.

It is the reason that the CNN fallacious special report did not come as a surprise to us because we had found out that the report was meant to undermine Nigeria ahead of the playing of the Lekki CCTV footage. We observed a concerted attempt to use that report as a distraction that will prevent Nigerians from knowing that the CCTV footage has been shown so that people can continue to persist in thinking that there was no video to tell the story of what happened that pivotal night.

We find it fortunate that we have been attending the proceedings since the inception of the panel, which allows us a holistic view of the information that it has collected so far. We also were able to view the CCTV footage and we can now speak from the position of being appropriately informed.

Since the video was shown all the propaganda deployed has been about how soldiers deployed to the location with seven trucks. There is no proof that protesters were massacred, there was nothing about human remains being loaded on any of the seven trucks, which has rubbished the claims of people like DJ Switch.  The video showed by the Lekki Concession Company has further vindicated the Army. The video did not show that anyone was killed. The number of trucks used to move soldiers to the Tollgate does not matter at this point.

We are therefore urging the Nigerian Army to get past the distraction of those that have been desperate to scapegoat it for the failure of their protests. It was important to have stopped the carnage that these people had planned for the country.