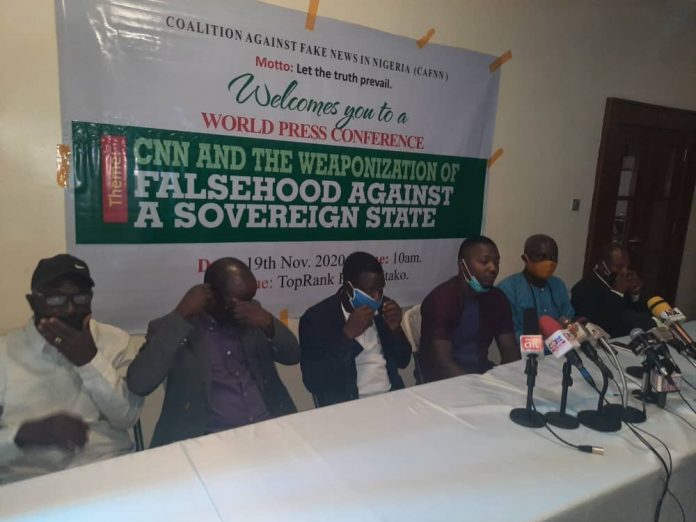 The Coalition Against Fake News (CAFN) has lashed out at Cable News Network (CNN) over its report on the Lekki shooting in Lagos State.

According to the CAFN, the American television channel was unprofessional and biased with its reportage that alleged that troops of the Nigerian Army used live bullets during the EndSARS protests.

Comrade Finba Edmond, its Executive Converner, speaking at a press conference on Thursday in Abuja, said the report by CNN is only a mere rehash of the existing narrative that has been faulted by different independent bodies in Nigeria and across the world.

According to the coalition, the video released on Wednesday was with the intent of misleading the general public, correlating an agenda bent on destabilizing Nigeria.

The coalition, however, warned Nigerians as well as the international community about distractors envious of the considerable gains recorded in the country in all aspect of socio-economic life.

It also urged Nigerians to come to terms with the realization that the nation is up against an “international conspiracy to derail and thwart our nascent democracy by sowing the seed of discord in the polity to cause a crisis of unimaginable proportion”.

The Coalition Against Fake News is holding this press conference given the recent video released by the Cable News Network (CNN) on the incidence at the Lekki Tollgate during the EndSARS Protests.

It is imperative that issues must be put in proper perspective for the generality of members of the public, and under no circumstance should Fake News be allowed to fester due to its negative consequences.

It must be stated that indeed there is a sinister motive by some vested interests to destabilize Nigeria and these individuals and groups have been most ferocious in this enterprise not minding the socio-economic implication of their actions.

Sadly, the CNN has ironically joined the bandwagon of fake news promoters with its recently released video alleging that soldiers used live bullets and fired into the crowd of peaceful protesters at the Lekki Tollgate.

The Coalition Against Fake News sees the action of the CNN as a mere rehash of the existing narrative that has been faulted by different independent bodies in Nigeria with regards to what transpired at the Lekki Tollgate.

What the CNN did was to tow the same line by aggregating videos that were already in circulation and introduced a slant that would give credence to the narrative that soldiers used live bullets and indeed deaths were recorded.

We are consequently constrained to believe that the introduction of the CNN into the issues at hand is as a result of the testimony of the Nigerian Army at the Lagos State Judicial Panel of Inquiry and Restitution which indeed out issues in proper perspectives.

The Coalition Against Fake News as an independent group that has devoted substantial time and resources to research on a wide array of issues of public concern in Nigeria is appalled that the CNN would undertake to spread Fake News with impunity with regards to the EndSARS protest in Nigeria.

The CNN not only attempted to turn the truth on its head, but it also delved into an area it has minimal understanding of the undercurrents and the subsequent escalation of violence that led to the destruction of properties as well as the loss of human lives.

It is also curious that the CNN report for inexplicable reasons elected to ignore the fact that the once peaceful protest was hijacked by some sponsored thugs and hoodlums that wreaked havoc through the burning of police stations in parts of Lagos state as well as the barbaric way police officers were murdered in cold blood under the guise of EndSARS protests.

This is indeed an indication that there is a lot that meets the eyes with the EndSARS protest given the fact that as the dust is gradually settling, the CNN has so decided to recycle the issues that are being addressed at the Lagos State Judicial Panel of Inquiry and Restitution.

It is our view that the recent video released by CNN is meant to serve the purpose of misleading the general public. It might not be farfetched if those vested interests that are bent on destabilizing Nigeria are the brain behind it.

That the CNN elected to be so used as a tool for the weaponization of fake news against the Nigerian state and her citizenry is indeed despicable and should be condemned by all discerning individuals and groups.

We wish to consequently inform all Nigerians as well as the international community that the recently released video by the CNN is indeed the handiwork of distractors that are envious of the considerable gains recorded in Nigeria in all aspect of our socio-economic life.

Nigerians must as a result of this come to terms with the realization that Nigeria is up against an international conspiracy to derail and thwart our nascent democracy by sowing the seed of discord in the polity to cause a crisis of unimaginable proportion.

It is also our considered opinion that the use of CNN to further their agenda against Nigeria is ultimately targeted at the Nigerian Army as an institution that has been protective of democracy in Nigeria.

It, therefore, comes as no surprise that the Nigerian Army is under constant and scathing attacks by individuals and groups with the ultimate aim of demeaning the efforts of the Nigerian Army so far in preserving the territorial integrity of Nigeria as well as the entrenchment of our nascent democracy.

The Coalition Against Fake News is using this medium to call on all well-meaning Nigerians to view the video by the CNN with a pinch of salt as multiple indicators suggest that it is sponsored against the interest of Nigeria. That the CNN has joined the fray of fake new merchants should give us a reason to be alarmed as the forces against Nigeria are more than we can imagine.

The Coalition Against Fake News wishes to state in unequivocal terms that the involvement of the CNN has indeed raised a red flag that indeed our democracy is under a threat of unimaginable proportion and hence the need for Nigerians to be wary of fake news merchants.

We must, at this point come to terms with the reality on the ground and join hands with the government in addressing the threat posed by fake news merchants, else we might all have ourselves to blame.

The CNN has by this action indicated that it has a bitter agenda in Nigeria. A word is enough for the wise.

I thank you all for taking out time to attend this press conference. The Coalition Against Fake News would continue to dissect issues of public concern in the overall interest of Nigeria.