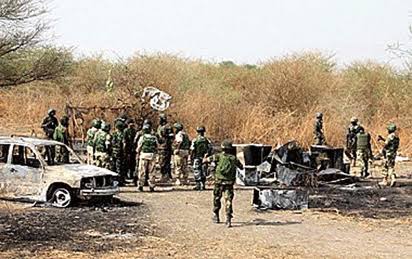 The Coalition Against Terrorism and Extremism (CATE) has hailed the Nigerian Army for another successful onslaught on Boko Haram terrorists in Marte Local Government Area of Borno State.

The centre, in a statement on Sunday, said the insurgents suffered decisive damage but urged the troops not to allow them to regroup.

Recall that troops of Operation Tura Takaibango in conjunction with Air Task Force Operation Lafiya Dole, on Friday night, eliminated scores of terrorists and destroyed seven of their gun trucks in the outskirts of Marte.

In a statement signed by its National Coordinator, Gabriel Onoja, CATE said the recent outing is a reminder that the terrorists are not superior to the Nigerian state and will forever remain criminals.

According to Onoja, the war against insurgency is approaching the final stages and all Nigerians have their roles.

The centre, however, advised that fleeing terrorists should be pursued into whatever warren they run into and be visited with what they have invited on themselves.

The CATE, therefore, called on the inhabitants in adjourning areas to be exceptionally vigilant to new persons arriving in their domains, some of whom are fleeing terrorists with a penchant for seeking cover and treatment in nearby towns and villages.

We commend the Nigerian Army and the entire Armed Forces for the success recorded in reminding the insurgent terrorists that they are not superior to the Nigerian state and will forever remain criminals who should be hunted down and neutralized for the safety and wellbeing of the people. We are confident that with the necessary support, the Nigerian military can continue to deliver this kind of cheery news to the country regularly.

CATE further notes that “reliable information” supplied to the troops made the military operation successful, which goes to the heart of what we have always advocated, which is for the general populace to constantly volunteer information to the military and law enforcement. The war against insurgency is certainly at a stage where the Nigerians have greater roles to play in defeating terrorism.

It is reassuring that the troops did not get carried away by the achievement of destroying 7 terrorists’ gun trucks and decimating numerous terrorists but have pressed on in pursuit of those that were escaping from the ISWAP/Boko Haram misadventure. Our position remains that such fleeing terrorists should be pursued into whatever warren they flee into and be visited with what they have invited on themselves.

Since some of these fleeing terrorists have a penchant for seeking cover and treatment in towns and villages, we particularly call on the people living in adjourning areas to be exceptionally vigilant to new persons arriving in their domains, especially if such persons are carrying war injuries. They should be given up to the authorities while communities in the northeast should also be more circumspect in providing accommodation or shelter to persons whose identities they cannot vet.

The prospect of defeating terrorism in the northeast and any other part of the country is anchored on preventing terrorists from recovering or regrouping after taking the kind of beating unleashed on them by troops in Marte. Members of the public are strategic to achieving this and it is best attained by supplying credible information to the military and starving the terrorists of the humanitarian support that they have used to recover from war injuries and regrouping.

Meanwhile, CATE is disappointed by reportage of some media outlets, social media influencers and bloggers who had rushed to credit ISWAP/Boko Haram with victory in the Marte encounter without recourse to the fact on the ground. The haste with which these group of people attributed the victory to the terrorists suggests that they had foreknowledge of the terrorists’ attack and had anticipated that they would inflict damages on the community as was the case in the distant past without realizing that the fundamentals have changed.

It is most unfortunate that certain individuals and organizations continue to act as if they are not citizens of Nigeria in the way they collide with terrorists by amplifying their murderous activities or even in some cases attributing phantom victories to the terrorists. We counsel such persons and organizations to stop their subversive propaganda activities and rally behind the Nigeria state to defeat terrorism.