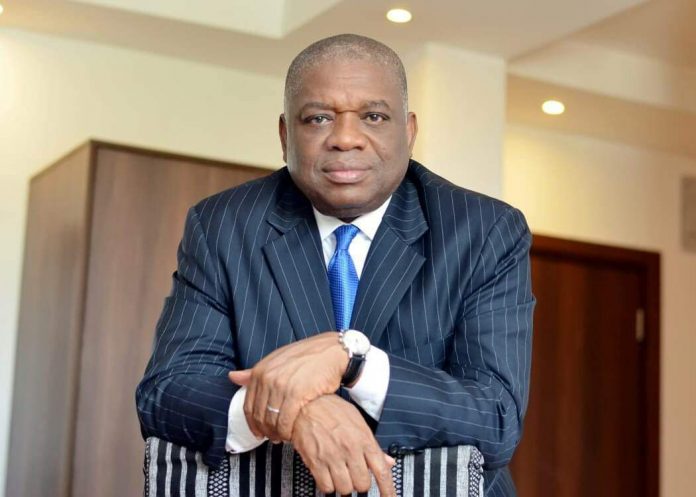 A coalition of several democratic groups have described Sen. Orji Uzor Kalu as a serial betrayal of the Igbo race in general and the people of Abia north Senatorial district which he is privileged to represent in the National Assembly.

The group which operates under the auspices of Coalition of Democratic Watchdogs for Electoral Reforms while addressing journalists in Abuja today, Monday, 8th August, 2022 stated that as the nation prepares for the conduct of 2023 general elections, the need for a true, fair and equitable representation has consistently eluded Nigerians across board.

Dr. Gabriel Nwambu, who addressed the media said the cardinal principle of civil society organizations globally is hinged on equity, fair representation of constituents and democratic principles and it is the quest for a true representation that has compelled the coalition to look at some of the unguarded utterances of Senator Orji Uzor Kalu, the Senator representing Abia North senatorial district of Abia state.

According to him, “in 2021, during the heated debate on Section 47 and 50(2) of the Electoral Act 2022 as Amended which dwells on electronic transmission of votes in the Senate, Senator Orji Uzor was one of the Senators who said in categorical terms that AbiaNorth had no network coverage. This was a blatant lie because Abia North has effective network coverage. It is also well known to Nigerians that Senator Orji Uzor voted against the electronic transmission of election results, an innovation introduced by INEC to reduce the rigging and manipulation of election results”.

He also said: “preparatory to the primary election that produced the Presidential candidate of political parties, the chief whip of the 9th Senate, Orji UzorKalu on camera displayed his loyalty to the Senate President; Dr. Ahmed Lawal. This was doneimmediately the APC party chairman, Adamumentioned that Ahmed Lawal was the consensus candidate. Kalu said that he would prefer to be a servant in the Aso Rock Villa, sweeping and serving Ahmed Lawal than exist as other Nigerians outside the Villa.

“For us as Igbos, we believe that such a statement from a man who is representing the good people of Abia North Senatorial district, doubling as the chief whip of the 9th Senate, Federal Republic of Nigeria is derogatory and demeaning to his constituents, people of Igbo extraction and Nigerian citizens in general. Mr. Kalu has not only subjected himself to ridicule but has reduced his constituents to mere servants.

“Now, Nigerians who stood up and spoke vehemently against the Christian/Christian or Muslim/Muslim ticket opined that for peaceful coexistence of all Nigerian citizens, for equity and fairness as contained in the Federal Character, 1999 constitution as amended, it is an aberration for any political party to field two persons of same faith as Presidential and Vice Presidential candidate respectively, as this is not consistent with fair representation and therefore could impair on national unity and peace”.

The Coalition wondered while the emergence of Bola Ahmed Tinubu as the candidate of the APC and his decision to field Kashim Shetima as a running mate against wide condemnation and public outcry against a muslim/muslim ticket brought in yet another utterance from Mr. Kalu.

“On National television, Orji Uzor was seen saying that even if his position would be against that of his bishop as a catholic and his people in Abia North, that he prefers the muslim/muslim ticket for his party to win the 2023 election and moreover, the wife of Tinubu (a pastor) would become the first lady who invariably for him, is like a deputy President. In other words, Sen. Kalu’s position is that Christians would be represented even when the office of the first lady is not recognized by the constitution of federal republic of Nigeria.

“Now, Senator Kalu is from Abia North of Abia state where 100% of his constituents are Christians. Our firm belief is that the essence of representing a people is essentially to speak the mind of your constituents. But nay, Orji Uzor Kalu consistently without recourse to the yearnings and aspirations of his people, has demonstrated that his personal interest supersedes that of the people who voted him to power. Moreover, the manner at which Kalu switched loyalty, the somersault from Senator Ahmed Lawal to Bola Ahmed Tinubu brings to bare the integrity of Orji Uzor to question. The speed at which Kalu started singing praises for Tinubu against his earlier servant disposition for Lawal brings to conclusion, the man Orji Uzor as a man of double standard”.

He reminded the Senator that Abia state farmers and residents have witnessed an alarming rate of killings in recent times perpetrated by Fulani herders. The Prelate of the Methodist Church was even kidnapped and a ransom of one hundred million naira paid to secure his release. The victim stated clearly that the men who kidnaped him were Fulanis.

The rest of the text of the address reads:

“Now, Orji Uzor Kalu has also laid claims to be the one who brought in the infamous RUGA to Abia state while holding sway as Governor of the state. This claim by Mr. Kalu is obviously to seek favour and be loved by some persons other than his own constituents who are killed on a daily basis, women are raped in farms, men, women, old, young, children are killed and decapitated in farms and homes, people are kidnapped here and there in Abia state, yet Kalu does not give a bulge. He doesn’t care, so long as the situation benefits him.

“Ironically, this same man, a calamity to the people of Abia – North, a disgrace to Christian Dom, a sell-out and selfish man is seeking a re-election to the Nigerian Senate…God Forbid! We reject such Calamity to befall us again.

“Orji Uzor Kalu (……) a man alleged to have peculated the treasury of Abia state, bringing the state to its knees and responsible for the state’s current economic, financial and security woes that has befallen Abia state is currently standing a re- trial of 7.1 Billion Naira theft. Whether he likes it or not; the 7.1 Billion Naira theft is still hanging round his neck”.