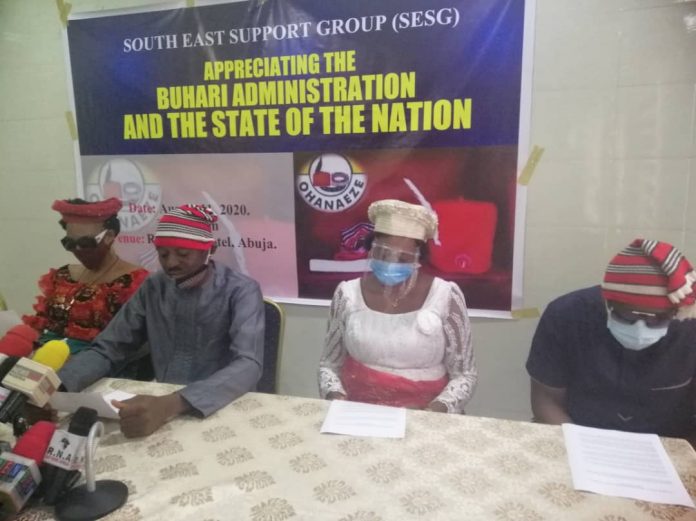 The South East Support Groups (SESG), a sociopolitical group, has called on all Ndigbo sons and daughters to support the President Muhammadu-led government and the Nigerian Army.

The group said the President Buhari administration is passionately pro-Igbo in words and actions, thus deserves the support of all Igbo people.
SESG said the president has demonstrated his love for the region by appointing Ndigbo sons and daughters into prominent federal positions.
Speaking through its National President, Emmanuel Ojukwu, at a press conference in Abuja, he also hailed the Nigerian Army, under the leadership of Lt. Gen. Turkur Buratai, saying it has become a blessing to the Southeast people and Nigeria as a whole in so many ways.

It specifically noted that the Southeast region are focal beneficiaries of the novel initiative of the Nigerian Army on Corporate Social Responsibility (CSR) projects in water, roads, and free health services.

The statement, therefore, called on all Ndigbo to support the current administration so as to enjoy more goodies from the Buhari-led government.

The statement reads in full.
It is a known fact to each one of us that no race or people bicker with their neighbours forever. In the past decades, we have been antagonistic, hostile, and opposed other tribes of Nigeria to assert or loud what we deemed as marginalization and injustice to the Southeast region.

This mindset has often pushed us into wrong political decisions and or; in recent times, our senses have been beclouded to the extent of making very poor political choices. The examples of our voting patterns in the 2015 presidential elections and even the 2019 presidential ballot bears ample testimony to the rejection of President Muhammadu Buhari, GCFR and the All Progressives Congress (APC) because of certain grudges we nursed.

Let truth be truth boldly. Nigeria’s political system and its reward mechanism subscribes unwittingly to the patronage of regions or zones or people who have actively supported a leader during the electoral process or at the point of enthronement of a leader. We have lived with this culture for ages.

Unfortunately, Ndigbo has failed on both scores. We renounced and assiduously worked against the Presidency of President Buhari twice. It is a reality we cannot dispute. We neither supported President Buhari nor the APC at the time of laying the golden eggs; but the rest of Nigerians did and they won. And therefore, by this partisan miscalculation and misplacement of our political priorities, Ndi’gbo became susceptible to the neglect of patronage or development largesse of the present government based on our peculiar leadership culture.

But President Buhari is a different kind of leader in our midst. He is a man with a kind heart, compassionate and feels for every oppressed Nigerian or group, regardless of tribe, religion or political affinities. So, he has overlooked our shortcomings and stiff opposition to his leadership quest and embraced the Southeast, more than any other part of Nigeria.

We dare say, President Buhari is passionately pro-Ndi’gbo and those still throwing darts at him are doing it to our detriment as a region and people. It is attestable through Mr. President’s utterances and actions.

Today, and for the benefit of generations upon generations of Ndi’gbo, the Southeast has become a huge construction site. It is needless to begin to list the numerous infrastructural projects such as construction of roads, hospitals, provision of pipe borne water, renovation of schools, constructions of bridges, gully erosion control projects and other social amenities the Buhari Presidency has executed or are ongoing in the Southeast.

These are clear testimonies of Mr. President’s passion for the Southeast people. Any one of us who has cause to travel home in the last five years will attest to it.

Furthermore, our sons and daughter are appointed into prominent federal positions. No long ago, President Buhari nominated our eminent daughter, Dr. Mrs. Ngozi Okonjo Iweala for the position of Director-General, World Trade Organization (WTO). She failed to clinch the appointment because of bureaucratic impediments; but it illustrates how dear President Buhari holds Ndi’gbo people.

Igbo nation has no choice than to embrace a leader with a good heart like President Buhari who has consistently shown to us friendship and true love as an unbiased leader. He has demonstrated to us that a true leader has no enemies or foes, but serves everyone without discrimination. May his days be long!

President Buhari has also not forsaken the issue of protection of lives and property of the people of Ndi’gbo. We can grandstand or pretend not to know. But the unalterable truth is that the Southeast morphed into a region famed as a den of armed robberies, kidnappings, violent agitations, cultism, communal clashes, and multiple other weird criminal acts which threatened the peace of the Southeast region.

However, in quick response to our lamentations and a cry for help, the President deployed the Nigerian Army, which moved in swiftly and saved us from the satanic grip and calamitous insecurity situations. We may recall that there was a time before the Buhari Presidency that our sons and daughters were afraid to visit home even at special seasons such as Christmas or New Year celebrations for fear of falling victims of armed criminal gangs.

We dreaded our region and the land of our ancestors like the land of the spirits. But President Buhari stamped his foot and we are now free people; we are liberated on our lands; the Nigerian Army has unchained us from these vicious armed gangs. And indeed, today, we can breathe that refreshing air of freedom and to conduct our legitimate businesses without the phobia of molestations or strangulations to death by some gun -trotting and trigger-happy criminals.

SESG boldly declares without any cageyness that the `. And there is the need for every one of us who are direct beneficiaries of the sacrifices of the Army to appreciate Mr. President and the Nigerian Army’s leadership for its numerous roles they have played for the security, peace and development of the region.

The Nigerian Army under the able, determined and focused leadership of the Chief of Army Staff (COAS) and leader of counter-insurgency operations, Lt. Gen. Tukur Yusufu Buratai is one institution in a million in Nigeria. The Southeast region are focal beneficiaries of the novel initiative of the Nigerian Army on Corporate Social Responsibility (CSR) projects in water, roads, and free health services.

But that is not all. The Nigerian Army is still planning more goodies for the people of the Southeast. Just a few days ago, we all witnessed the ground-breaking ceremony of the foundation laying ceremony of the Nigerian Army Reference Hospital in Abakaliki, Ebonyi state. It is conceived as a world class referral medical facility to serve both Military personnel and the entire civilian population of the Southeast region.

The benefits of this health facility to our people are too numerous. And Gen. Buratai is a leader who is repulsive to the syndrome of abandoning projects. He has ensured, whatever project the Army has initiated under his tenure is completed. By this antecedent, the Nigerian Army Reference Hospital will also be completed in record time as he promised and commissioned for public use.

Finally, SESG wishes to reiterate that the Nigerian Army has marketed itself as not just one of the most visible presence of the Federal Government in the Southeast, but has through its numerous CSR initiatives and projects brought succour to our people. The Army has assisted tremendously to scale-up development in the region.

Ndi’gbo has no choice, much less a reason to keep withholding support for President Buhari or the Nigerian Army. Sustained antagonism is not the panacea. The earlier we realize it, the greater prospects of the advancement and development of the Southeast region for posterity.