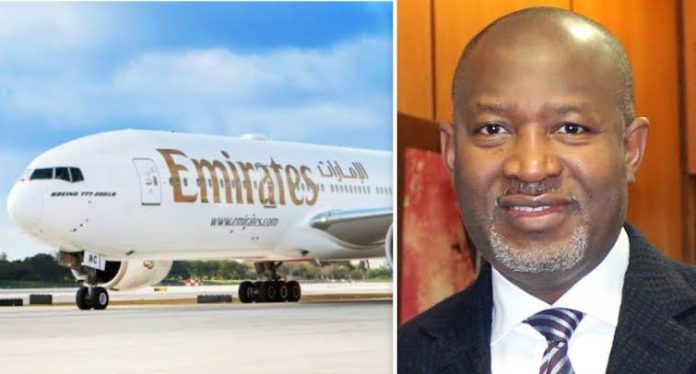 Minister of Aviation, Hadi Sirika has cleared the air on an offer by The Emirates on the proposed national carrier, Nigeria Air.

According to a statement Sunday signed by his Special Assistant, Public Affairs, James Odaudu the relationship cannot be anything other than an endorsement of the need, the zeal, and, of course the process for the national carrier project.

He added that the statement credited to the airline is also an expression of confidence of the international aviation community in the commitment of the Buhari government to the establishment of Nigeria’s national carrier.

The management of Emirates Airlines recently made an offer to partner with the Nigerian Government in its quest to establish a national carrier and this has elicited requests for clarification, mostly from the media and industry stakeholders.

Speaking recently during a panel session moderated by Richard Quest to discuss the future of Aviation at the Dubai Expo 2020, Tim Clark, President of Emirates said the organization would be very happy to help if any assistance was required in starting the national carrier.

According to Clark who was speaking in support of the position of Nigeria’s Aviation Minister Senator Hadi Sirika, the establishment of a national carrier is an almost compelling case for Nigeria, going by certain indices.

“Of course, Nigeria needs a National Airline. There is an enormous business case for the national carrier. Nigerians are seeking to travel all over the world. Nigeria is a power house of Africa. We are very interested in flying there because it is a rich nation in terms of demand for services,” Clark had said.

The Minister also sees the offer as an encouragement to the many bidders currently preparing their PPP bids for Nigeria Air in response to the recently advertised Request for Proposal.

The process for the acquisition of the Air Operator’s Certificate (AOC) and the Air Transport License (ATL) is well on course for the expected launch date of the airline, which Sirika has assured, Nigerians will be proud of.

“As has been repeatedly stated, the whole process for the establishment of the national Carrier, and indeed, all the projects under the Administration’s Aviation Roadmap, has been guided by the principles of transparency and accountability and this will remain till the final delivery of the project,” the statement added.