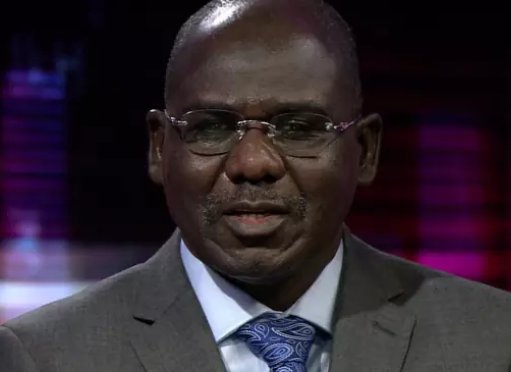 Nigeria’s Ambassador to the Benin Republic, Amb Tukur Buratai, has been tasked to swiftly hit the ground running, enhancing trade relations and trans-border security between both nations, especially around the Seme Border.

Passing a vote of confidence on the former Chief of Army Staff, the Nigeria First movement said Amb Buratai is tailor-made for the job owing to his vast experience in military and diplomacy.

Lt. Gen Buratai (rtd) and immediate past Chief of Defence Staff, Gen. Abayomi Olanisakin (rtd) were on Tuesday presented with letters of credence as envoys to Benin and Cameroon respectively.

And according to Nigeria First, Buratai’s confirmation shows that President Muhammadu Buhari was satisfied with his performance as COAS, having effectively flushed out insurgents and other criminal elements from the North-East and other parts of the country.

Speaking on behalf of the group at a press conference on Friday in Abuja, Secretary-General, Comrade Augustine Richard Adie, noted that Buratai’s appointment is a welcome development at a time the nation’s border is under several threats.

Adie added that with Buratai, trade relations between the two countries will be strengthened more than ever, leading to more foreign exchange for Nigeria.

Recalling his stint as Army chief, Adie hailed Buratai for a successful campaign against insurgency in the country which has translated to peace and security to several parts especially in the once-troubled North-East

He, however, advised members of the opposition party and other disgruntled individuals to stop the campaign aimed to malign Buratai’s image.

Expressing total confidence in his ability, the group called on all Nigerians to extend support for the country’s new Ambassador to the Benin Republic.

Nigeria First, heartily congratulates Ambassador, Lt. Gen. Tukur Buratai (rtd) on his recent appointment. We are happy to finally acknowledged that “the Best man for the job has finally arrived”.

Knowing about the way Nigerians have continuously expressed their enraged feelings about the matters of insecurity in the country, ever since when Boko Haram insurgency has taken the country unaware since 2009 when they began a violent campaign in North-East Nigeria, everyone now believes in every reason to tighten up our security portals.

Having fought a good fight to subdue and weaken internal terrorism and banditry in the country, President Muhammadu Buhari took a great strategic move on this appointment because he was satisfied with your performance and your great knowledge of international diplomacy.

Therefore, Mr President saw the need to expand frontiers in the war against insurgency in the country, which in our opinion culminated in the appointment of the former service chiefs as non-career ambassadors to galvanize the much needed regional support at addressing the threat posed by the Boko Haram insurgents.

For the record, Nigeria has never experienced a much peaceful time as compare to when Buratai was Chief of Army Staff since the rampage of Book Haram had begun.

Nigeria is still battling insurgency even with the change of Service Chiefs that most Nigerians had clamoured for. And was that the solution? Has that changed anything?

Instead, the situation has remained stagnant and getting worse as some stipulated by many.

The appointment of Ty Buratai is a welcome development in terms of the development of diplomacy and national security.

His appointment at a time when Nigeria’s border is under several threats is a wise decision made by the administration led by President Muhammadu Buhari. This move is vital and strengthens trade relations between the two countries.

Buratai is the ideal candidate for this position owing to his vast intellect and diplomatic skills. The current position to which he has been recently appointed must be handled delicately. It requires someone with profound intellect and experience. We are happy that Buratai has been chosen as the man for the job.

This is a man that served the country as a military leader without a blemish on his entire career. This is the right reward for a man who has served his country diligently and to the best of his abilities. This is a man who has given his all to the nation and we have no doubt that he will do the same in his current position.

However, despite the flawless record of this man, his appointment has been bathed with opprobrium by several individuals who believe that he is not fit for the job for several reasons best known to them. There have also been several claims that his appointment is all in a bid to protect him from prosecution for crimes wrongfully alleged against him. These, we believe are the evil efforts of several members of the opposition party and other disgruntled individuals to sully Buratai’s image. These individuals have failed to see the bigger picture but have instead chosen to allow politics and senseless sentiments to blindfold them. These individuals are only after their interest instead of national interest. Nigeria is currently in a delicate situation presently. The country has been plagued by insecurity and corruption amongst others and senseless political propaganda should not be added to the list.

Buratai’s appointment is a promising development as it has a lot of potential advantages, one of which is the fact that the former chief of Army Staff has a vast network of friends and acquaintances globally. This is a great boost in terms of diplomacy and will be very beneficial in his current position.

Buratai has a lot of unique skills in his arsenals such as his vast wealth of experience as a war veteran, a peacekeeper, an administrator and his efficiency in maintaining order and stability in conflict-ridden areas around the country. These skills will be very vital when it comes to his orchestration of diplomatic relationships and strategy.

Let us all not be quick to forget his successful campaign against insurgency in the country and how he managed to bring peace and security to several parts of the country especially in the northeast. During his reign as the chief of army staff, he moved his base to the forefront of the war where he managed to defeat and wipe out many terrorists especially the one hidden in the enclaves of the Sambisa forest.

Instead of the fight against insecurity, those of us familiar with the dynamics and state of play in the international arena will see the wisdom behind his appointment. It is a wise move to involve the international community in the fight against terrorism and banditry by appointing an individual who is conversant with the necessities of Nigeria and the various areas in which support is needed.

Several businessmen and women have been clamouring over the closure of the Nigeria-Benin Republic border and have explained how the border closure has affected their business. We can boldly say to you all that have faith in Buratai as all issues regarding the Border closure and trade relations will soon be resolved.

Nigeria’s lost revenue to the Benin Republic has been a troubling issue to the country. It goes without saying that no nation can survive without its foreign exchange earnings and Nigeria is in no way an exception. We are certain that the ambassador will employ his sagacity and diplomatic skills to see to the re-opening of the Nigerian-Benin Republic border as soon as possible.

Buratai has been a loyal and patriotic servant to the people of Nigeria. His records and portfolio are excellent. He boasts a lot of skills, expertise and experience. He made incredible contributions towards the establishment of the Nigerian Amry University which greatly improved pedagogic approaches towards tackling insurgency in the country. His leadership boosted the morale of the Nigerian army and greatly influenced the war against insurgency. The time he served as a service chief has been widely regarded as one of the most productive in the annals of the Nigerian army. Under his leadership, the Nigerian army was rated high as regards human rights compliance by various international bodies. This was achieved as a result of his establishment of human rights offices to address issues regarding human rights violations by officers. This is another example of the insight the man portrays.

Nigeria plays a strategic leadership role in Africa and the appointment of a man as sagacious and experienced as TY Buratai ensures that Nigeria cements its place as the giants and leaders in the African continent. It is well known to all that Nigeria is a country looked up to owing to its portfolio, thus, the appointment of Buratai as a representative in the Republic of Benin is a step in the right direction.

It makes much strategic sense because we would be sure that Buratai would put his wealth of knowledge to bear, especially in addressing some of the issues of concern for the country regarding Boko Haram getting logistics support outside the country.

Ambassador Tukur Buratai remains a great asset to our country because of his deep foresight on national security. He is also a military historian, and thus good that he has offered himself once again in service to the country.

Nigeria First expresses total confidence in Buratai as a model of patriotism and chauvinism. His many accomplishments are a testament to the fact that his appointment was the right decision by the current administration. We call on all Nigerians to extend their support to the newly appointed ambassador rather than greet his appointment with baseless criticisms. Let us also continue to provide our endless support to the current President of this great nation and his administration as they work tirelessly for the growth and development of Nigeria.