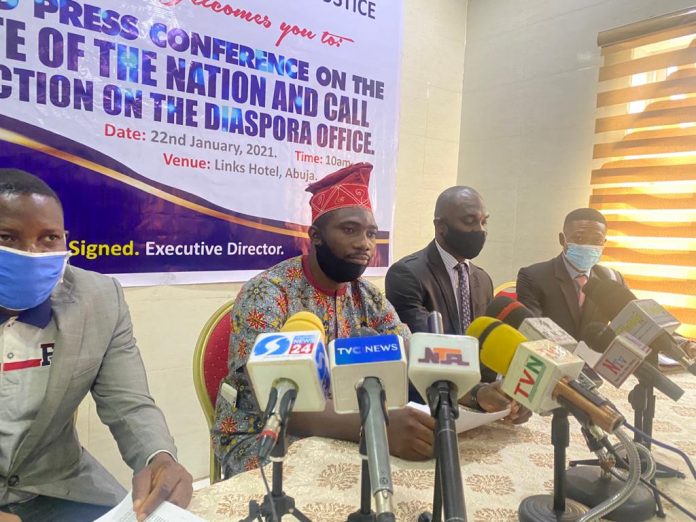 The Coalition for Truth and Justice (CTJ) has called on Nigerians to rise against negative influences and interferences in the Diaspora who mean no well for the country.

The coalition gave this charge at a press conference on Friday in Abuja.

According to Executive Director, Comrade Dominic Ohene, Nigerians abroad no longer display patriotism but malicious influence, surreptitiously eating the heart of the nation and contaminating the youths.

Speaking further, Ohene recalled how these tactics almost worked during the EndSARS protests last year after these Nigerians hijacked and escalated the exercise.

While citizens of other nations uplift the image of their country, the CTJ said most Nigerians outside the shores have elected to attack and set their home in flames.

More worrisome, Ohene noted that the Nigerians in Diaspora Commission (NIDCOM) have assisted these elements to achieve their course, availing its offices as a staging point for attacks against their home government.

The CTJ, therefore, charged all Nigerians to stand up in solidarity to say enough is enough to the adverse impact of the Diasporas in our country.

While calling for strict sanctions on these Nigerians, the coalition recommended that all Diaspora groups and offices must be overhauled and replaced with more competent people willing to work earnestly and efficiently for the interest of the country.

It, however, urged all Nigerians to work together and support President Muhammadu Buhari’s led administration for the peace and prosperity of our dear country Nigeria.

The present epoch could reasonably be referred to as the diasporan age. The age of mass movement from one country to another. The age where citizens can represent their mother countries while residing in another, the age where their actions and voices can be heard, and cause tremendous affect either positively or negatively.

As a matter of fact, these effects have to lead many nations to look into the meanings birthed by the word “Diaspora”, especially meaning with dispersal, immigration, expatriate, refuge, exile, and ethnonational communities. There is no doubt that all these are more or less part of the intrinsic dynamics of a diaspora community.

Be that as it may, membership of a contemporary diaspora now implies potential empowerment based on the ability to exert socio-economic and political influence in both the homeland and the host and.

Indeed, we all know that diasporan historiography and discourses have grown exponentially in recent times. Despite this impressive historiography, the Nigerian diaspora has largely been subsumed under the general categories of studies dealing with Africans or Blacks living outside the shores of Africa.

The Coalition for Truth and Justice feels disturbed and very concerned about the soiled-Nigerian-garment by many Nigerians in the diaspora. It is said that “A good name is better than gold and riches…”

Unlike how Interestingly it used to be, that members of the Nigerian diaspora were heavily involved in transnational activities that effectively integrated their countries of origin with their host countries. They, therefore, became not only veritable agents of poverty reduction but a key player in the process of Africa’s socio-economic transformation and development, thereby playing a pivotal role in the process of integrating the African continent into an increasingly globalized world.

Unfortunately, it is very heartbreaking to see that this precious historical legacy has now been thrown to the swine just because of the selfishness of some bad urchins that seek after their own political aggrandizement.

The awful thing about this is that they bring their bad culture to Nigeria. They exhibit the most appalling behaviour and this only succeeds in eroding the personalities of our youths. They have chosen to use social media as a means of spreading false information and propagating misleading propaganda. Their only aim is to implant a lawless society in Nigeria. Their only aim is to ensure that their fat cheques keep coming from their sponsors. It is most unfortunate that these evil political sponsors are hiding behind the façade of being democrats when in reality they abhor the very tenets of democracy, which is why they are keen on using crude tactics to overturn the mandate that Nigerians gave the government.

During the EndSars protests, the diasporas shamelessly attacked the Nigerian government.  They also conducted needless protests in their respective countries of residence. These actions only helped to further instigate the young men and women protesting which eventually turned violent and bloody. Their many witless posts on social media escalated the protests into a mini-revolution. But thanks to the prompt mobilisation and efficiency of the Nigerian security personnel, the situation was promptly arrested.

The sad thing about all these is that a majority of these people in the diaspora are outcasts and renegades who escaped to foreign countries after committing various atrocities. Many of them were armed robbers, rapists, school dropouts and lazy louts. These are unrepentant people with past criminal records, and they refuse to desist those act, but tend to continue such without giving it a second thought of the harm they are causing the society. Some of them are people who either failed in their businesses or their careers and therefore migrated overseas in search of greener pasture’. We call on every patriotic citizen to think it deeply that, If these people failed to make a significant impact in their country, of what value could they possibly be in other countries? They have nothing to offer.

There has never been a group of people that mindlessly rained abuses on its own government from the shores of other countries. Every Nigerian citizen whether in the diaspora or not must do their best to be patriotic citizens by uplifting the image of the country rather than tarnishing it. The actions of the diaspora community especially in recent times is condemnable.

Patriotism is the sine qua non of every Nigerian citizen but the diasporas have shown us times without number that they lack it. This lack of patriotism has made many of the diasporas to act with such reckless abandon.

The shocking thing is that the diaspora groups and organizations such as NIDCOM have done little to curb this menace Nigeria is faced with. They have failed in many regards especially in identifying these rogue elements that are working against the interests of the country. Rather, the diaspora office has become an avenue for disgruntled elements to congregate against the interest of our country Nigeria. The diaspora offices have become a staging point for attacks against their home government. They are just opportunists who are only concerned with pursuing their own personal interests. The result of these acts of theirs has led to the unwarranted temporal ban on our dear country by some countries, and these have affected some meaningful Nigerians that had good visions and plans on how they would have made great exploits.

We stand here before you all today to tell you that a stop must be put to the actions of these diasporas before things get out of hand. It is of paramount importance that this situation is tackled headlong and fast. If possible, the leadership of the use the social media to stir the pot of disharmony in the country.

We must all stand up in solidarity to say enough is enough to the adverse impact of the diasporas in our country. To ensure our patriotism is unshaken, the Coalition for Truth and Justice is reminding every Nigerian that this is not a one stakeholder’s affair or fight, We are hereby calling on all Nigerians both in Nigeria and in the diaspora to work together and provide all the needed support for President Muhammadu Buhari led administration for the peace and prosperity of our dear country Nigeria.