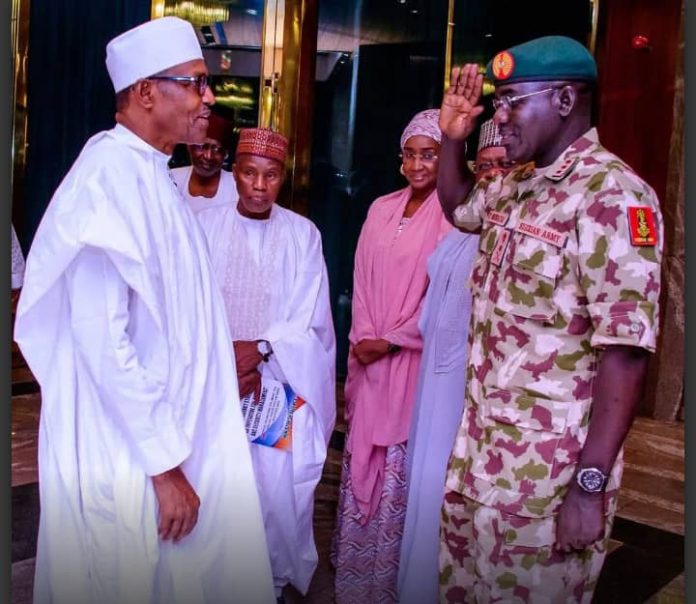 Babangida it was who introduced the Structural Adjustment Programme, SAP, devalued the naira, introduced the Second Tier Foreign Exchange Market and privatized many sectors of the economy.

But when all these did not post the desired result on the economy, he threw his arms up in surrender in that statement that portrayed his helplessness.

Fast forward to 27 years later, the country’s economy, which seemingly defied five administrations after Babangida and countless policies and strategies betrayed its rigidity, as they say in medical parlance, began to respond to treatment.

Two things, according to experts have made the difference in the approach the current administration has adopted which are impacting positively on the economy.

The first is the integrity of the man on the saddle, President Muhammadu Buhari and the second is his well known zero tolerance for corruption.

Whereas past Nigerian leaders have been able to come up with beautiful economic policies and programmes, such have failed to yield positive results due to the lack of discipline and moral rectitude required on the part of the leadership to see them through.

However, unlike others, Buhari came tailored-made for the job. Since his days in the military where he served in many credible positions including the federal commissioner for petroleum and natural resources to when he left office and served as the chairman of the Petroleum Trust Fund (PTF), the president has shown that he cannot be enticed with material things to shift focus from doing his job creditably well and can go to any length to ensure he protects the people’s interest.

With that sense of commitment, he has been able to churn out results in any assignment. It was for instance during his time at the petroleum ministry that many projects including federal government’s investment in pipelines and petroleum storage infrastructures and the building of about 21 petroleum storage depots all over the country from Lagos to Maiduguri and from Calabar to Gusau were done and when he became chairman of the PTF, it is on record that the project executed by the fund far surpassed the expectations of even the administration that established it.

Nigerians became nostalgic for a repeat of the Buhari leadership when they recounted that after he left office as Head of State, no administration has rivalled his commitment towards developing the country.

Since he was swoon into office in May 29 2015, the story of Nigeria has changed. The economy which was in doldrums began to show signs of recovery; states which could not pay salaries were helped to do so through the provision of bailout funds; small and medium scale enterprises began to boom and the agricultural sector was opened up through investment-friendly policies.

The power sector which had drained huge resources in the past without reciprocal improvement, quickly picked up as thousands of megawatts of power were not only added to the national grid but transmitted and distributed to consumers. That’s not all, though.

The petroleum sector recovered from its convulsion with just a push as queues at the filling stations completely disappeared and availability of petroleum products became the new order.

Corruption which defied many administrations was forced to take the back seat when the Treasury Single Account, TSA, was introduced and those who stole from the public till in the previous administrations were made to face the wrath of the law.

Not less than 8,000 ghost workers were uncovered in the public service and many public servants who were benefitting from corrupt practices of the past, living large at the expense of others, discerning that a new sheriff was in town, repented and adjusted their ways.

But perhaps the greatest legacy for which the current administration would be remembered for both now and in many years to come is on the aspect of security.

Prior to 2015, the security situation in the country was so embarrassing that Nigeria became a laughing stock the world over.

Its soldiers were the butt of jokes in other nations including even smaller African countries due to lack of motivation, poor welfare, inadequate equipment and training as well as corruption. Troops battling terrorists in the country and in the Lake Chad region were forced to abandon the fight to flee into other countries for safety.

Several communities in the North eastern part of the country were taken over by insurgents who boasted with glee that they are on the verge of carving out another country out of Nigeria as the then administration looked on helplessly.

The terrorists not assuaged by their takeover of communities on the fringes of the Lake Chad penetrated further into the country spreading the bloodletting activities to many states in the Northwest and Northcentral parts of the country and capped it all with their heavy presence and operations right in the heart of the federal capital in Abuja.

It was an all-time low for Nigeria as many infrastructure like roads, bridges, schools, hospitals and communication facilities were destroyed by the insurgents in addition to the many killed and the thousands abducted, raped and terrorized.

President Buhari, well aware of the crisis when he resumed made the issue of security part of his inaugural speech, promising to deal with the situation and promised to relocate the military command to the theatres of war.

He also searched hard to fish out those who would help him attain the goal of freeing Nigeria from terrorism that was making life so difficult for a vast majority of the populace and he appointed Lt. General Tukur Yusuf Buratai among other service chiefs, as the Chief of Army Staff. Jackpot

That was the watershed. The narrative on the war on terrorism, insurgency and sundry other crimes suddenly took a different twist.

The terrorists that were making videos of their exploits including bombing of significant edifices like the United Nations’ office, the police headquarters both in Abuja and attempt at attacking the office of the DSS began to flee as the heat turned on them.

They were in no time forced to evacuate from the FCT as the heat became unbearable. Their weekly rit/ual of blowing up worship centers in an average of one per week vanished and their threats to bring down the country fizzled out as the military took the war to their base and entered their fortresses in Sambisa Forest and the Mandara Hills.

The so called capital of their caliphate in Gwoza was overrun to the extent that the leader of the Boko Haram, Abubakar Shekau abandoned his location with his tails between his legs leaving behind his cherished flag and Quran which were retrieved and presented to the President by the Chief of Army Staff.

All the 20 local government spread between Adamawa, Borno and Yobe States which were under Boko Haram control were recaptured by Nigerian troops and all the communities liberated. This saw to the drop on the population of people at the Internally Displaced Persons, IDP, camps as many returned to their homes and communities.

The Buhari administration through support to the military and other security agencies also saved Nigeria from the threat of secession from some disgruntled elements in the Southeast and put a permanent stop to their criminal activities while the head of the outfit, Nnamdi Kanu fled.

Each time the terrorists made futile attempts to bounce back through surprise attacks on certain towns and communities, the military showed resistance and resilience, turning around attacks on Biu, Damboa, Garkida, Michika and other places.

People in these communities have seen more than an actionable assurance that their security is now guaranteed and never have failed to thank the Buhari administration for that.

As the heat became too much on the terrorists, they resorted into harassing villages on the fringes of Nigerien borders in Katsina, seeing that they are losing their grip on all fronts. President Buhari, unrelenting, equally ordered for operations in that area that would took care of that problem permanently.

Indeed even residents of places far away from the North east like Abuja, Kaduna and Kano have also had a cause to remember what transpired in the years gone by and to thank the Buhari administration for the wonderful job it is doing which has made life more meaningful and secured for them.