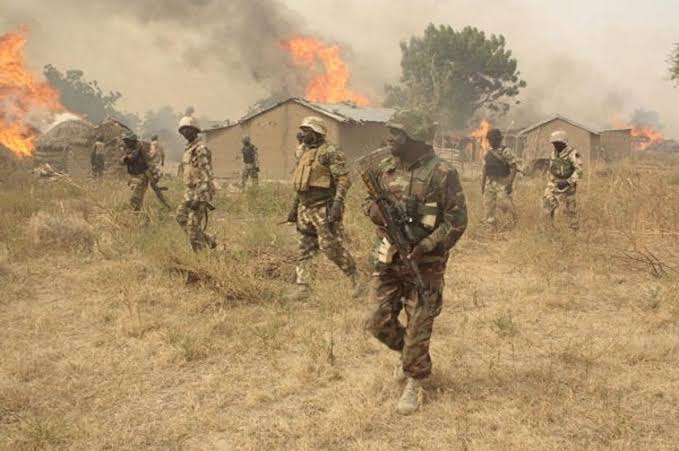 The North East Development Agenda (NEDA) has called on the police and political leaders in the northeast to build on the tremendous achievements of the military in the region.

NEDA gave the charge in a statement signed by its President Alhaji Ali Tanko on Sunday.

Nigeria’s once troubled northeast zone, a supposed stronghold of Boko Haram/ISWAP terrorists in years past is now enjoying relative peace and tranquillity thanks to the gallant Nigerian Army.

However, NEDA believes this progress would be tainted without the support and collaboration of other actors such as the police and the elites.

According to the group, these terrorists have abandoned the fight and fled inwards into Nigeria’s other towns and villages where troops are not stationed.

As it isn’t the role of the military to carry out civil policing, NEDA reckoned that the cooperation of the police and the leaders is required to fish these fleeing terrorists.

The group, therefore, called on the Nigeria Police Force and political leaders from the region to immediately swing into action to consolidate on the gains made by the military in keeping the area free of Boko Haram.

The progress that has been made by the Nigerian Army and other services of the military in ridding the north east of Boko Haram has been reassuring given the scale on the terrorists have been killed and their camps decommissioned. But there is urgent need to act in ensuring that there is no vacuum created in places from where Boko Haram elements ts have been eliminated.

The North East Development Agenda (NEDA) is consequently calling on the civil police, being the Nigeria Police Force and political leaders from the region to immediately swing into action to consolidate on the gains made by the military in keeping the area free of Boko Haram. A delay in doing this will make everyone that failed to take action liable should there be a resurgence of terrorism in Nigeria.

The military remains in pursuit of fleeing terrorists as it continues to drive the battle deeper into anywhere that Boko Haram is found to have a presence. Some of these terrorists apparently abandoned the fight and fled inwards into Nigeria’s other towns and villages where troops are not stationed. This is an area in which the political leaders are needed to galvanize the people into providing useful information that will help security agents mop up these fighters.

We also know that the military is not meant for everyday civil policing neither are troops trained for such, which makes it necessary for the Nigeria Police Force to step in and complement the efforts of the military by immediately taking over civil policing to ensure that the fleeing terrorists do not regroup anywhere near the north east again. The emphasis here is that the Police does not have to wait for a Presidential directive or National Assembly motion to resume its statutory duties in the north east now that the terrorists that once put the situation there beyond the functions of the police have been decimated.

What was experienced in the past was a situation where terrorists rebuild their cells from towns and villages that were not adequately policed after the military had cleared them of terrorists. This is a mistake that must not be repeated. A visible police presence, coupled with the necessary structure for intelligence gathering, will be a natural deterrence to any aspiring terrorist not to test the strength of the state.

From all available reports on the ground, the military has won the war against the Boko Haram terrorists and conscious efforts by the political leadership to restore normalcy must be immediately put in place as to forestall the negative consequences of the terrorists ever regrouping again.

In this regard, the political leadership should show direction by speeding up the rebuilding efforts and economic expansion in the north east to address the poverty that made Boko Haram’s recruitment of frustrated and desperate youth easy in the past. For this purpose, political leaders in the region should embrace a sort of peer review mechanism that ensures that public resources are used only for what they are meant for, which is to bring about improvement in the life of the people.

It is equally necessary that politicians collectively commit to engaging in acts that can re-introduce terrorism to the area. The practice of giving tacit support to Boko Haram members or any violent group out of political desperation has to stop while political office holders must also desist from a tendency to politicize anti-terrorism measures as this has proven to be a great disadvantage to the society.

The political leadership must also mobilize the traditional and religious institutions to contribute to the restoration of lasting peace in the north east. The traditional institution can be empowered to keep track of the youth ward by ward such that anyone showing tendency of radicalization and extremism can be immediately helped with rehabilitation. The religious leaders on their part can help correct their colleagues that are involved that are involved in promoting extreme doctrines.

This arrangement would be greatly strengthened if the police prioritizes intelligence gathering and building a network of community volunteers to create a viable information network and a kind of participatory policing in the communities.

Such a synergy among these critical stakeholders is the greatest thank you gift that they can give to the Nigerian military and the troops that have made the supreme sacrifice to get rid of terrorists that once held the north east by the jugular.