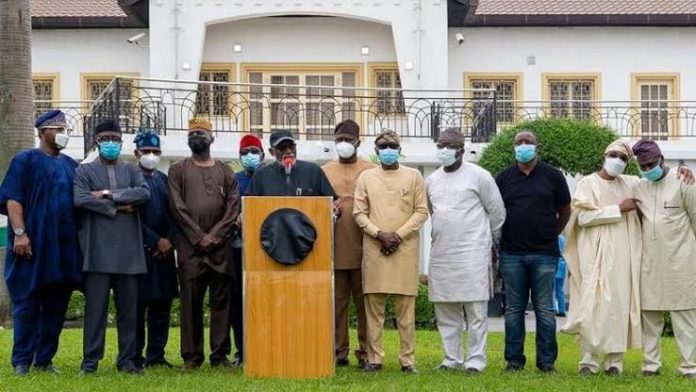 The Coalition of Northern Patriots (CNP) says South-West ministers have displayed gross disloyalty to President Muhammadu Buhari with their demands in the aftermath of the Lekki toll gate shooting in Lagos State.

Describing the act as a “show of shame”, the coalition advised the ministers to apologise honourably else have seven days to quit their offices.

The group gave the ultimatum at a press conference on Thursday in Abuja.

Among others, the ministers had demanded that the Federal Government support businesses affected by the arsons and lootings in Lagos as well as commence a probe into the involvement of the military in Lekki.

In his address, Alhaji Nurudeen Dodo, leader of the Coalition of Northern Patriots (CNP), lamented that the ministers are pursuing destructive blackmail of the Presidency with their regional political agenda.

The coalition said the cabinet members’ demands are “extremely outrageous, insensible and a blackmailing stunt of the Presidency”, especially after they have abandoned their primary mandate.

It, however, warned that the Nigerian military can not be left in the mercy of these “selfish” ministers to use as political punching bags or diabolical manipulations.

It added that the forum has only proven to Nigerians that they are in Buhari’s Government for their selfish regional agenda.

The Coalition of Northern Patriots (CNP) views with serious revulsion and objections from the outset to the position and demands of the forum of Southwest Ministers serving under the administration of President Muhammadu Buhari, GCFR in the aftermath of the #EndSARS violent protests which rocked some parts of Nigeria, particularly Southern states.

The Southwest Ministers were mandated by President Buhari to relocate to their home states to dialogue with aggrieved youths protesting over Police brutality and the excesses of the Special Anti-Robbery Squad (SARS). The Ministers were also mandated to pacify the restive youths and meet with other stakeholders have morphed into a pressure group who have jointly placed certain demands before the Federal Government as reparation for the deliberate damages inflicted on these areas by the insane demonstrators.

We are informed that the Southwest Ministers tabled to  President Buhari at the last Federal Executive Council (FEC) meeting demands such as initiating an investigation in the alleged shooting incident at Lekki Toll Gate with focus on the role of the Nigerian Army in the saga and should assist businesses affected by the arsons and lootings by the insane and violent #EndSARS protestors. But the Minsters were silent on the prosecution of the perpetrators.

Furthermore, and most uncharitably, the Ministers also imposed on the FGN the burden of supporting  Lagos State to replace damaged facilities particularly the ones concerned with the administration of justice and also, consider short to medium term support to small and medium businesses affected by the looting and arson which took place in Lagos among a motley of other demands.

The Coalition of Northern Patriots is stating that based on the prevailing economic crunch precipitated by the negative hangover effects of Covid-19 pandemic on global economies and scarce national resources, these demands are extremely outrageous, insensible and a blackmailing stunt of the Presidency embarked upon by the Southwest Ministers. Not every struggle is achieved through violence and that’s why most Nigerians deemed the magnitude of the #EndSARS protests and its attendant violence unnecessary.

Conscientiously, we shall not bow to regional emotions or agenda by persons or groups and stampeding the Presidency with such illogical demands is most inappropriate at this time. The truth must be told that the leadership at the regional and state levels, especially in Southern part of the country sat back, and preferred to ginger and supervise the #EndSARS protests morph into violence, killings, arsons and destructions in the pretext of the expression of grievances under democratic freedom, only to excuse it as the infiltration of a hoodlum.

Worse of all, when the #EndSARS protests overly turned bloody, some veiled and overt political forces urged them on, instead of preaching peace and cessation of the mayhem. It is unfair and counter-productive to further stress a government already at the point of fiscal suffocation.

Nevertheless, we empathize with families of those who lost their lives in the mayhem and Nigerians whose businesses/investments were torched by the “protesting” hoodlums and vandals.

But the demands of the Southwest Ministers are completely callous and a further confirmation of the grand plots to undo the Presidency animated in another way after the organized violent street demonstrations to cause destabilization, compromise national security and possibly, dethrone the incumbent Government via undemocratic means.

The political undertones as marketed by instigators of the violent #EndSARS protests have not dissipated in our psyche and we perceive the weighty demands by the Southwest Minsters as a continuation of this unacceptable and regressive agenda.
Nigerians generally must never fail to understand that every action has repercussions.

The sponsors and instigators of the virulent #EndSARS protests had no cogent reasons to continue fueling the violent demonstrations’, especially when Mr President acceded and took practical actions immediately in addressing some of the Five-point demands of the protestors. We cannot allow anybody to push the real cost of the orchestrated “madness” they actively supported back to the Federal Government.

Some of the generative reasons adduced by the protesters reflected in hashtags like #EndPoverty or #EndBadGovernance and so forth. Nigerians witnessed the frustration of the efforts of the Buhari Presidency in alleviating poverty, including the shameful hoarding or warehousing of Covid-19 palliatives dispatched to states to cushion the effects of the lockdown, instead of distributing it to the targeted poor of the poorest Nigerians.

Much more, some of the Southwest Ministers who endorsed the propagative demands have been ex-Governors, Ministers or held other top leadership positions, but abandoned their people to poverty and misery, by also hoarding or misappropriating public funds meant for the development of their constituents. The side effects were the demons which sprouted in the guise of #EndSARS protests. They should bow their heads in shame and let everyone bear his brunt.

The Coalition of Northern Patriots minces no words to intimate these Southwest Ministers that President Buhari and the Nigerian Army cannot be abandoned to their mercy as political punching bags or diabolical manipulations.

The Ministers have only exhibited and shown to Nigerians that they are in Buhari’s Government for their selfish regional agenda. It explains why they have continued to undermine the President’s development efforts. And pushing for a special investigation of the Nigerian Army over the alleged Lekki shootings and killings is clearly outside mandate Mr President sent the Ministers on the mission and this should resound in their brains thunderously.

This is the first time Nigerians are getting to know about the existence of the shameful Southwest Ministers Forum in her history. Could these Ministers have ever mustered the courage to twist such a Presidential assignment to the pursuit of regional agenda, assuming Chief Olusegun Obasanjo or Dr Goodluck Jonathan were still President of Nigeria?  Did any of the Ministers ever parroted in this manner when Obasanjo or Jonathan held sway at Aso Rock? The kindness of President Buhari should not be over-exploited for any reason.

The Coalition of Northern Patriots is hereby calling on the Southwest Ministers to honourably resign their positions from the cabinet of President Buhari to face the cherished individual and regional interests. Their actions have lucidly demonstrated that they cannot be trusted by the Buhari-led Federal Government of Nigeria.

If these Ministers fail to willingly resign with 14 days, the Coalition of Northern Patriots would not hesitate to call on President Buhari to sack them from his cabinet hence they have proved themselves as black sheeps in the fold.