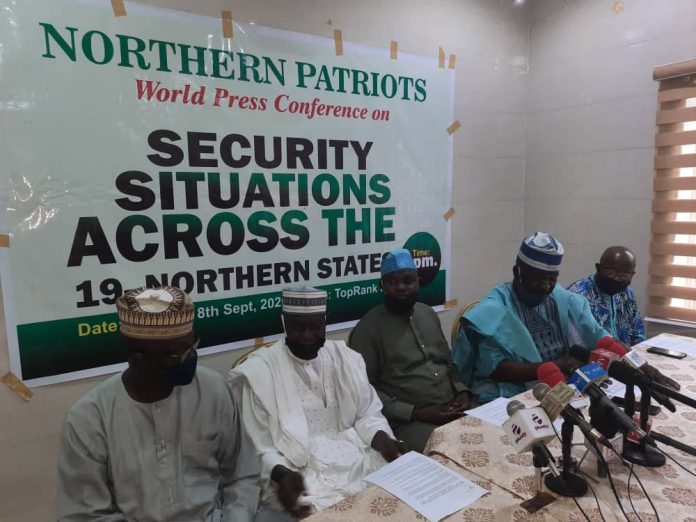 Some well-meaning Nigerians, under the auspices of Northern Patriots (NP), have hailed President Muhammadu Buhari and the Security Chiefs for the improved security in 19 northern states across the nation.

According to the group, the series of meetings held between the president and the Service/ Security Chiefs has triggered a remarkable turnaround with troops dominating the theatres in the north-east, particularly in Borno where a handful of attacks threaten the peace of the people and the northwest states of Katsina, Sokoto and Zamfara.

The Northern Patriots made this known in a detailed report on the security situation across the 19 states signed by its National Coordinator, Nuruddeen dodo and unveiled on Tuesday at a press conference in Abuja.

While admitting that a lot still needs to be done in Kaduna to fully comply with the directive of Mr President, the group noted that from its findings, the Nigerian Army has recorded tremendous feats in Niger, Kogi and Benue States.

“Since the President met with the Service Chiefs over the security situation in the country following a general outcry over the killings by bandits in the Northwest, the deployment of troop to areas of operations became upscale and sustained,” the report observed.

” The visits of the service chiefs to the Northwest generally boosted the morale of troop and beefed up their confidence. While the heat on the criminals was sustained through air and ground operations, many of the bandits fell and some fled in different directions.

“But the majority of them were either neutralised or arrested or made to flee to other neighbouring countries. The number of arrests was however quite impressive within a few days.

“The presence of the chief of Army Staff, Lt.Gen Tukur Yusuf Buratai, at the battlefield was also of great positive effects as it kept the troops pushing harder until they penetrated the fortresses of the insurgents and subdued them in their numbers.

There was also high professionalism by the military in carrying out combat operations that there were almost zero civilian casualties while treatment of captured criminals was according to the UN standards”.

The report further revealed that the sustained citizen’s collaborations between the military and civil police have yielded enormous results and needs to be sustained.

It added that political leaders are beginning to find their voices in condemning the criminals and asking them to surrender.

It, however, assured that the Nigerian Armed Forces have shown the capacity to defeat the insurgents and should be encouraged by both the authorities and citizens as the end of the terrorists is only a matter of time.