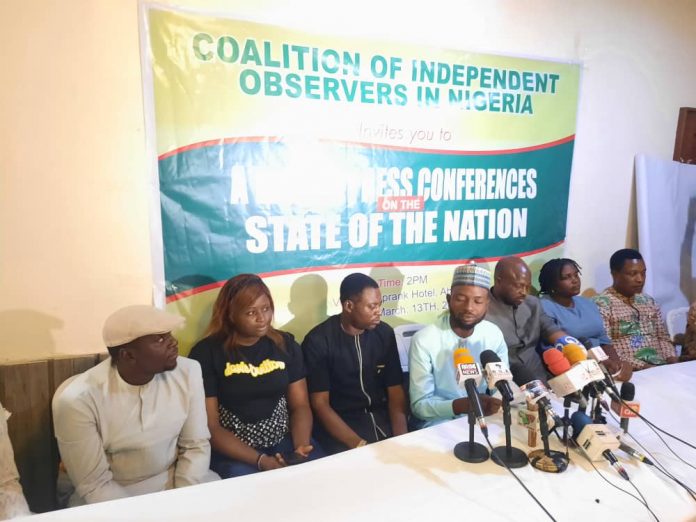 The Coalition of Independent Observers have cried out over plans by the ruling All Progressives Congress, APC to desecrate the electoral acts.

The group also scored the APC Leadership low over attempts to remove the party leadership through unconstitutional means.

Convener of situation room, Abdullahi Bilal who spoke with newsmen in Abuja said there is a need for a shift in attitude and response to what is happening in the APC.

He said this is the time to move from treating the party’s crisis as a spectator event as the consequences of what is going on in APC would impact all citizens.

He said when those behind these problems are done with the APC they would invariably turn on Nigeria.

He said elections, whether general or party primaries, are important processes that differentiate democracy from autocracy and dictatorships.

“The APC has been placed on this trajectory in recent months and we fear that if nothing is done to reverse the situation, it would not matter what the electorate decide to do during the 2023 General Elections, those eradicating internal democracy in the APC would come out to ensure that votes do not count.

“We had a taste of how these people behave going by the way they insist on holding the APC elective national convention without meeting statutory conditions stipulated in the Electoral Act and the party’s own constitution.

“At the forefront of this rampaging autocrats is the Kaduna State Governor, Nasir El-Rufai, who incidentally was at the forefront of the death of internal democracy that killed the PDP. We will not be surprised if the desperation with which he is pursing an autocratic installation of the next government is derived by his desire to return to power at the federal level in order to continue the implementation of anti-people policies that can only thrive in a stifled democracy” he said.

Bilal said the fears of Independent Monitors about the prospects of Nigeria defending into full blown dictatorship is coalescing into reality owing to a return to an era where coups are now considered fashionable.

“We are witnesses to how El-Rufai, acting with a handful of other unrepentant dictators, purportedly claimed to have removed the Chairman of the Caretaker Extraordinary Convention Planning Committee (CECPC), Yobe State Governor, Mai Mala Buni and replaced him with his Niger state counterpart, Abubakar Sani Bello.

“That illegal move was packaged to appear as having the endorsement of President Muhammadu Buhari, who is now to all intent an hostage at the hands of El-Rufai and his cabal. This aspect is one that Nigerians must immediately revolt against since they did not elect the Kaduna state governor as president.

“Gentlemen of the press, while it is worrisome that a cabal came out to claim it has removed Buni from office without recourse to the law and processes, what should put the fear of God into all of us is the fact that El-Rufai and his co-travelers have the audacity to insist that what they want is what must happen irrespective of its illegality.  It is their own way of reminding us that they have always lived above the law and they have no plan of ever being law abiding” he added

The Monitors commended  the Independent National Electoral Commission (INEC) which it said  has so far stood its ground and insisted that it will not recognize any leadership of the CECPC that did not emerge through recognized processes.

“It affirmed that it is only the signatures of Buni as CECPC chairman and Senator John Akpanudoedehe it will recognize for correspondences with the APC. It has also insisted on being given the statutory notices, especially the 21 day-notice of intent to hold a national convention, for it to be able to monitor the event in accordance with the law.

This singular act of patriotism by INEC has given a lifeline to democracy in Nigeria but the threat to our freedom of choice as a people has not disappeared but only hibernating as El-Rufai and his associates returned to the drawing board to design fresh evils against democracy in Nigeria.

“We have reliably learnt that those in INEC that did not allow the cabal to have its way “would be dealt with to teach a lesson”. They are planning to drop as many INEC Commissioners that sided with the law against illegality. Their resolve is to find trump up charges to use as basis to replace these commissioners. They are also planning to force a massive internal reshuffle on the Commission so that stooges that are loyal to them will take over Political Parties Monitoring. These are being planned so that future illegalities they have in mind can sail through unchallenged.

The Coalition of Independent Observers is therefore urging and appealing to Nigerians to rally behind INEC in show of support so that the cabal will not take away that Commission’s resolve to stand on the side of truth.

“Even as the moves continue to undermine INEC and by consequence the Electoral Act, we want to place on record our disappointment with President Buhari, especially in view of the tepid statement issued by his spokesperson, Garba Shehu, which failed to condemn the usurpation by El-Rufai and his group. We are also disappointed that the President joined the cabal in asserting that the leadership of the party and scheduling of convention date is not for party members to decide as this is the highest form of dictatorship. This arrogance may yet result in party members leaving the leaders to go vote at the polls so that we will see if they can have the number of votes that can only come from loyal party members.

“We are further disappointed that Mr. President  did not 7use the statement issued on his behalf to distance himself from the attempted coup that made Bello to be parading himself as CECPC chairman. This nonchalant response to the issue has emboldened the cabal to go for broke as they interpreted the President’s silence on the matter as an endorsement of their irresponsible behavior that now threatens democracy in Nigeria.

“It is disheartening that the statement sort of confirmed that a sitting president is directing his party to violate the law by insisting that the convention would go ahead on March 26 when INEC has made it clear that it had no notice to that effect.  This would be eroding confidence in INEC if the president can by fiat overrule the electoral body.

In our view, this intervention is pointless and should not have been made in the first place since it did not address the core issues of illegality and dictatorial behavior on the part of the members of the cabal.

“Gentlemen of the press, because there has been no consequences for the criminal acts that these members of the cabal have been engaged in, they have moved to implementing an even more dangerous phase of the their evil plot. They have concluded plans to backdate a letter purportedly written by the National Secretray to INEC sometimes ago in order to meet up with the provisions for the 21-day notice of intent to hold a national convention.

“INEC would then be coerced to into recognizing the forged letter and on the strength of that reverse its earlier stance that it has not been properly issued the statutory 21-day notice of intent to hold a national convention.  Certain staff of the Commission have been promised juicy postings for them to accept responsibility for not properly filing the letter when it purportedly arrived on time. It is on the strength of this ploy that the El-Rufai faction of the party is pushing ahead with the convention even though it has not met the conditions necessary to do so.

“In clear terms, a faction of the APC led by Nasir El-Rufai is about to commit forgery in addition to the serial violation of the Electoral Act that it has already committed.

“We are aware that they have also commissioned a media team to launch a campaign of calumny against INEC Chairman, Professor Mahmood Yakubu, as part of a plot to remove him from the position for daring to assert INEC’s independence with the manner he rejected the change in CECPC leadership.

“With the spillover to attempting to manipulate INEC, Nigerians must now wake up and realize that the rampaging cabal is no longer the problem of APC alone. It will undermine the 2023 General Elections unless it is quickly brought under control. We are in critical times.

“We therefore urge Nigerians to unite in resisting any attempt to make INEC act on a forged letter. We must also send a strong message that the INEC Chairman and Commissioners must not be victimized for doing the job they were appointed to do” he said