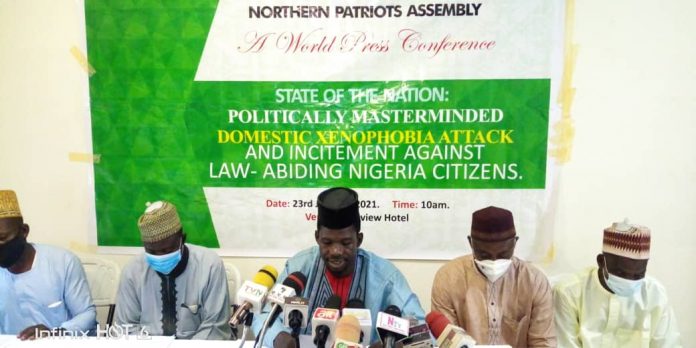 The National Coordinator of Northern Patriots Assembly has called out Asiwaju Bola Tinubu, the National leader of the All Progressives Party (APC) over the crisis between Yoruba youths and Fulani herdsmen in the Southwest.

Recall that Yoruba activist, Sunday Adeyemo Igboho, had issued a quit notice to the Hausa-Fulani in Igangan, Oke Ogun area of Oyo State.
The incident allegedly resulted in the destruction of houses and vehicles in the state.
Reacting, the Northern group in a statement signed by Alhaji Salihu Mohammed on Saturday in Abuja, accused Tinubu of being responsible for the crisis between Yoruba youths and Fulani herdsmen in the Southwest.
It also called on the Inspector General of Police to arrest Tinubu and all his cohorts involved in this sacrilegious act against the Constitution of the Federal Republic of Nigeria.
“All these threats, suspense and deliberate heating of the polity we believe are at the instigation of the so called South West political leader, Mr. Bola Ahmed Tinubu all in the name of politics,” the Northern Patriots Assembly’s statement read in part.
“We cannot but see the hands of the Tinubu in all these because of his inordinate ambition to become the president of Nigeria and his penchant for bellicosity anytime he is targeting a political prize horse.
“Tinubu as we all know is seriously eyeing the presidency come 2023. But as we inch closer to the election year, it is becoming glaring to him that the odds do not favour him.
“Instead of accepting his fate quietly as power does not come from man, Tinubu is trying upset the apple cart by heating up the polity and making the country ungovernable.
“This is with the hope that after he has turned the country upside down, that he will be called to the negotiating to state his demands where he will insist that the presidency be handed over to him or the mayhem continues
“This is self serving and unpatriotic act that should be condemned by all. A country cannot be set ablaze just for the ambition of one man no matter how stupendously rich he thinks he is.
“This is not the first time Tinubu would be involved in subversive activities against the Nigerian Stste due to his inordinate ambition.
“You will recall that he tried to betray Abiola by asking the military junta of Abacha to make him governor of Lagos State.
“It was when the latter refused that he intensified activities with NADECO and deceived many that he was fighting for democracy and joined in the call for sanctions against his own country.
“Till date, he is yet to clear himself of the certificate scandal that dogged his tenure as governor of Lagos State.
“In the build up to the 2015 elections, he did not mind the turmoil and acrimony that would have followed once his ambition is met but insisted he be made the running mate to Buhari for a Muslim-Muslim presidential ticket of the APC.
“Last year, the former Lagos State Governor was also fingered as one of the sponsors of the EndSars protests which almost destroyed Nigeria.
“Many online media reported at the heat of the protests that Bola Tinubu was sponsoring the #EndSARS protests in the South Western part of the country in order to cripple the country and disrepute the administration of President Muhammadu Buhari on the global front.

In“Though Tinubu issued a statement to deny sponsorship of the protests, his reasons were not convincing enough.
“We therefore call on the Inspector General of Police to arrest Tinubu and all his cohorts involved in this sacrilegious act against the Constitution of the Federal Republic of Nigeria.
“No one is in support of act of criminality by bandits, criminals and kidnappers anywhere in the country. But we will also not allow anyone no matter how highly placed to destabilize the nation through the back door.
“We are happy by the steps taken by the Oyo State governor to dissociate from this attempt at genocide.
“Other state governments in the Southwest must do the same and arrest Igboho if he comes into their territory.”