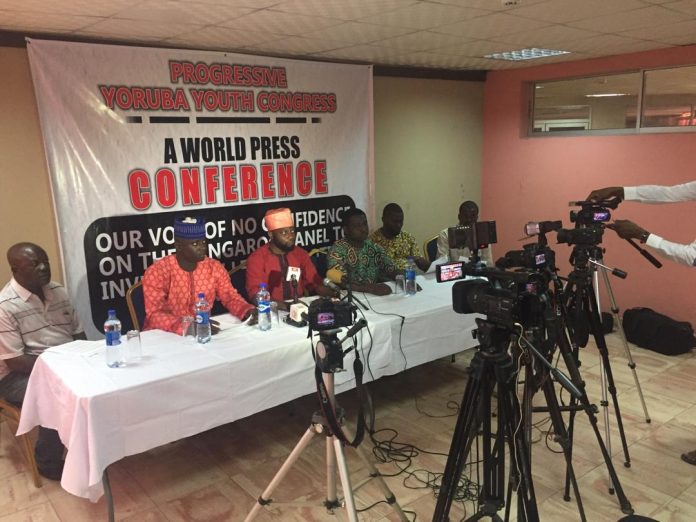 The Progressive Yoruba Youth (PYY) has passed a vote of no confidence in the Lagos State Judicial Panel of Inquiry and Restitution instituted by Governor Babajide Sanwo-Olu to investigate police brutality and high handedness.

According to the group, the panel has so far come short of high expectations of Lagosians, reduced to something of a “circus show”, especially as it concerns the Lekki toll gate incident.

Speaking at a press conference on Tuesday in Lagos, National President, Kola Salawu said members of the panel have been compromised, hence abandoned their duty for photo sessions.

He lamented that the state risks another outbreak of violence if the panel fails to get to the root of matters about human rights abuses.

The Yoruba youths said Governor Sanwo-Olu should shoulder the blame for commissioning the panel to arrive at conclusions that will make him re-electable in 2023.

The PYY noted that due to pressure from the governor, the panel may not arrive at a fair, objective and just conclusions on what transpired at Lekki.

To ensure transparency, the group, however, demanded that the panel be disbanded and the body of tainted evidence it has collected so far must be discountenanced.

It called on the judiciary and the Lagos State House of Assembly to jointly constitute a new panel.

We the Progressive Yoruba Youth find it expedient to urgently call the attention of Lagosians, Nigerians and the entire world to what is brewing in the state and the potential for this to cause intractable crises in the land. Our specific reference is to the Judicial Panel of Inquiry set up by the Lagos State Governor, Mr Babajide Sanw-Oolu to look into incidence of brutality and human rights abuses by operatives of the defunct Special Anti-Robbery Squad (SARS) of the Nigerian Police Force after weeks of #EndSARS protests that later turned violent.

Those who desire to succeed or make progress in life must perpetually be students of history. This is exactly the situation we find ourselves in Lagos State where we must learn from the immediate history of not just the state but that of the entire country. The unfolding situation with the Judicial Panel of Inquiry is such that there could be a miscarriage of justice if care is not taken, which is why we are raising the alarm now for citizens to do the needful.

It is pertinent to ask ourselves why the Judicial Panel of Inquiry set up by the Lagos State governor? Our recent history tells us that the panel is meant to investigate cases of police brutality and human rights abuses that led to #EndSARS Protests. Nigerians had taken to the streets to protest police brutality and abuse of human rights and demanded judicial panels to be set up. Because the Federal Government is not in a position to set up a judicial panel of inquiry it became the responsibility of the state. Consequently, the federal government encouraged states to set up judicial panels of inquiry.

The panel became all the more important following the Lekki Toll Gate incident, in which there were allegations that as many as 78 persons were killed when pandemonium broke out among protesters staking out at the Lekki Toll Plaza. Although, there was widespread condemnation of an alleged massacre of protesters by soldiers shown to be shooting into the sky in videos, by the following day there was no trace that such occurred. Protesters continued to insist that there was a massacre while security operatives that were present at the scene have a different account. No one has been able to show the corpses of the 78 persons allegedly killed.

With the Lagos State Governor setting up the panel, the people of the state had hope and expectations that things will move on smoothly and that the panel will be able to uncover the information necessary for the state and its citizens to get closure on what truly transpired at the Lekki Toll Gate and to also be able to hold indicted operatives of the defunct SARS to account.

What is, however, unfolding with the panel confounds us the same way it is confounding the citizens of Lagos state. We have seen the panel become more of a circus show, a member of the panel is running riot all over the public opinion space, making statements that are prejudicial to the eventual outcome of whatever work the panel does. As it stands today, the panel has fallen into the trap of a made-for-television reality show. The panel members are more interested in photo and camera ops that have only served to further inflame passion.

These theatrics of courting television prime time and exposure instead of doing the actual work it was set up has already damaged the reputation of the investigation. Such tendencies have sunken previous panels that would have exposed the misdeeds of police operatives and necessitate remedial actions, which would have prevented the meltdown the entire country was thrown into. Now we stand the risk of the substance being lost and then repeating the violent circle of protests against brutality.

Gentlemen of the press note that the inability of past panels of inquiry to get to the root of matters about human rights abuses brought us to the sorry state we find ourselves in today. The failure of previous panels of inquiry to conclusively address allegations of brutality and human rights abuses against the police was responsible for the lack of trust and confidence, which pushed Nigerians into staging protests that eventually led to the violence of the recent weeks. In a situation where the Lagos State Judicial Panel of Inquiry continues along the line of previous panels that failed, it means that we potentially risk another outbreak of violence. This time around the differences is that things will be more difficult to manage because the panel would have successfully further eroded public trust.

On the surface, the bungling by the panel may appear like something arising out of lack of experience, but we have made our findings to conclude that the panel is acting from a script, one written and clandestinely handed to it by Governor Sanwo-Olu when setting it up. The Panel, from the much we have seen, is set to arrive at conclusions that will make the Governor re-electable come 2023. This is a shame. We are talking about institutionalizing enduring change and a Judicial Panel that should maintain the impartiality of a law court has reduced itself to a tool for actualizing the next election.

We want to remind Nigerians that Governor Sanwo-Olu has already given his verdict on the Lekki Toll Plaza incident in several instances. The first time was when he visited the scene on the following day after the pandemonium and he ruled that no life was lost in the shooting.  He has also ruled as a medical doctor that the one fatality that resulted afterwards was from blunt force trauma and not gunshot. He has said that forces beyond the Lagos State Government were responsible for the incident. It has on several occasions made comments that were prejudicial to the ongoing work of the panel.

Secondly, Governor Sanwo-Olu is a person of interest in the Panel’s investigation because he is also an accused person. Several people are pointing accusing fingers at him for contriving the situations that led to the pandemonium and the consequent injury and reported deaths from the incident. His business and political associates are reported to have interests that resulted in the deployment of violence during protests so he should not be the judge in his case.

We have therefore lost confidence in the ability of the Lagos State Judicial Panel of Inquiry to arrive at a fair, objective and just conclusions since its members are automatically under pressure to align with the governor’s views and stance on what transpired at Lekki Toll Plaza.

We consequently demand that the Lagos State Judicial Panel of Inquiry, as constituted and inaugurated by Lagos State Governor, Mr. Babajide Sanwo-Olu, should be immediately disbanded and the body of tainted evidence it has collected so far must be discountenanced. Its members should be barred from being part of any investigation that is connected to the Police brutality, #EndSARS protests or the Lekki Toll Gate incident.

We insist that a new panel should be constituted. Its membership should be jointly decided by the Judiciary and the Lagos State House of Assembly since the executive arm is an interested party. The panel to be constituted should be barred from leaking information to the media or talking to the press while its activities are opened to coverage and livestreaming to ensure transparency.

We thank you for listening.