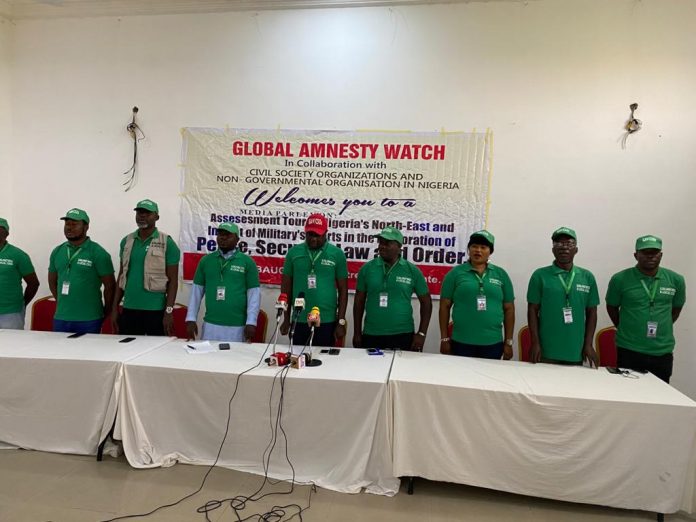 The UK Chapter of the Nigerians in Diaspora Monitoring Group (NDMG) has applauded President Muhammadu Buhari and the Service Chiefs for improving the security situation in the country.

Describing the progress made as “giant strides”, the group said its feedback mechanism back home rates the current administration high in the war against terrorism, bandits and other criminal gangs.

In a statement signed by its Director of Communications, Dr. Kalisha Amos, on Friday, the Nigerians in Diaspora revealed that the exploits of the troops is already gaining the attention of the international community.

It noted that those naysayers who criticize and castigate the processes and arrangements that were ingeniously put in place by the government have been forced to swallow humble pie.

“The NDMG, UK Chapter having followed events in Nigeria with regards to the efforts of the government in addressing the various security challenges in the country, wishes to use this medium to applaud the Commander-in-Chief of the Armed Forces of Nigeria, President Muhammadu Buhari for the giant strides recorded in the improvement of security in Nigeria,” the statement reads in part.

“The feedback mechanism we have in place to continually monitor events in the country has been positive so far. It is on the heels of this that we are applauding the efforts of the president as well as the Service Chiefs in ensuring that the threats posed by non-state actors are effectively neutralized.

” The Nigerians in Diaspora Group wishes to extend its profound appreciation to Mr President. His leadership strides indeed enabled the Nigerian Military to do exploit in the area of addressing the various security concerns in the country.

“It is instructive to state that these  individuals and groups whose stock in trade is to criticise the government have suddenly lost their voices now that the results are positive. They have been silent in the wake of how Operation Sahel Sanity has been able to restore normalcy in North West, they have also been silent on how the Boko Haram group have been incapacitated in almost all the states in North-East Nigeria.

“The Nigerians in Diaspora views these achievements as worthy and exemplary and an indication that within a short period, Nigeria would indeed experience the sustainable peace and development that it deserves.”

While commending the Chief of Army Staff, Lt. Gen. Tukur Buratai for leading the troops in an impressive manner, the Nigerians in Diaspora, however, charged the COAS not to rest on his oars.

It further urged the Army Chief to sustain the various innovations introduced so as not to allow those against the interest of the country to polarize the country in fulfilment of their nefarious agenda.