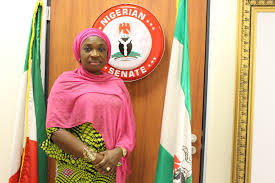 The Network of Friends and Supporters of Buhari (NFSB) has saluted the lawmaker representing Anambra Central in the National Assembly, Uche Ekwunife, for putting aside politics to show solidarity with the military in the war against insurgency.

In a statement signed by Publicity Secretary, Comrade Silas Giwa, on Wednesday, the pro-Buhari group challenged legislators in the ruling party to follow her “sterling example”.

Despite being a member of the opposition Peoples Democratic Party (PDP), Senator Ekwunife rated the military highly in their fight against Boko Haram/ ISWAP terrorists in the northeast, calling on Nigerians to render maximum support in their final clearance operation.

“Our military has so far been performing well and securing numerous victories against the insurgents within the limits of the resources at their disposal,” she said. “They have been neutralising and containing many fronts.”

Commending the Senator, the Network of Friends and Supporters of Buhari said it is unfortunate that APC lawamkers have instead resorted to distracting and castigating the military at the slightest instance.

According to the group, Ekwunife chose the ” right course of action by supporting the military and imploring ways and strategies to savage the situation”, adding that her

“position on the solution to the insurgency is profound and reassuring considering that she is a member of the opposition”.

The NFSB, however, advised other lawmakers that have gone rogue and switched allegiance to terrorists instead of pursuing the good of the country at all times in line with the oath they swore to change.

The group also called on state governors from the northeast, relevant stakeholders and Nigerians to join hands with President Buhari and the service chiefs to put a final end to Boko Haram.

The Network of Friends and Supporters of Buhari is elated to note that there are still Nigerians in position of authority that are capable of evaluating national issues from broad perspectives as recently demonstrated by Uche Ekwunife (People’s Democratic Party, PDP, Anambra Central), who discarded narrow interests to acknowledge that the Armed Forces of Nigeria are doing a good job with fighting terrorism.

We acknowledge Senator Ekwunife for her forthrightness in the interview she granted to a national newspaper in which she commended the Nigerian Army for the excellent job it has done in fighting the enemies of Nigeria even though she also pointed out the shortcomings that could be improved upon by that institution.

Our position is informed by the unwholesome activities of some lawmakers, many of them from the ruling party, who have turned their presence in the National Assembly into opportunity for distracting and castigating the military in order to get at President Muhammadu Buhari. It is most of unfortunate that these critics are the ones that have been caught harbouring Boko Haram operatives, financing terrorists or stealing from the money earmarked for combating the insurgency.

For us, what the Senator did is true activism and a sterling example of how to represent a constituency. The eloquence she blended with logic and facts in the interview is a model that we highly recommend for other federal lawmakers that have gone rogue and switch allegiance to terrorists instead of pursuing the good of the Federal Republic of Nigeria at all times in line with the oath they swore.

Her position on the solution to the insurgency is profound and reassuring considering that she is a member of the opposition. She has shown a  hich is something that some lawmakers in Mr. President’s own party have shown they are incapable of.

We advise members of the National Assembly, particularly those that are in the habit of sponsoring questionable motions, to a cue from Senator Ekwunife and learn what true nationalism is. Where they had sown division, she blazed the trail of bipartisanship that is devoid of ethnic and sectarian posturing.

We urge Nigerians including her colleagues in the National Assembly to support Mr. President win the war on insurgency, which is ordinarily what all Nigerians would be expect members of the All progressives Congress (APC).

We had for long been forlorn that members of parliament refused to complement Mr. President’s anti-terrorism efforts while rather embarking on clandestine meetings to frustrate the efforts of the Service and Security Chiefs. But Senator Ekwunife has shown us the flicker of hope that has revived in us the possibility that the Commander-in-Chief may yet enjoy the needed legislative support if lawmakers like Senator Ekwunife can penetrate the hard heartedness that lack of patriotism has sown in some of her colleagues.

The realization that all Nigerians must be involved in the war against terrorism, coming from Senator Ekwunife, an opposition Senator, shows that Nigeria still have people with conscience. We call on the Senate, the House of Representatives and state Governors from the northeast to join hands with President Buhari and the service chiefs to put a final end to Boko Haram’s insurgency and banditry in Nigeria.

As we salute the courage of Senator Ekwunife for daring to say the truth at a time when many are jumping on the bandwagon of uninformed criticism, we are paying Oliver Twist by appealing to her to organize focal group discussions with her colleagues so that she can enlighten them on how to set aside narrow interests to embrace what serves the collective good of Nigerians.