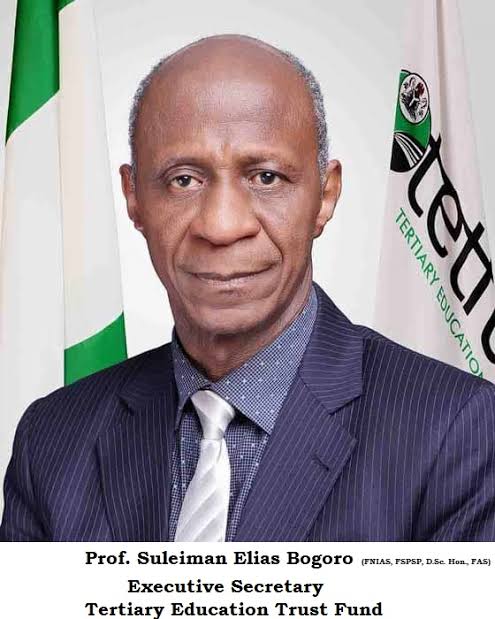 The CSOs was led by Advocates of Social Justice for All (ASJA), Coalition for Transparency and Accountability (CTA) and Equity Initiative among others.

The group undertook a survey of the activities of TETFUND under the leadership of Prof. Bogoro, consulting relevant stakeholders in the critical tertiary education sector.

In its report signed by National President, Comrade Joseph Guona, the Coalition revealed that the call was from disgruntled sources, unhappy with some of the new initiatives introduced by the executive secretary upon assumption of office in 2019.

The committee also revealed that some vice-chancellors of some universities are not pleased with the monitoring team deployed by TETFUND to all project sites across the country.

Bogoro’s insistence on due process, accountability, and transparency in the conduct of government business also hasn’t quite gone well among the tertiary institutions top shots.

The Coalition, therefore, described the report as “blackmail” and “distraction tool employed by some disgruntled vice-chancellors and contractors who have made several attempts at compromising Professor Bogoro”.

There was a recent call by some civil society organizations for a probe of the activities of TETFUND under the leadership of Professor Suleiman Bogoro. Consequently, a coalition of Civil Society Organizations devoted to the entrenchment of transparency and accountability by public office holders undertook an investigative study to look at the allegations leveled against Professor Suleiman Bogoro to put issues in a proper perspective for the relevant stakeholders as well as the members of the general public.

The Coalition undertook a survey of the activities of TETFUND under the leadership of Professor Suleiman Bogoro by consulting relevant stakeholders in the critical tertiary education sector. This consisted of site visits to select tertiary institutions where it was indicated TETFUND made interventions.

The various projects initiated by TETFUND were scrutinized based on quality, cost, and deliverables. The committee also interviewed TETFUND contractors to understand the contract award process in effect in TETFUND, as well as the various milestones for payments.

It also interacted and scrutinized the procurement process in place in the agency with regards to adherence to due process and other ethical stipulations. The committee looked at the welfare of staffers of the agency.

In the course of the investigations by the coalition of CSOs, it was discovered that the genesis of the call was from disgruntled sources, mainly those who are not happy with some of the new initiatives introduced by the executive secretary upon assumption of office in 2019.

The committee also discovered that the procurement process in the agency is subject to multi-layers of scrutiny before awards letters are issued, as against the norm where contractors besiege the agency’s headquarters with referral letters and business cards of the high and mighty in the country.

The committee discovered that vice-chancellors of some universities are not happy with the monitoring team deployed by TETFUND to all project sites across the country. Their grouse is that Professor Suleiman Bogoro has disregarded their inputs in the way and manner projects should be executed in their various schools.

It was also discovered that some of the vice-chancellors who are used to nominating contractors that would execute TETFUND projects in their schools under the previous administration are not happy that the system introduced by Professor Bogoro had taken such privileges away from them.

Staffers of the agency explained that there was a menace of poorly executed TETFUND projects across the country because some of the contractors nominated by the vice-chancellors do not have the required competence and in most instances, they cut corners at the end of the day. The resultant effect is poor jobs, which defeats the aim of the interventions by TETFUND.

It was also discovered that Professor Suleiman Bogoro seems unpopular in some quarters in TEFUND because of his insistence on due process, accountability, and transparency in the conduct of government business.

It was discovered that the recall of Professor Suleiman Bogoro as Executive Secretary of TETFUND was as a result of the rot in the system and the need to sanitize the agency. The honorable minister of education was said to have scrutinized the records of past executive secretaries and found Professor Suleiman Bogoro’s short-lived tenure as one of the most transparent in the annals of the agency. This consequently accounts for his recall and with a mandate to sanitize the agency for optimal productivity.

The highlight of the findings indicated that the bold step taken by Professor Suleiman Bogoro to retrieve over N10 billion from non-performing institutions in recent times was the final straw that ignited the campaign of slander against him through the sponsorship of malicious publications in the public space as well as the enlistment of shadowy civil society organizations with no track record to attempt to blackmail Professor Suleiman Bogoro into submission.

The Coalition of Civil Society Organizations sees the call as a distraction tool employed by some disgruntled vice-chancellors and contractors who have made several attempts at compromising Professor Suleiman Bogoro to no avail.

The call for investigations is part of the larger blackmail plot orchestrated to mislead the relevant authorities as well as the members of the unsuspecting general public. The request is lacking in merit as there is no iota of truth in the allegations bandied in the public space.

The Coalition of Civil Society Organizations wishes to inform members of the general public that the call for the probe of Professor Suleiman Bogoro is laced with malice and of poor taste. It consequently behooves on all well-meaning Nigerians to see through the mischief and ignore it in its entirety.