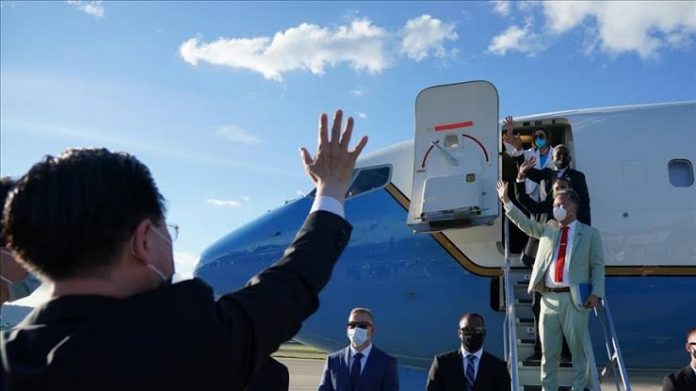 In response to U.S. House of Representatives Speaker Nancy Pelosi’s visit to China’s Taiwan region, an egregious act of provocation against China, China decided to adopt sanctions on Pelosi and her immediate family members and take eight countermeasures against the U.S., China’s Ministry of Foreign Affairs announced on Aug. 5.

Meanwhile, in order to sternly deter the U.S. and Taiwan from continuing to make negative moves to further their collusion, the Chinese People’s Liberation Army (PLA) has conducted live-fire joint combat exercises and training on an unprecedented scale in the waters and airspace off the Taiwan Island over the past few days.

These powerful actions have fully demonstrated that China has the determination, means, and capability to safeguard its national unity, national sovereignty, and territorial integrity.

The effective countermeasures taken by the Chinese government and the PLA’s proven ability to launch precision strikes and perform area-denial tasks have helped external forces attempting to interfere in China’s internal affairs and the “Taiwan independence” separatist forces better understand what did China mean by “The will of the people cannot be defied and those who play with fire will perish by it,” “Let’s see what happens if she actually goes,” and “What needs to be done will be done”.

Attempting to use Taiwan to contain China, the U.S. made a malicious provocation first, and China has been compelled to act in self-defense. No one is qualified to make irresponsible remarks on China’s countermeasures.

During the past few days, people from all walks of life in Taiwan have staged protests against Pelosi’s visit to the island. They exposed Pelosi’s despicable trick to stir up tensions across the Taiwan Strait, fool the people in Taiwan and bring scourge to the island for her own political gains, and denounced the Democratic Progressive Party (DPP) authorities’ colluding with external forces, deliberately escalating cross-Strait confrontation, and constantly making provocations in pursuit of “Taiwan independence”.

Widely circulated remarks by protesters in Taiwan include “Pelosi has brought a time bomb to Taiwan” and “People in Taiwan cannot allow politicians to make a mess in Taiwan without cleaning it up”.

Such voices have reflected the shared opinions of people in Taiwan who reject manipulation by external forces and refuse to be held hostage by the DPP authorities.

China must be and will surely be reunified, which will not change regardless of the will of some die-hard anti-China forces from the U.S. side or the illusion of separatist forces seeking “Taiwan independence.”

Pelosi’s visit to Taiwan constituted a gross violation of the one-China principle and a malicious infringement of China’s national sovereignty. It has not only triggered strong indignation among the Chinese people, but aroused widespread opposition from the international community.

So far, more than 160 countries have spoken up for justice, reiterating their commitment to the one-China principle and support for China’s efforts to safeguard national sovereignty and territorial integrity, while pointing out that the provocative visit made by the U.S. side was a breach of its commitment to China and a violation of the basic norms governing international relations.

“Our position is very clear. We abide by General Assembly resolutions, by the one-China policy, and that is the orientation that we have in everything we do,” said Guterres.

The international community has seen clearly that by taking resolute countermeasures in response to the U.S.’ provocative acts of interfering in China’s internal affairs and undermining China’s national sovereignty, China is fighting against hegemonism, interference, and secession, and is taking justifiable actions to defend the purposes of the UN Charter and the basic norms governing international relations.

Attempting to build small circles to confuse right with wrong and challenge international law and justice, the U.S. stands in opposition not only to the 1.4 billion Chinese people, but also the overwhelming majority of countries in the world and all the peace-loving people in the world.

Pelosi’s visit to Taiwan has made it clearer that the root causes of the tensions across the Taiwan Strait, the serious difficulties confronting China-U.S. relations, as well as the major risks to the Asia-Pacific security all lie in the U.S.

Over the past few days, people from all walks of life in the Asia-Pacific region as well as farsighted people in the U.S. have pointed out that Pelosi’s visit to Taiwan would only undermine regional peace and stability and make the already turbulent international situation more volatile.

Former U.S. Ambassador to China Max Baucus called Pelosi’s visit to Taiwan a “provocation”. “We are playing with fire when we get pretty close to the line, and Pelosi is pushing us much, much closer to recognizing Taiwan as an independent country. And once we get there, we’re going to pay a price,” Baucus said.

The lukewarm welcome Pelosi got in South Korea has attracted wide attention and sparked extensive discussions.

It’s widely believed that Pelosi’s misdeeds in destabilizing regional situation have turned herself into a veritable hot potato.

The attitudes of countries in the Asia-Pacific region have fully proven that the U.S.’ attempt to add the Taiwan question to its regional strategy to escalate tensions and provoke confrontation goes against the trend of development of the region and runs counter to the expectations of people in the region.

The complete reunification of China is an aspiration shared by people on both sides of the Taiwan Strait.

China will strive for the prospect of peaceful reunification with the utmost sincerity and efforts, but if external forces and the “Taiwan independence” separatist forces continue to provoke it, force its hand or even cross the red line, it will be compelled to take resolute measures.

When it comes to the great cause of national unification, the Chinese people have the gut not to be misled by fallacies or scared by evils, the ambition to never be intimidated or crushed, the determination to unite as one, and the ability to resolutely safeguard national sovereignty and national dignity.

Any person, any force, and any country that attempt to slow down China’s development and obstruct the great rejuvenation of the Chinese nation by provoking China and stirring up trouble for China on the Taiwan question will find their efforts completely futile and end up getting themselves badly hurt.

(Zhong Sheng is a pen name often used by People’s Daily to express its views on foreign policy and international affairs.)