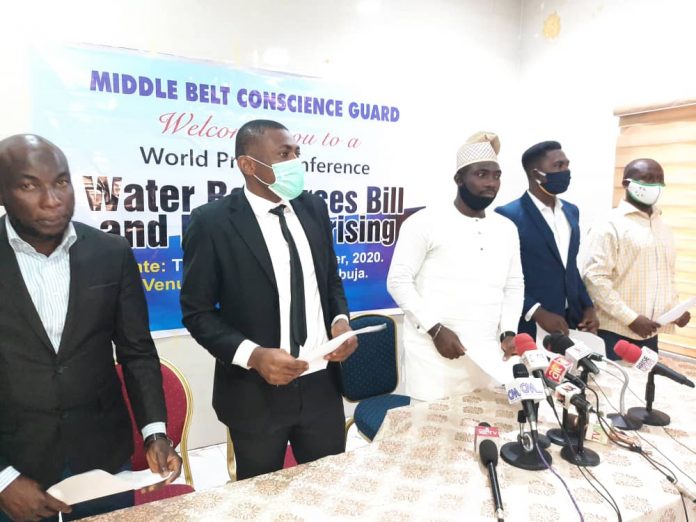 Governor Samuel Ortom of Benue State has been accused of plots to monopolize cattle rearing business in the Middle-Belt.

The Middle Belt Conscience Guard (MBCG), which made this known at a press conference on Tuesday in Abuja, also warned the governor not to set the region on fire with his “inflammatory rhetorics” against the National Water Resources Bill.

Speaking on behalf of the group, National President, Prince Enero said Mr Ortom’s ancestry and connection to Fulani (grandfather) makes cattle rearing a part of him.

According to Enero, the governor perceives the Fulanis as a threat to his seemingly booming cattle business which he hopes to expand further when he leaves office in 2023.

The bill initiated in 2019, among other things, seek to establish a regulatory framework for the water resources sector, provide for the equitable and sustainable development management, use and conserve Nigeria’s surface water, groundwater resources and related matters.

Governor Ortom, who has persistently voiced his displeasure, said the bill is anti-federalism aimed to grab lands for pastoralists.

However, MBCG said the governor’s criticism without reaching out to the NASS is a strategic way of priming Benue people to embrace violence if the legislation is eventually passed.

“But because Ortom scarcely has any track record of cordial relations with anyone, he is not able to wield such influence hence the resort to inflammatory rhetoric without a thought for how this affects the long-term peace and stability of the Middle Belt, including Benue state.

“Even if the National Assembly were to go ahead and pass the bill against all protestations, there is room to lobby and mount pressure against Mr. President assenting to the document; which must be done responsibly and not the current loutish approach that we have so far seen from the Benue state governor. It is an exercise that is guaranteed to succeed if Ortom can redeem himself on time to appear responsible before his fellow governors to garner support for such enterprise.

“In the most extreme case, the judiciary is there as the last hope of all citizens and Governor Ortom is welcome to approach the law courts to stop the National Water Resources Bill if the amendment passed through and not resort to whipping up sentiment and inciting people to violence.

“We are doubtful that Governor Samuel Ortom will avail himself of these legitimate channels of dissention because he is resolved on setting everyone up against peace in the middle belt. Groups that he is sponsoring are coming out to echo his prelude to violence, which makes it necessary for us to tell him to stop sponsoring mushroom groups to attack the Federal Government as led by President Muhammadu Buhari. The President is not contesting any election with Ortom, all President Buhari wants is to create an enabling environment for peace, unity, development and progress and equality for all citizens”.

The group, therefore, challenged the governor to prove that his “belligerent stance is not because he sees himself as being in competition with pastoralist Fulani in cattle rearing”.

It added that Mr Ortom is “typical Tiv – Fulani because his grand grandfather was Fulani and has large heard of cattle on his farm, hence wants to monopolize the cattle business when he leaves Government House Makurdi in Year 2023”.

The Middle Belt Conscience Guard, however, cautioned the Benue governor that he would be held responsible for any further degeneration of the security situation in the area on account of his incitement of the people to violence.