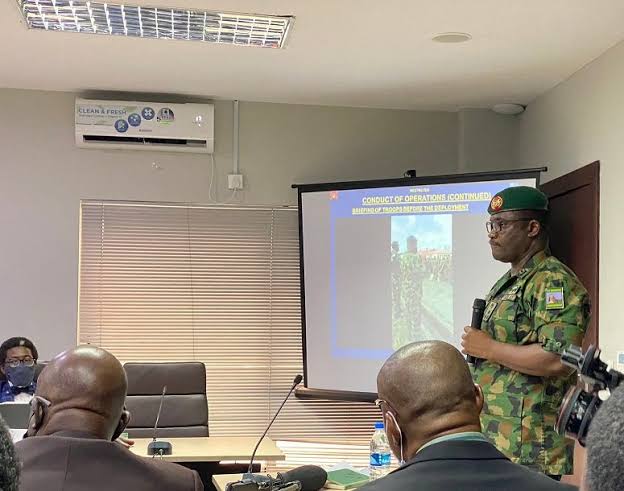 The Coalition of Oduduwa Decedents has lauded the testimony of the Nigerian Army at the resumed hearing of the Lagos Judicial Panel of Inquiry and Restitution which held recently in Lagos state.

According to a statement by the group, the testimony of the Nigerian Army is an indication that the Nigerian Army has nothing to hide with regards to its intervention in the EndSARS protest that recently rocked the country.

“ It is indeed a statement of the fact that the Nigerian Army intervened in the EndSARS protest on the invitation of the Lagos state government which is contrary to the narrative been pushed forward by some segment of the populace. This much was highlighted in the testimony given by representatives of the Nigerian Army that appeared before the panel. We find this disposition commendable, which by and large indicates the tremendous respect the Nigerian Army authorities, has for the rule of law in the country.”

The group further added that the way and manner the Nigerian Army presented their case indicates its readiness to defend its actions and inactions at all times.

“The Nigerian Army has indeed won the confidence of the Coalition of Oduduwa Descendants by setting the records straight with regards to what transpired at the Lekki Tollgate where it was alleged that soldiers killed unarmed and peaceful protesters.”

“ The Nigerian Army indeed clarified its intervention and with facts to buttress their point in a detailed fashion that indeed punctured the erroneous and highly misleading stories that made the round that live bullets were fired into the crowd of peaceful protesters.”

The Coalition of Oduduwa Descendants stated that the Nigerian Army acted in the best interest of the country by averting what would have been a crisis of phenomenal proportion with the hijack of the protest by some thugs and hoodlums.

“It remains the fact that hoodlums and thugs had hijacked the protest and were on the verge of unleashing violence but for the intervention of soldiers that fired blank bullets into the air in an attempt to dismiss the already restive and volatile crowd.”

“It is thus our considered opinion that the intervention of the soldiers indeed saved the day. This is, however, contrary to the narrative promoted in some quarters where it was alleged that soldiers massacred youths at the Lekki Tollgate.”

“There is a great need for Nigerians to tow the path of caution when it comes to issues of national security as there are more than meets the eyes and with the level of professionalism that has been entrenched in the operations of the Nigerian Army in the last few years, it would be foolhardy for soldiers to fire live bullets into a crowd of peaceful protesters and in the full glare of the public.”

The Coalition of Oduduwa Descendants berated the promoters of fake news in the country for the ignoble role played in misinforming the public with regards to what transpired at the Lekki Tollgate.

“This is the era of fake news, and we must admit that those promoters of fake news are responsible for the disjointed and incoherent statements issued with regards to what transpired at the Lekki Tollgate. We are convinced that it was indeed deliberate and meant to blow things out of proportion and present the Nigerian Army in a bad light.”

“The recent revelations have vindicated the Nigerian Army, and it is hoped that the Judicial Panel of Inquiry and Restitution would do all within its mandate to serve justice to all found culpable in the escalation of violence in Lagos state.”

“The Nigerian Army has by all indications remained the nation’s saving grace as exemplified in the restoration of law and order in Lagos state and other parts of the country. This much the Coalition of Oduduwa Descendants acknowledges and commends. It is also hoped that the testimony of the Nigerian Army would indeed put to rest the speculations that soldiers at the Lekki Tollgate committed a massacre.”

It would be recalled that there had been widespread criticism of the Nigerian Army for its intervention in the restoration of law and order during the EndSARS protest in the country.