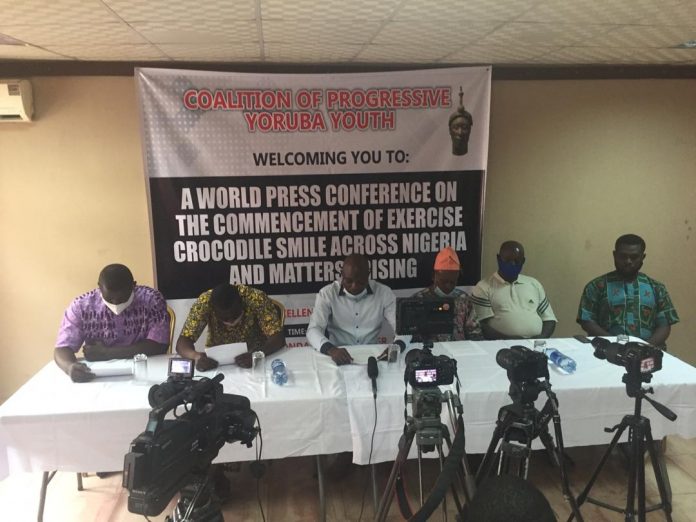 The Coalition of Progressive Yoruba Youths (CYYY) has welcomed the commencement of the Nigerian Army’s annual exercise, ‘Crocodile Smile’.

According to the Yoruba youths, the operation which commenced in 2016 has been a tremendous success, curbing crime and criminal activities and will continue that trend this year.

Comrade Kola Salau, speaking on behalf of the group at a press conference on Monday in Lagos noted that the addition of cyberwar makes this year’s edition unique.

Salau said that this would help identify, track and counter negative propaganda in the social media and across the cyberspace.

Recalling previous editions, Salau noted that “the military made significant strides as it raided suspected criminal hideouts in the creeks around Ajaosolo, Okogho, Opumani, and Obodo general area and in the process, intercepted suspected illegal oil bunkers and several items.

“It was the success of the first exercise that necessitated the launch of Exercise Crocodile Smile II on Takwa Bay Island in Lagos and the sequels because it pushed some criminal elements fleeing from the Niger Delta to other parts of the country”.

Salau added that ” those of us from the Southwest are particularly concerned because of the enormous human and material resources in the region”.

He, however, assured that the exercise has nothing to do with the ongoing protests in the country.

The Yoruba youths advised innocent and law-abiding Nigerians that they have nothing to fear as the army have earned a reputation as a highly professional and disciplined institution.

It is instructive that we address you on a matter of urgent national importance given what the nation is going through at the moment.

You will agree with us that after the Nigerian military made significant progress in quelling terrorism and banditry in parts of the country, that it is likely that some of the criminal elements may have escaped into the hinterland to continue their heinous acts.

Recent events leading to thdisbandmentnt of the Special Anti Robbery Squad, SARS, of the Nigeria Police Force, has also given citizens concerns about the internal security situation in Nigeria and the police and other security agencies forced out of the streets, concerned Nigerians have expressed fears that crime and criminal activities may escalate in the country and have stressed the fact that the lives of our people, property and investments must be protected by the government.

As we all know, the government of President Muhammadu Buhari has never shied away from performing its primary responsibility, which is the protection of lives and property as it has technically defeated terrorism and cracked down on banditry and other forms of crime.

It is in that bid that we welcome the recent announcement by the Nigerian Army, that it is set to continue its annual exercise CROCODILE SMILE on Tuesday.

Since the launch of the exercise in 2016 in the Niger Delta region, the Operation CROCODILE SMILE has been a huge success in curbing crime and criminal activities that its area of coverage was widened and relaunched annually in five different phases.

The launch of the exercise this year would be the sixth in the series of sequels launched to combat crime.

The only addition to the exercise which will make Operation CROCODILE SMILES VI unique in operation is that it will be enabled to identify, track and counter negative propaganda in the social media and across the cyberspace.

This means that it will be an all-encompassing exercise which in addition to tracking cyber warfare exercises will also include identifying Boko Haram terrorists fleeing from the Northeast and other parts of the country for the sustenance of peace and security in Nigeria.

Innocent and law-abiding Nigerians have nothing to fear about the exercise as the Nigerian Army has earned a reputation for itself as a highly professional and disciplined institution.

This is encapsulated in the fact that for the over five years of Operation CROCODILE SMILE in various parts of the country,  troops have not lost focus on what is expected of them but have abided by the rules of engagement in carrying out their tasks of flushing out criminal elements.

On the other hand, those that have every reason to fear are the criminal’s elements in the country who are making life miserable for millions of citizens through acts like kidnapping, extortion, fraud, armed robbery, oil theft and cybercrime.

Nigerians must ignore the cynicism and attempt to paint the current exercise in a bad light as this is not the first time that agents of anarchy have tried to do so but failed.

When the Nigerian Army launched the first exercise in the Niger Delta region which was aimed at restoring normalcy to the area and to provide adequate security for residents and the national assets situated there, it was called names and there were allegations that the exercise was an attempt at genocide by the Nigerian government on the people of the region.

It was not long before they confirmed it was to check criminal activities like kidnapping, militancy, piracy and other forms of criminal activities in support of the civil authority and to keep Nigeria and its economy safe and going without interruption.

Despite the cynicism,  the military made significant strides with the exercise as it raided suspected criminal hideouts in the creeks around Ajaosolo, Okogho, Opumani, and Obodo general area and in the process, intercepted suspected illegal oil bunkers and several items.

It was the success of the first exercise that necessitated the launch of Exercise Crocodile Smile II on Takwa Bay Island in Lagos and the sequels because it pushed some criminal elements fleeing from the Niger Delta to other parts of the country.

Those of us from the Southwest are particularly concerned because of the enormous human and material resources in the region.

The region arguably has the highest concentration of talents and entrepreneurial concerns as well as Small and Medium Scale Enterprises which complements the government’s efforts in providing jobs to our teeming populace.

The large number of international markets coupled with public and private assets are also avenues for economic growth.

We, therefore, welcome the steps the government is trying to take to protect lives and property and commend the Nigerian Army for coming up with the initiative.