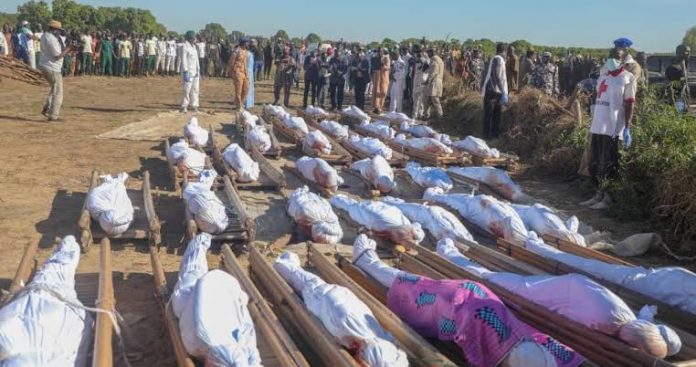 The North East Patriots Forum (NEPF) says there is a political undertone in the killing of farmers at Zarbamari community in Jere Local Government Area of Borno State.

Contrary to reports, the group said the dastardly act may not have been committed by Boko Haram terrorists, rather aggrieved opposition politicians in Borno.

The forum, which made this known at a press conference on Monday, said the killings could be linked to the first local government elections in the state after 13 years.

Speaking on behalf of the group, Secretary-General, Alhaji Isah Bulama, said opposition members on sensing imminent defeat at the polls, resorted to unorthodox means to scuttle the exercise.

While condemning the barbaric act, the North-East forum called on relevant security authorities to swiftly unravel those behind it.

It, however, handed a 14-day ultimatum to security operatives to arrest the killers and bring them to justice.

The leadership of the North East Patriots Forum welcomes all stakeholders to the important press conference in the light of the dastardly act of violence carried out on farmers in Zarbamari village in Jere Local Government Area of Borno State.

We condemn such barbaric act in its entirety and wish to extend our condolences to the people of Jere Local Government Area and Borno State at large. We must admit that these are indeed trying times in the North East region of the country especially with the threats posed by the Boko Haram terrorist group that has seen to the death of thousands as well as the displacement of millions of people in the North East region.

The North East Patriots Forum is desirous that the perpetrators of this dastardly act are brought the face the full wrath of the law within the shortest possible time.

We are indeed shocked with the way and manner young and agile men were slaughtered by the supposed Boko Haram members while tiling their farmland in Zarbamari community which has been hitherto one of the most peaceful local government areas since the beginning of the Boko Haram insurgency in Borno State.

It is also very shocking that Jere Local Government has never been in the news due to the activities of the Boko Haram terrorist group and for this dastardly act to be committed leaves `more to the imagination.

The way and manner these farmers were killed are also suspect in the sense that since the beginning of the Boko Haram insurgency in North-East Nigeria, the group has not been known for slitting throats and beheading farmers as evident in Zarbamari recently.

We are also constrained to ask some critical questions with regards to the killings in Zarbamari because as critical stakeholders, we are not aware of farming activities in Zarbamari in this time of the year and rice cultivation as such. We are also constrained to ask why such a large number of people would elect to gather at a location without any form of protection either at the community level or from the security agencies.

All of these questions require answers if Nigerians indeed want to know the truth about what transpired at Zarbamari village in Jere Local Government Area. As concerned stakeholders in the region, we can say to a large extent that we understand the dynamics of Borno State and Jere Local Government Area to be precise. It is consequently hard to believe that indeed the killings were perpetrated by the Boko Haram terrorist group.

We have our reservations and which is heightened by the fact that the killings coincided with the recently conducted local government elections in Borno State after 13 years. We are also constrained to want to believe that the killings in Zarbamari have political undertones with the way and manner the victims were executed, which by all indication was to send a strong message to an individual or a group.

Nigerians must indeed be aware that Zarbamari community in Jere Local Government Area is not one that has experienced much of Boko Haram attacks since the beginning of the insurgency. It, therefore, beats our imaginations as to why such would happen when the Boko Haram group has been decimated. Their activities confined to the fringes of the Lake Chad Basin region, which is hundreds of miles from Jere Local Government Area.

The North East Patriots Forum believes that the killings in Zarbamari community are nothing but a political event that is aimed towards scuttling the conduct of local government elections in the state. And the perpetrators are most likely the members of the opposition that apparently do not stand a chance at the polls in the local government area and hence they must do all within their means including unorthodox means to scuttle the peace and tranquillity in Borno State.

The North East Patriots Forum is also aware that the real intention behind the killing of the farmers in Zarbamari is for political expediencies and not an attack by the Boko Haram terrorist group as widely alleged.

We are using this medium to call on the relevant security agencies to as a matter of urgency unravel those behind the dastardly act that was committed in Zarbamari. We are also giving the various security agencies a 14 days ultimatum to arrest the killers of these innocent people and bring them to justice.

We must also expressly state that human life is dignifying. As such, no individual or group should denigrate human life for political considerations as in the case with the killings in Zarbamari.

It is our firm stance that nobody should take Nigeria and Nigerians for granted or play politics with the blood of innocent citizens. This is indeed despicable and must be condemned by all and sundry.

The North East Patriots Forum is indeed watching events as they unfold in Borno State with regards to the local government elections and states that should there be further escalation of violence, the blame should go to members of the opposition in the state which by all intents and purposes are not happy with the Governor of Borno State, Babagana Zulum for having the boldness to conduct LG elections.

Whatever be the case, it must be expressly noted that the Boko Haram terror group could not have carried out the recent killings in Zarbamari but instead a politically sponsored killings which are as a result of the recently conducted local government elections in the state.

There are indeed puzzles behind the Zarbamari killings. We thank you all for your time.