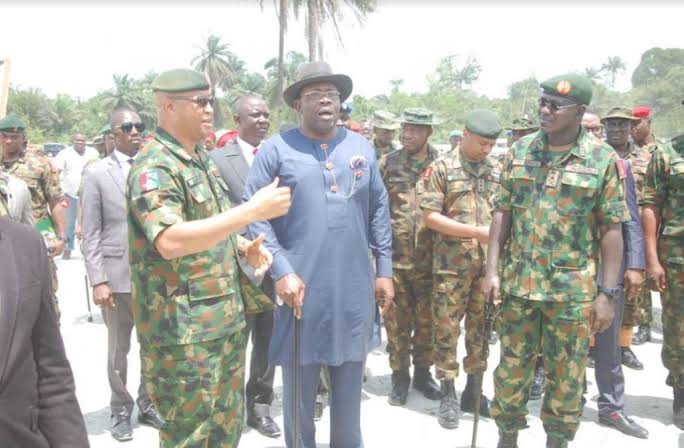 The National Democratic Front (NDF) has hailed the Nigerian Army for its professional conduct during last Saturday’s governorship election in Bayelsa State.

The gallant troops, alongside other security agencies, were on ground in the usually hostile oil-rich state, ensuring that armed militia don’t stop Nigerians from performing their constitutional obligation.

Unlike in time past where unprecedented violence and bloodletting was the day’s order, the exercise in Bayelsa was relatively peaceful and calm.

In a press conference on Monday, the NDF was full of praise for the Army for its “invaluable role in the peaceful conduct of polls in the country.”

The group, in a statement signed by Secretary General, Dr Abdulkadir Bolaji, believes it is a “ testament of the commitment of the Army in protecting the country’s nascent democracy and upholding the sanctity of the constitution”.

The pro-democracy group is particularly impressed with Chief of Army Staff, Lt. Gen. Tukur Buratai for “the institutional reforms introduced in the Nigerian Army that has seen to the renewed vigour and commitment of officers and soldiers in protecting the territorial integrity of Nigeria.”

The National Democratic Front commends the Nigerian Army and other security agencies for their invaluable role in the peaceful conduct of the gubernatorial elections, and it wishes to state that. However, for this intervention, the polls would have witnessed unprecedented violence and bloodletting.

This is indeed commendable because our country’s democracy was preserved, and the will of the people prevailed in electing leaders of their choices during the elections.

The National Democratic Front particularly commends the Nigerian Army for its invaluable role during and after the polls in Bayelsa state, which gave rise to the relative peace and tranquillity that pervaded the state that is known for high militant activities.

This is indeed a testament to the commitment of the Nigerian Army in protecting the country’s nascent democracy and upholding the sanctity of the Constitution of the Federal Republic of Nigeria.

The Nigerian Army, by every standard, lived up to the expectation of Nigerians and the international community by seeing to the peaceful conduct of the polls.

The National Democratic Front believes that despite the myriads of security challenges that were witnessed during the gubernatorial elections in Kogi state, the intervention of the Nigerian Army indeed saved the day in Kogi state; else, the level of destruction and loss of lives would have been disastrous.

This is also on the heels that there was some noticeable connivance by some security agencies in abetting the anomalies that were witnessed during the elections. However, it is on record that the Nigerian Army stood tall and was able to minimize the level of casualties during the elections in Kogi State.

The National Democratic Front wishes to specially commend the Chief of Army Staff, Lt. Gen. Tukur Buratai for the institutional reforms introduced in the Nigerian Army that has seen to the renewed vigour and commitment of officers and soldiers in protecting the territorial integrity of Nigeria, as well as preserving the constitution of the Federal Republic of Nigeria at all times. The Chief of Army Staff also deserves special praise for ensuring that soldiers are not used to disrupt elections anymore, but rather, on the ground to preserve the integrity of the electoral process as with the case in Bayelsa and Kogi states.

The National Democratic Front notes with enthusiasm that with the way and manner the Nigerian Army has been restructured by the present leadership led by Lt. Gen. Tukur Buratai, Nigerians should expect that gone are the days where officers and soldiers would be used by politicians to subvert the will of the people.

The National Democratic Front commends the Nigerian Army and other security agencies that worked round the clock to ensure that the electoral process in Bayelsa state was peaceful, and the voters were able to exercise their electoral franchise without fear, and also for its timely intervention in the Kogi state polls to save the day by minimising incidences of violence, bloodletting and other acts of electoral brigandage.

This is indeed commendable and an indication that our nascent democracy shall thrive with the commitment exhibited by our security agencies in recent times. The National Democratic Front also notes that all of these would not have been possible without the inputs of the Commander-in-Chief of the Armed Forces of the Federal Republic of Nigeria, who indeed promised Nigerians that the country’s nascent democracy shall thrive under his watch.

The fact that we are experiencing peaceful electoral transition in the country indicates that Nigeria is indeed on the path to greatness, and the efforts of the various security agencies cannot be overemphasized.

This much the National Democratic Front identifies and encourages the various security agencies not to relent in their efforts so far in the best interest of the generality of Nigerians and our nascent democracy.

The National Democratic Front wishes to use this medium to state that with the level of professionalism in the Nigerian Army and other security agencies, Nigerians do not have any reason to entertain any form of fear towards the preservation of our democracy.

The National Democratic Front also wishes to encourage Nigerians to continue to extend their support to the security agencies in the country in their quest towards protecting the territorial integrity of the country, as well as the preservation of our democracy.