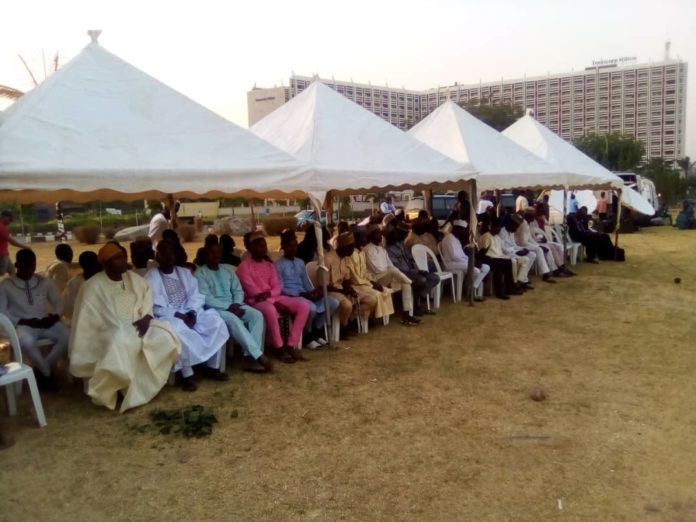 About 500 clerics have again gathered in Abuja to kick start  a 21 days prayer and fasting session in what they describe as against the forces planning the destabilization of Nigeria.

The clerics drawn from various churches across the country said with the present situation of things in the country, prayers and fasting is urgently needed to salvage the Nation.

Led by Bishop Sunday Garuba, the President of the National Interfaith and religious organization for peace, NIFROP, he said the prayer session that will end on the 15th of February will afford the clerics to intercede so that Nigeria can be healed.

Speaking from the second book of Chronicles 7:14 (New International Version) which declares that “if my people, who are called by my name, will humble themselves and pray and seek my face and turn from their wicked ways, then I will hear from heaven, and I will forgive their sin and will heal their land.”

Garuba said,  “We have come to that point when we can no longer persist in our division and way of life that rend us asunder contrary to God’s will.

“We can no longer continue to posture that all is well when it is clear that God wants us to repent of the sins we commit against ourselves and the glorious land that the Lord has provided for us in Nigeria.

The Cleric said NIFROP have made Agape its creed, doing onto others as the Lord ordained irrespective of sectarian variations.

He said this is done to the extent that compatriots call upon God in their own understanding in a manner that does not violate the tenets of true worship as revealed by the spirit.

He added that there is no basis to go to war with a fellow human over theological divergence.

Continuing he said, “it is for this very reason that prayers offered by NIFROP are answered when we continue to hear from God each time we gather to seek understanding through supplications.  We had prayed in the past and God exposed the sponsors of the herdsmen/farmers crisis.

“We had also prayed in the past and God humbled the Boko Haram terrorists since President Muhammadu Buhari came on board. God brought President Buhari on board after the prayers of this group to redeem Nigeria and the many blessings. These terrorists had thumped their nose at God in their ignorance but they were put to shame because they never knew that President Buhari was coming as God’s right hand against their evil intentions.

He said not to be forgotten are those that had kept Nigeria backwards by stealing our commonwealth.

“They pushed God’s people to the wall to the extent that we had to again resort to prayers until God exposed all these looters since President Buhari came on board as a servant of God.

“Our  perseverance and persistence in prayers has been of help in warding off the sustained evil and demonic attacks which has made the devil to continue to fail in all his machinations against our nation, Nigeria. Brethren I can tell you that all these are the reason why the devil is out to destabilize this nation. They do not want to see anything good in the country”he added

The Man of God implored brethren not to allow these evil ones regroup after God has given the nation victory over them. It is for this reason that Nigerians, irrespective of faith, must rise up in prayers for the unity of the country. The intention of these demons is to turn our land into their own killing field but our intercessions to God has not allowed them to prevail over us. Rather, we shall eternally triumph over them.

Garuba said their latest strategy of using terrorists to attack Christians is meant to provoke believers in Christ Jesus to forsake their faith and become vengeful in contravention of the Lord’s charge that we should not embark on vengeance. They want to make us lose the grace of the Lord that abounds in our life.

“Their expectations are that Christians will launch reprisals against Moslems and shed blood for their demons to drink. But the wisdom of the Lord that profited and the spirit of discerning have laid bare their plot to us such that no one fell into the snare they had set out for us.

Brethren, knowing the powers of prayers, we exhort you all to again resort to prayers in asking God to ward off these latest rounds of spiritual and terrorists’ attacks directed at tormenting God’s elected. We shall again triumph and have cause to sing songs of thanksgiving onto the Lord”he said

They were various prayer session, song rendition at the flag off ceremony.