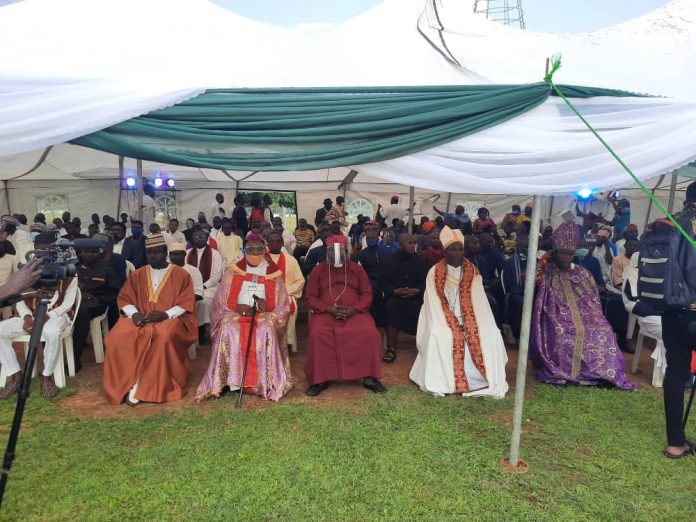 The National Inter-Faith Religious Organizations for Peace (NIFROP), on Saturday, said it is united in prayers behind President Muhammadu Buhari in his quest to rid the nation of criminal elements and corrupt individuals.

According to the Christian and Islamic clerics, the president is the target of “evil forces” unhappy with his progress in the anti-graft campaign and the war against insurgency.

The religious leaders made this known at the grand finale of the 21 days Inter-Faith Prayer and Intercessory programme at the Unity Fountain, Abuja.

In his address, Deputy National Coordinator, Sheik Abdullahi Muhammad, revealed that there is a gang up to discredit the current administration.

“Nigeria is a great country, and it is a known fact that the forces of darkness are not happy with the great efforts of President Muhamadu Buhari toward addressing the various challenges in the country,” his statement reads in part.

“These individuals and groups have been very ferocious in their evil desire against Nigeria. This is why the Unity Church and the Unity Masjid has been praying for the past 21 days for Allah’s protection on our leaders as well as the people.

“My brethren, we have all been faithful to the Nigerian cause. On previous occasions, we have organized ourselves in prayers for our dear president when his life was under constant threats and attacks. Our prayers were answered, and today our president is hale and hearty and discharging the functions of his office to the benefit of all Nigerians and the chagrin of those that were after his life.”

Assuring the president of total  support “spiritually” in the numerous battles facing the country, Sheikh Muhammad, however, charged

all Nigerians to imbibe the habit of praying for leaders and country.

He adddd that in no distant time these individuals and groups will be exposed.

“We are going to pray for Allah to expose them no matter how highly placed they are. They would be put to shame, and Nigeria shall be free at last for the forces of darkness that have ganged up against our peace and progress,” he added.

On his part, National Coordinator, Bishop Sunday Garuba, said Nigerians owe it a duty to show gratitude for the preservation of the president’s life despite the avalanche of conspiracies against him and his administration.

According to Bishop Garuba, Nigerians are “proud of the modest achievements of our security agencies so far, and that is why we have not relented in offering prayers continually such as this gathering for God to continue to deliver victory to our troops in battle”.

Amidst the plots by “agents of darkness”, Bishop Garuba called on Nigerians to rise and take the battle to the adversaries.

His words, “I want to tell us today that God has revealed to us all the plots against the life of our President. On numerous occasions, there had been grand plots to kill President Muhammadu Buhari by the forces of darkness that are not happy with the way he is leading Nigeria steadily on the path of greatness.

“They are also not pleased about the fact that it has not been business as usual as what was obtainable in previous administrations. They also tried in vain to eliminate the President because he is a man of truth. But we thank God for His intervention in preserving the life of President Muhammadu Buhari.”

The respected preacher, however, warned: ” those that have been sponsoring acts of violence in the country to be beware of the wrath of God upon them”.