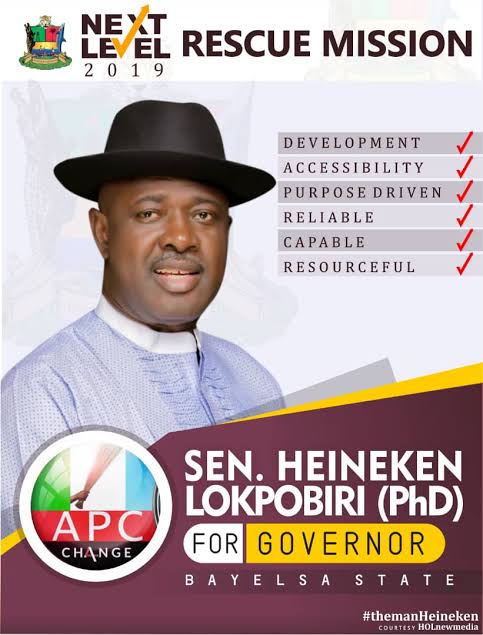 The Deputy National Publicity Secretary of the All Progressives Congress (APC), Mr. Yekini Nabena has said that a governorship aspirant in Bayelsa state Senator Heineken Lokpobiri, is being used as a pawn by two northern governors of the ruling party to further their 2023 political aspirations.

The APC deputy spokesman who refused to name the northern APC governors, threatened to name and shame them if they refuse to follow the path of honour ahead of the 2023 general elections.

Speaking with newsmen on Sunday in Abuja, the Bayelsa-born APC chieftain revealed that the said governors are using Sen. Heineken Lokpobiri, one of the APC governorship aspirants for Bayelsa state to cause disaffection in Bayelsa and the Niger Delta zone of the APC.

Lokpobiri, had approached the court to declare him, and not David Lyon (now Governor-elect), as the authentic candidate of the APC.

Nabena said, “It is common knowledge that Senator Heineken Lokpobiri has refused to congratulate and identify with the governor-elect of Bayelsa State, Chief David Lyon after his landslide election victory. Lokpobiri has refused to drop his misplaced and ill-advised legal action taken against the APC and David Lyon with the hope of acquiring the Bayelsa governoship mandate with the support of his sponsors.

“After the Bayesla governorship election, stakeholders have had several meetings where Lokpobiri’s sponsors were identified as two northern governors which I am not disposed to name for political reasons.

“Depending on the zoning arrangements adopted by the APC for the 2023 presidency, the governor’s are positioning themselves by scheming to control Bayelsa State through Lokpobiri and then use that as a springboard into other South South states.

“I will not dwell on the political power play among APC leaders of the South South for the soul of the region ahead of 2023. However, my strong advise for the governors is that they should focus on the development of their states and not meddle in the affairs of Bayelsa state and the South South.

“Bayelsa state and other oil-producing states of the South South enjoys a fragile peace as a result of the commendable efforts of the President Muhammadu Buhari government to develop the zone and productively engage the youth. We will not allow anybody to disrupt the peace of Bayelsa state in furtherance of their selfish political interests. President Buhari is a stickler for democratic principles and the rule of law, we all must follow these principles. Chief David Lyon emerged as the popular APC governorship candidate and went ahead to overwhelmingly win the Bayelsa Governorship election.

“It is Heineken Lokpobiri’s constitutional right to approach the court, even if his case has no merit. But I think it is important to let the world know that Heineken Lokpobiri’s actions are sponsored by outsiders in furtherance of their political interests ahead of 2023.”