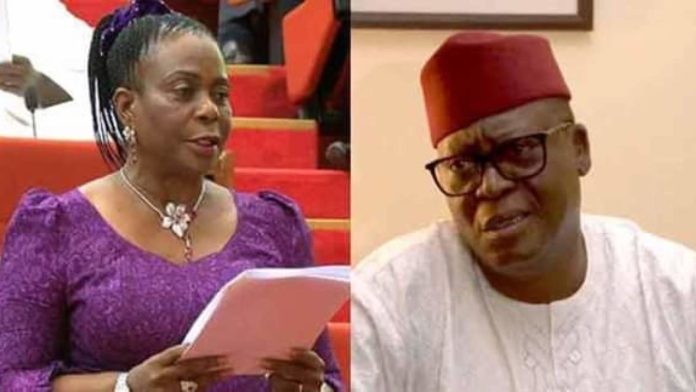 The Kaduna Division of the Court of Appeal has nullified the election of spokesman of the Senate, Senator Dayo Adeyeye. The Appellate Court subsequently upheld the tribunal judgment which declared Senator Biodun Olujimi and the candidate of the Peoples Democratic Party as winner of the Ekiti South Senatorial election held on February 23.

It would be recalled that the National Assembly Election Petition Tribunal sitting in Ado Ekiti,Ekiti State had nullified the election of Senator Dayo Adeyeye as the winner of Ekiti South Senatorial district.

Subsequently, the tribunal in a unanimous verdict declared former minority leader and the PDP candidate, Senator Biodun Olujimi as winner of the senatorial poll.

Following the declaration of Adeyeye, the candidate of the APC winner by the INEC in the February 23, 2019 senatorial election,  Olujimi had approached the tribunal, craving that she should be declared winner. She prayed the tribunal to annul votes in areas that were found to be marked with irregularities like over voting, multiple thump printing, ballot snatching, ballot stuffing and improper ballot counting should be cancelled to know the winner of the poll.

But the respondents countered the submission, saying what INEC did was right and constitutional, by declaring the candidate of the APC the winner. Delivering the judgement, the three -man tribunal,  led by Justice D.D. Adeck nullified the  elections in some polling units to declare Olujimi the winner of the polls. The tribunal said  Olujimi polled a total of 54,894 to emerge victorious over Adeyeye who polled 52,243. “We hereby declare the petitioner the winner and she is hereby returned elected. “We hereby direct the INEC to withdraw the certificate of return from the respondent and issue same to the petitioner”, he said .