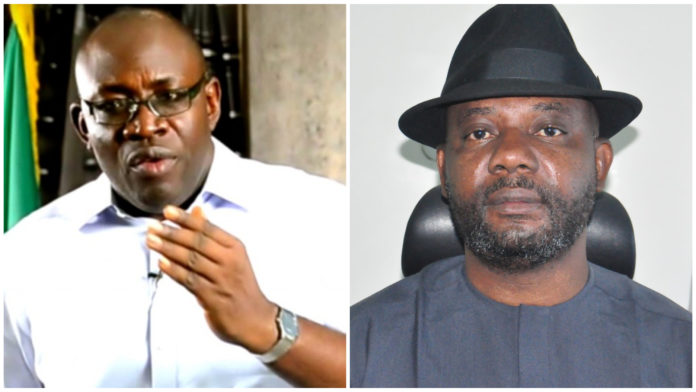 The Deputy National Publicity Secretary of the All Progressives Congress (APC), Mr. Yekini Nabena has dismissed claims by the governor of Bayelsa state, Seriake Dickson, claiming that security agents connived with the APC to hijack electoral materials in many local governments in the recent Bayelsa governorship election.

The APC deputy spokesman said Nigerians should disregard the claim, adding that “it was obvious that the people of Bayelsa state chosen to embrace the change and massively rejected governor Dickson’s stooge.”

Speaking at a brief interactive session with a select newsmen Thursday in Abuja, Nabena said he understood Dickson’s frustration after his rigging plans failed.

The Bayelsa APC chieftain, however advised the Governor to concentrate on the preparation of his handover notes.

Nabena said, “Governor Seriake Dickson has decided to take out his frustration on security agencies, particularly the Army and Police following the loss of his candidate in the recent Bayelsa governorship election. Why will Dickson blame security agencies for his loss? Bayelsans rejected Dickson, his candidate and the PDP. Governor Dickson can choose to hide under his media show after the election, but he knew defeat was imminent. That is why he tried unsuccessfully to use all manner of illegal tactics to rig the election including vote buying and violence to rig the election.

“While Governor Dickson must be commended for swiftly inaugurating the 41-member Bayelsa governorship transition committee, I advise him to concentrate on preparing his handover notes with the remaining time he has left in office.”

Chief David Lyon of the APC won the November 16 governorship election and is slated to assume office on February 14, 2020.

Nabena who described the APC victory in Bayelsa as “a revolution against bad governance,” also used the opportunity to thank the people of Bayelsa for their confidence in the APC.

The party deputy spokesman also thanked the APC campaign team led by Governor Abubakar Badaru of Jigawa state for their efforts in bringing about the change in Bayelsa state.

“Our people stood firm against their long standing oppressors to demand their freedom.

“We thank Bayelsans for their massive support for the APC governor-elect, Chief David Lyon and for their commitment to democracy. Nigerians know that you voted for APC, even PDP knows that you rejected them on February 16th, 2019, on account of bad governance and the international community knows you voted for APC,” Nabena said.

While assuring the people of Bayelsa of good governance, the APC deputy spokesman also called on the people to be vigilante in the remaining days of the outgoing governor Seriake Dickson in the government house.