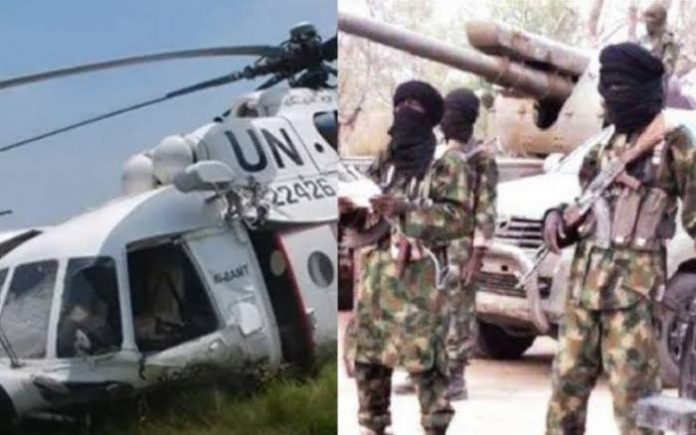 The Centre for Social Justice, Equity and Transparency (CESJET) has called on the United Nations to change its approach to the Boko Haram terrorism and announce sanctions against organizations and countries promoting and sponsoring the group.

CESJET gave this charge on Monday in a statement signed by Executive Secretary, Comrade Ikpa Isaac, following the recent shooting of a UN helicopter.

While condemning the attack as ” lowest act of cowardice yet on the part of Boko Haram terrorists”, the centre said that this a wake up call to the UN.

According to CESJET, the United Nations has smooched Boko Haram’s sponsors for too long and now is the time to quit playing the ostrich.

It added that the Intergovernmental organization must accept the truth about the sponsors and promoters of the terrorist groups that are killing civilians in Nigeria and other parts of West Africa.

CESJET, therefore, called on UN to “announce actions that send strong signals to the countries that are sponsoring and supporting Boko Haram, including the non-profits and non-governmental organizations as well as corporations and big businesses that answer to these countries”.

The Centre for Social Justice, Equity and Transparency (CESJET) has followed recent development in the north-east of Nigeria with concerns, particularly the shooting damage of a helicopter belonging to the United Nations (UN) by Boko Haram terrorists. The attack is the final indication that the UN must change its approach to the handling of the Boko Haram menace.

CESJET is worried that the attack, which also resulted in civilian deaths, has not met with the expected level of outrage even from the United Nations that suffered damage from it. All that has been heard from the world body so far is the tepid statement from a lowly UN humanitarian coordinator in Nigeria, Edward Kallon, giving updates and situation reports.

On our part, we condemn the attack as the lowest act of cowardice yet on the part of Boko Haram terrorists and we see such desperation to score a hit as indication that the terrorists will shoot at just about any target now that they are mortally cornered by the Nigerian Military that has taken the war to the heart of terrorists’ camps.

The attack on the helicopter is a wakeup call to the United Nations that it is time for a change in its stance of indifference to the crimes being committed by Boko Haram and by extension the corporations and the third party nations that are using the terrorists to pursue their geo-strategic agenda in the Lake Chad Basin. The UN had maintained an attitude of treating Boko Haram as Nigeria’s problem to which it was providing relief for civilian population caught up in the crisis instead of seeing and treating as the treat it is to humanity.

The presence of the airship in the vicinity could easily be mistaken for the UN being engaged in something meaningful in ridding north east Nigeria of Boko Haram and all its mutations but in reality, this is far from the truth. What the UN is doing in Nigeria’s northeast, flying aid missions, is akin to constantly mopping a flooded room without taking steps to fix the broken pipe from which the water is spilling. It does not make sense that the world body is flying aid missions without taking a firm position against the countries that are manipulating Boko Haram to destabilize Nigeria.

If the UN had taken the difficult decision of crafting a resolution to curb the countries that are behind Boko Haram and bringing its hammer down on the sponsors and promoters of terrorism in Nigeria and the west Africa sub- region, then it would not need to fly humanitarian sorties that expose its equipment and personnel to terrorist gunfire.

The United Nations has smooched the Boko Haram’s sponsors for too long while pussy footing on taking decisive actions against the group. If the UN had thought this approach will cast it as neutral and insulated from being a target, Saturday’s attack has now proven that the terrorists have no distinctions in the targets they select to attack as long as they can report back to their sponsors that they have again terrorized humanity.

The UN must now quit playing the ostrich and admit that it is time for the world to accept the truth about the sponsors and promoters of the terrorist groups that are killing civilians in Nigeria and other parts of West Africa. It is time for the UN to lead charge in cutting off these terrorists from among humans like the cancer that they are in the region.

CESJET charges the UN to in the coming days announce actions that send strong signals to the countries that are sponsoring and supporting Boko Haram, including the non-profits and non-governmental organizations as well as corporations and big businesses that answer to these countries and are supporting Boko Haram. Should the UN fail to do this and continues with its tradition of indifference then it stands to reason that Boko Haram will henceforth specifically target UN’s interests in the region because it would have proven itself as a toothless world body.