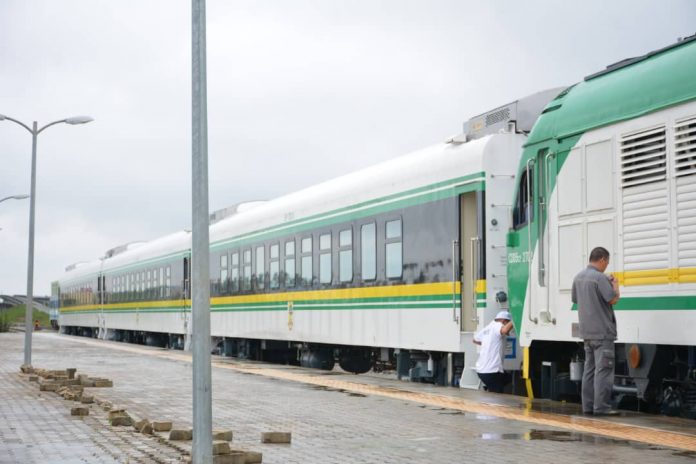 The Minister of Transportation, Rt. Hon. Chibuike Amaechi has disclosed that the Abuja-Kaduna rail services will begin Wednesday, July 29, 2020 amid precautionary measures to curtail COVD-19.
The Minister made this known Saturday during an inspection and test run of the 10 newly acquired coaches and 2 locomotives deployed on the Abuja – Kaduna rail corridor.
Furthermore, he informed that President Muhammadu Buhari has approved increase in train fares due to the fact that the train will now be conveying half its capacity in order to maintain social distancing.
According the Minister, , “In a month (pre-COVID-19), we get about N120 million, and if we run like this (half capacity), we will realize N60 million. It means that we need another N60 million to complete the running cost.”
It is, therefore for the above reason that the rates have been increased as follows: First class, N6,000, Business Class, N5,000 and Economy, N3,000 to enable Nigeria Railway Corporation (NRC) meet up at least with the running cost.
Asked if that will not be too much for the poor to pay, the Minister said that they can afford it and that that was certainly cheaper than the ransom to be paid if kidnapped on Abuja-Kaduna road.
On the Itapke-Warri rail line, the Minister observed that when it becomes fully operational, it would be more lucrative than Abuja-Kaduna route because “when the AKK (Ajaokuta-Kaduna-Kano gas pipeline) project starts, they will carry their pipes from Warri seaport to Itakpe.”
Speaking on why the Lagos-Ibadan railway is stalled, the Minister said it would have been commissioned in May but for the fear of exposing the about 1000 workers needed to complete it to COVID-19. For the Ibadan-Kano railway, the Minister said lack of funds is delaying its take off.
Interacting with Journalists, the Kaduna State Governor, Mallam Nasir el-Rufai who saw the Minister off to the rail station after a courtesy call, said the reopening of the railway could not have happened at a better time, attesting that COVID-19 is real, therefore people should abide by all the safety protocols.
On the issue of the increased train fare, the governor said he wished it would have been higher and called on the Ministry and NRC to consider e-ticketing as a measure of addressing ticket racketeering at the train stations.
On his part, the Managing Director, Nigerian Railway Corporation (NRC), Fidet Okhiria, said that with the arrival of these Diesel Multiple Units (DMU’s), the corporation will now increase the frequency of trips on the Abuja-Kaduna line from eight (to and fro) trips to 14 per day.
The Manager, Abuja – Kaduna Rail Service, Paschal Nnorli, stated that prior to reopening, there will be fumigation of all rolling stocks and offices, also a policy of no mask no entry will be enforced at all stations. He further disclosed that more DMU’s are still being expected on the route to manage the high passenger traffic.