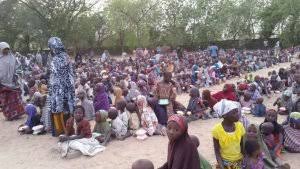 The Coalition Against Terrorism and Extremism (CATE) has fingered fraud, sinister motives by some international non-governmental organisations in northeastern Nigeria as the only factor restricting their operation.

CATE’s assertion trails claims by certain NGOs that tighter restrictions by authorities has crippled humanitarian crisis in the northeast.

Speaking at a press conference on Thursday in Abuja, National Coordinator, Gabriel Onoja, discredited reports by Human Rights Watch which it claimed is on a mission to destabilize Nigeria.

The activities of NGOs like Human Rights Watch, according to CATE, have worsened the plights of those affected by terrorism instead of providing succour.

CATE, consequently, warned HRW to stop playing the ostrich by admitting the truth rather than accuse the military falsely.

On its own part, the coalition, however, charged the Nigerian military to shake off HRW’s attempt at cheap blackmail and ensure the terrorists are starved of the support provided by rogue international humanitarian groups.

The Coalition Against Terrorism and Extremism (CATE) is disappointed to learn of the lies told by a section of international Non-Governmental Organizations (NGOs) to the effect that tighter restrictions by authorities is “stifling” efforts to tackle humanitarian crisis in the northeast of Nigeria.

CATE as an active stakeholder in the war against terrorism and extremism in Nigeria has deemed it necessary to set the record straight in view of the misleading report ostensibly put out by the Human Rights Watch staffers. It is best that the NGO retraces it steps, clean up its acts and revert to the humanitarian work that the world expects of it and not continue to be an agent of destabilization in the region.

We particularly note the ignoble statement credited to Human Rights Watch, a group that has been repeatedly discredited having been found to be in collusion with NGOs that have stated their avowed mission to destabilize Nigeria. A Human Rights Watch that had on several occasions allowed itself to be used as a front for publishing fake reports by Amnesty International has lost the moral right to speak on the management of access to the northeast, where the military is in the process of ridding the region of Boko Haram terrorists.

We find it necessary to clarify that NGOs that are genuinely engaged in humanitarian work, like CATE, have no difficulties transporting staff and materials to areas of their work. What Human Rights Watch is referring to as restrictions are the accreditations and controls put in place after the group’s associates were caught collaborating with terrorists up to the point of sharing intelligence with Boko Haram and Islamic State West Africa Province (ISWAP) commanders.

The activities of NGOs like Human Rights Watch have rather worsened the plights of those affected by terrorism instead of providing succor to them because any organization that offer any sort of support to terrorists makes it possible for them to destroy entire settlements and plunge the people into suffering.

It is consequently imperative that Human Rights Watch stops playing the ostrich by admitting the truth. Fraud and sinister motives, like acting as proxies for terrorists, are the factors hindering the operations of the NGOs and not military restrictions.

We urge other international NGOs that are threading the kind of destructive path of Human Rights Watch to have a rethink, especially now that the military has ensured that it is no longer business as usual for groups that exploit their international status as cover to aid terrorists to the detriment of the Nigerian state.

CATE charges the Nigerian Military to shake off Human Rights Watch’s attempt at cheap blackmail by continue to implement measures that ensure that Boko Haram and ISWAP terrorists are starved of the support provided by rogue international humanitarian NGOs. This support from international NGOs has been pivotal to the persistence of terrorists in the region and it is a situation that must stop now.