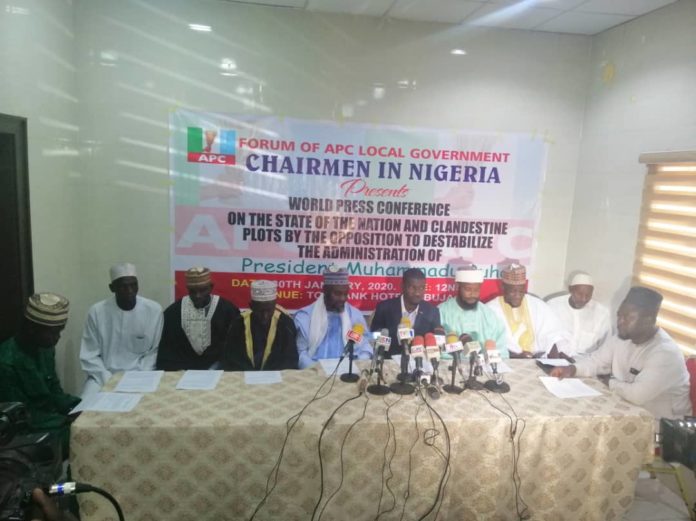 The All Progressives Congress Local Government Chairmen (APC-LGC) has has alleged that there is a plot by the opposition Peoples Democratic Party (PDP) to overthrow President Muhammadu Buhari with the aid of the National Assembly.

The grassroots APC chairmen made this accusation at a press conference on Thursday in Abuja, where it strongly accused the PDP of manipulating the NASS to remove the current administration from office.

Speaking on behalf of the group, National Coordinator, Adadu Alegwu revealed that the opposition has resorted to the legislative arm having failed to legitimately oust President Buhari in the Judiciary.

The recent upsurge in criminal activities across the country; from Boko Haram/ISWAP attacks to banditry and kidnappings, the group alleged, are the handiwork of the PDP, whose desperation for power isn’t strange.

However, its new-found alliance with the National Assembly, according to the APC leaders, is a cause for worry, especially after some of its disloyal members reportedly received humongous sum to betray the party.

This script, the group further revealed, is orchestrated by a top-ranking member of the PDP in the National Assembly, backed by a former president, a governor of one of the South-South state and a perpetual presidential candidate.

According to the group, having already penetrated the NASS, the PDP sought to win over the Service Chiefs to its fold.

However, their unwillingness to compromise triggered the opposition to unleash mayhem in the country.

The Forum of APC LGA Chairmen, therefore, says it considers the grand plot as a coup against democracy, and as such discerning members of the general public are placed on notice of the manifestation of the destabilization plot by the PDP.

The group further enjoined Nigerians to be steadfast and resolute in their belief in the sustenance of democracy.

The National Forum of APC Local Government Chairmen the umbrella forum of all APC local government chairmen in Nigeria is holding the press conference as a matter of national interest to intimate members of the general public of the clandestine plot by the opposition Peoples Democratic Party (PDP) to remove President Muhammadu Buhari from office through the National Assembly.

According to credible information reaching the National Forum of APC Local Government Chairmen has indeed revealed that the opposition PDP is the brain behind the recent upsurge of criminal activities across the country manifest in Boko Haram/ISWAP, banditry and kidnappings.

This they, the PDP, have elected to do in an attempt to pitch the people against the democratically elected government of President Muhammadu Buhari all in a bid to take the mandate freely given by the people through the backdoor and destabilize the country.

The general public should be informed that the PDP has mobilized humongous amount of monies for this despicable act that has seen monies exchanging hands for the actualization of their evil agenda against the administration of President Muhammadu Buhari.

The National Forum of APC Local Government Chairmen wishes to inform the general public that credible information at our disposal indicates that a former president, a governor of one of the South-South states, a perpetual presidential candidate, who still has his gaze at the 2023 presidential elections, and a governor from one of the states in northwest Nigeria, are all behind this despicable plot.

This grand plot against democracy in Nigeria has as a component a puerile campaign against the Service Chiefs because of their loyalty to the country and the President and Commander-in-Chief of the Armed Forces, and also their refusal to surrender the country to them during the 2019 general elections.

We also have it on competent authority that the character and efforts of the Service Chiefs would be subjected to an inglorious slander campaign to compromise their loyalty to the Constitution of the Federal Republic of Nigeria.

The Forum of APC Local Government Chairmen have also gathered from credible sources that should the Service Chiefs refuse to buckle to their evil plots; there would be a covert sponsorship of criminal activities across the country in a bid to undermine their efforts in the fight against terrorism and other political militant groups.

Also, as part of the grand plot, the PDP has enlisted the support of a major religious group to use their platform to issue statements and carry out actions that would discredit the administration of President Muhammadu Buhari and by extension to paint a picture of religious persecution, which would, in turn, set the country on a dangerous religious crisis.

The game plan is to ensure that the Supreme Court is also brought to disrepute since it failed to remove President Muhammadu Buhari from office. We consequently wish to state that the recent nationwide protest by the PDP over the Supreme Court judgment is a pointer to what to expect from the PDP and their hatchet men in the next few days.

The Forum of APC Local Government Chairmen considers the grand plot as a coup against democracy, and as such discerning members of the general public are placed on notice of the manifestation of the destabilization plot by the PDP that would be unleashed on the country in the days ahead.

The Forum of APC Local Government Chairmen wishes to put in on record that should Nigeria experience any form of religious and political upheaval in the days ahead; the PDP should be blamed squarely.

We also wish to state that Nigeria is a democratic country that is governed by laws, and any attempt by unscrupulous political elements that have refused to respect the wishes of the people would be resisted through the instrument of the law.

The Forum of APC Local Government Chairmen consequently enjoins members of the general public to be steadfast and resolute in their belief in the sustenance of democracy in Nigeria. It is our firm belief that this nefarious plot by the PDP would fail woefully because Nigerians are wiser and can see the handwriting written on the wall.

For them, it is either their way for no way. But for the generality of Nigerians, it is indeed our way because the destinies of over 180 million Nigerians cannot be truncated because of the blind and selfish ambition of a few.

We wish to state that Nigerians are indeed watching as events unfold. And it is our firm belief that their nefarious plot would fail woefully.

Thank you all for taking out time from your busy schedules to attend this press conference, and together we shall make Nigeria a viable and robust country where our hopes and aspirations would be translated to tangible realities.

May God bless Nigeria and bless us all.