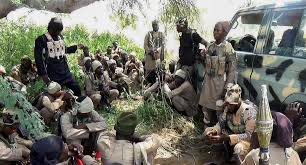 The operations of the Nigerian Military in the ongoing battle with Boko Haram/ISWAP terrorist group in North-East Nigeria have received commendations recently from a wide array of security experts that stated that indeed there had been tremendous gains made so far.

This medium undertook an investigative report and sorts the views of a cross-section of security experts drawn from Nigeria and other countries. Their opinions were in uniformity with the fact that the ISWAP terrorist groups have been decimated and left in disarray and the Nigerian Military has made enormous gains.

According to a highly placed security sources who pleaded anonymity, he stated that from available Intel, what is now left of ISWAP are a bunch of disgruntled fighters facing hunger and logistics challenges so much so that some of its members now enter communities to steal food and other essentials to keep their lives running.

“What is left of ISWAP now is not a fighting force but that of a group of young men struggling for survival from the harsh realities of lack of food essentially. They have been highly factionalized, and the bulk of the attacks you notice in recent times are carried out in their mission to look for food in some of these villages.” He further stated that the Nigerian Military is closing in on them and ensuring that all is done to put their nefarious activities to an end.

This position was buttressed by Professor Gilbert Kansas of the International Institute for Counter-Terrorism Herzliya, Israel. He stated that the Nigerian authorities had demonstrated a rare feat in counter-terrorism operations with the way and manner it has been able to handle the threats posed by the Boko Haram/ISWAP terrorist group.

“In Nigeria, the Nigerian Military did a pretty good job of breaking the ranks of the ISWAP group within a record time. This is cognizant of their affiliations with other terrorist networks around the world. From available information at our disposal, the ISWAP group has not been able to get that critical support it requires from the network to sustain their activities.”

“This is a rare feat that agrees with the Game theory in Counter-Terrorism operations that underlines the interface between factions within a terrorist organization, and the interplay between diverse agents, as well as capturing the strategic interplay between terrorists and targeted governments. The Nigerian Military has indeed done well.”

Dr. Howard Grant of the Department of War Studies, Kings College London, shared the same sentiment with Professor Gilbert Kansas of the International Institute for Counter-Terrorism. He averred that the strategic objectivity of the ISWAP was to establish domains in Nigeria and four West African countries at the end of 2019.

“If we understand the dynamics of international terrorism, we must indeed admit that the feat recorded in Nigeria is outstanding with the manner the Nigerian Military has been able to break the ranks of ISWAP and within a record time. Some other countries facing such challenges have not been this lucky. I believe that the Nigerian experience should serve as a reference point in effective counter-terrorism operations.”

Mr. Afolabi Jelili, a security research analyst with the National Institute for Policy and Strategic Studies, stated that the gains made by the Nigerian Military in the fight against terrorism in North-East Nigeria since 2015 have been outstanding.

“A cursory look at the available indices indicates that there have been substantial gains in the fight against Boko Haram/ISWAP terrorist group. Their ranks have been broken, and they have resulted in aiming at soft targets in women and children, going on rampages in villages and causing destructions to paint a picture of a strong fighting force, but in truth, they are in disarray.”

He added that a 2018 research analysis predicted a tough year for the Boko Haram/ISWAP group, and this much was the case with the way and manner the Nigerian troops responded to the threats posed by the groups.

“There was a projection by the ISWAP affiliate of ISIS to gain control of Nigeria and some other countries in Africa, and Nigeria was designated as the start point. If it had succeeded in Nigeria, it would signal the beginning of an inglorious reign of terror. This is not the case today due to the efforts of the Nigerian Military in confronting the terrorists and ensuring that their nefarious activities are nipped in the bud.”

In a similar vein, Terhemba Kwaga, an associate professor of cognitive psychology of the department of Psychology, Benue State University, Makurdi heaped praises on the Nigerian Military for the way and manner it has been able to sustain the morale of its troops. He argued that the importance of cognitive stability and flexibility in warfare, such as the Boko Haram/ISWAP war cannot be overemphasized.

“The troops have displayed the right mental balance in the prosecution of the war, and this has led to the tangible gains recorded so far. This is on the heels that guns and tanks are not the only weapons of war, the right cognitive balance is one, and this much the Nigerian Military has utilized to their advantage and largely responsible for the gains made so far. This is remarkable as well as commendable.”

In a similar development, it has been recorded that there is currently crisis in the camp of the Islamic State of West Africa Province (ISWAP). This development is coming at a time when ISWAP lost about 25 of its commanders in a series of raids carried out by the Nigerian Military in the last two months. Credible sources stated that many others have fled into the neighboring countries of Chad, Niger, and Cameroon as a result of heavy bombardment from security forces.