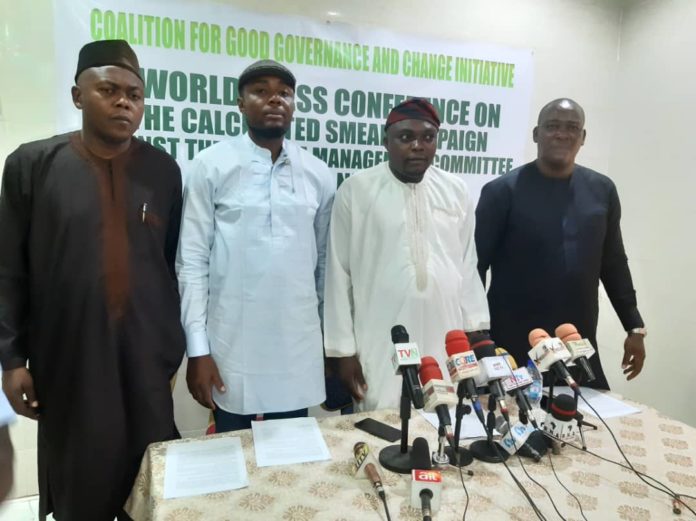 This utter desperation, the group revealed, prompted some disgruntled elements in the guise of civil society groups to blackmail Dr. Nunieh, accusing her of parading fake NYSC certificate.

The coalition made this known at a press conference on Monday tagged “NDDC: Nunieh and her defiant fight for the soul of Nigeria”, to address the “ infantile attempts by nebulously dubious characters to drag the MD’s personage and reputation”.

In his statement, Convener, Comrade Ogenyi Okpokwu described the accusation as “sickening mendacity and hearsay even in its most sophisticated scrutiny”.

According to Mr Okpokwu, Dr. Nunieh is a respected woman of virtue and such conclusion is based on no empirical or verifiable evidence.

The coalition was particularly irked by the fact that the “traducers and antagonists could not grab a copy of Nunieh’s alleged fake NYSC discharge certificate to convince the doubting public”.

The Acting MD’s persecution isn’t surprising, Mr Okpokwo added, especially after President Muhammadu Buhari handed the acting MD the uphill task of sanitizing the agency by ordering a forensic audit of the NDDC.

So far so good, the coalition believes Dr. Nunieh has so far altered the status quo by diligently and boldly flushing the rot in the system, which hasn’t quite gone too well with many.

It is on this ground, however, that CCSGGC warned these disgruntled persons or groups to steer clear the acting MD’s case or get ready to be disgraced by Nigerians.

We want to profoundly welcome and thank all of you for the prompt response to our invitation for a press conference. May God Almighty continue to bless the fruits of your labour for a better and prosperous Nigeria.

The Coalition of Civil Societies for Good Governance and Change Initiative (CCSGGI) is baffled at the eagerness some Nigerians housed under Nigeria’s reigning modern camps for idlers parading as CSOs/activists. They easily render themselves as personality attack dogs and weapons of blackmail for equally dubious characters for peanuts.

They flaunt the emblem of disgusting, unscrupulous and unconscionable characters. Outside their overt partisan proclivities is the tendency of unbated exhibition of unrestrained hatred against the anti-corruption campaigns of President Muhammadu Buhari and any of his appointee who toes this path.

It struck us with extreme consternation news from apparently odious emergency activists and worthless hirelings, which fertilely attempted to blackmail/degrade the Acting Managing Director, Niger Delta Development Commission (MD-NDDC), Dr. Mrs. Joi Nunieh over an infantile accusation of lack of an NYSC discharge or exemption certificate. But the allegation insistently bowed to sickening mendacity and hearsay even in its most sophisticated scrutiny.

Its illogical, incoherent, patently inchoate, and offending to understand an assemblage of matured men could anchor such a fluid allegation on a respected woman of virtue and leader. They based their conclusions on no empirical or verifiable evidence.

Rather, the accusers of Dr. Nunieh relied on a disjointed and hazy narrative of faint circumstantial shadows about its possibility. It belittles the senses of supposedly sound minds and the self-worth of these pawns contracted for the hatchet job in irremediable ludicrousness.

In a public statement, the CSO, with an irritatingly queer nomenclature, goofed. It claimed when Dr. Nunieh as nominee for the NDDC Interim Management Committee appeared at the FIB Headquarters in Abuja for vetting of her credentials, she pleaded to be permitted to rush home to bring her documents; together with the NYSC discharge certificate inclusive for vetting, but never turned up.

CCSGGI wonders whether members of the CSO were also part of the FIB vetting panel. In any case, they recoiled from presenting a concrete evidence to the public to support their claims.

Quite annoyingly, the CSO strangely moderated its earlier tone of vexation, and rather patronizingly flinched by effeminately pleading with her to present her discharge or exemption certificate of the NYSC, to the general public, if she is not parading a ‘fake and forged’ certificate.”

Whatever was the intendment of the hirelings, this strategy fell flat on every nuance of wisdom and sensibleness. In the syndicated public statement, one of the media houses was persuaded to add or insinuate that; “investigation has revealed that she has been parading a fake/forged NYSC discharge certificate over the years and is now afraid of providing the document now for scrutiny.” This is certainly exaggerated foolery in public nudity.

What motivations on earth, propel some Nigerians to conscript into the clan of demeaning blackmailers and cheap slayers? Dr. Nunieh has worked and held several public offices, including serving at the Hydrocarbon Pollution Remediation Project, (HYPREP).

But her traducers and antagonists could not grab a copy of her “fake” NYSC discharge certificate to convince the doubting public. He who alleges, proves his allegations. Let the accusers prove the claim.

The CSO was more interested in pointing accusing fingers to some imaginary “powerful collaborators within the presidency,” aligning “to sweep this NYSC forged certificate saga of Joy Nunieh under the carpet. “

Therefore, having staged a bad outing, the group consoled itself by boasting of nationwide protests to press for her sack, if Mr. President fails to direct the Inspector General of Police, Director -General, Department of State Services, the ICPC to commence investigation and prosecution of Dr. Nunieh for alleged forgery.

The CSO didn’t even know that someone must be reasonably and evidentially suspected of committing an offence before he/she is prosecuted. But they lumped the two together, an indication of acting a prepared script, with predetermined results. But the famished urchins failed to realize that neither the Presidency nor the other top government officials it invited into their dilemma do not accord dignity to vague allegations.

But let truth be told. We are all aware that the NDDC, an agency created by the FGN to fast-track the development of the Niger Delta region has become a cesspool of corruption for decades. And President Buhari’s action to sanitize the agency by ordering a forensic audit of the NDDC, the main mandate of the Dr. Nunieh-led NDDC Interim Management Committee attracted eulogies to the President.

It commendable that the NDDC boss has her eyes fixated on sanitizing and repositioning the NDDC for optimal performance beneficial to the region. So, any attempt to distract her focus will not be condoned or tolerated.

As a bona fide son of the Niger region who knows exactly what transpired in the commission before now and fully aware of Dr. Nunieh’s courageous efforts, I felt it imperative to mobilize my colleagues to stand up in defence of an apostle of a great Nigeria.

Dr. Nunieh’ has already empaneled the Dr. Cairo Ojougboh-led 50-member Verification Committee to audit and document projects /contracts awarded in the nine Niger Delta states to ascertain the authenticity of the quantum of suspicious Interim Payment Certificates (IPCs) claims by contractors which have piled a debt burden of N3 trillion on the commission. It’s a potent nightmare to these fraudulent contractors.

And Verification Committee is designed to clean the Augean stable for the proper forensic audit of the commission as ordered by President Muhammadu Buhari in 2019. The committee has a two-week duration to submit its report.

But news filtering from the commission is unpleasant with startling revelations of mega frauds in the commission. We still remember the popular case of a serving Senator. He was single-handedly awarded about 300 contracts by the NDDC; out of which 120 of the contracts have been fully paid, but none executed. The hired CSOs failed to stage a protest on the matter.

It is incontestable that the so -called or non-existing CSO peddling the hogwash against Dr, Nunieh is the typical expression of “madness.” It is instigated by those who mindlessly looted the resources of the Niger Delta region.

It is unfortunate that these very enemies of the people are out to ruin the integrity and reputation of a woman whose only sin is accepting Mr. President’s charge to rid the NDDC of corruption and mal-administration. We have no doubt that the NDDC boss has maintained a firm level of integrity anywhere she is assigned to perform a national duty.

And their failure to corruptly influence her to bow to dubious deals or soft pedal has raised a clan of enemies angling for her removal from office. It explains why months after she was screened and assumed office, no one raised the fake NYSC discharge certificate until she inaugurated a Verification Committee.

These infantile antics are familiar and cannot constitute a stumbling block to her determination to restore sanity in the commission. They have barked at the wrong person. Dr. Nunieh is woman has no skeletons in the cupboard and the enemies should think of another plot to frustrate her administration.

Let us put it in clear terms to the leeches that the NDDC boss is carrying out a very tasking job and, inevitably, she must trample on lions and lionesses that once defaced humanity at the NDDC. These are the veiled angry contractors and their collaborators who are out against a woman ever ready to catch the fraudulent contractors in their tracks.

Those chasing her shadows to stab should ask their conscience what the NDDC boss has done apart from preferring to serve her country in the patriotic posturing, which President Buhari has continued to govern the country in the last few years? The allegations against her are not just unfounded, but totally baseless and should be discountenanced by all Nigerians as the handiwork of Nigeria’s desperate “Esaus.”

The CCSGGI recognizes the laudable and manifest initiatives, reforms/ innovations Dr. Nunieh has impinged on the administration of NDDC now. Those scared have genuine reasons to be afraid. We encourage you to remain courageous and undaunted in the discharge of your duties bearing in mind that patriotic service to your nation elevates and etches your name on marbles colored with gold.

Finally, may we warn the detractors to change their style of business or be ready to be disgraced by Nigerians, as any attempt to tarnish the image of the interim management committee Chairman at NDDC will be rejected. It will be stiffly resisted by the Nigerian people on whose behalf Dr. Nunieh is working hard day and night to make life more meaningful for Niger Deltans in particular and all Nigerians in general.

Thank you for your patience and audience