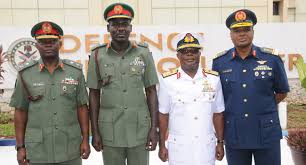 The Pro-Nigeria Elders Council (PRONECO) has described the Young Parliamentarians Forum (YPF) as an extension of selfish political merchants chasing their personal interests.

PRONECO’s position trails the group’s call for the removal of the nation’s Service Chiefs over alleged widespread insecurity.

Inaugurated by Senate President Ahmad Lawan in October, the YPF objective was to secure the inclusion and participation of youths in the process of deepening Nigeria’s democracy.

However, the Pro-Nigeria Elders Council believe the group has been hijacked by the opposition to carry out its dirty work.

Speaking at a press conference on Tuesday in Abuja, Publicity Secretary, Hon. Bala Kuta, PRONECO disclosed that the YPF is merely acting a script with its call for overhaul of the security architecture.

According to the elders, this desperation is to pave way for loyalists and sympathizers to ascend and illegally overthrow the government.

PRONECO, therefore, urged law enforcement agencies to be on red alert as these disgruntled politicians could move a step further to connive with junior officers in the military to attempt the coup they had always wanted.

The elders, however, commended Mr. President for keeping faith in the Security Chiefs “in view of the war situation that our country has found herself in with both internal and external aggressors”.

Gentlemen of the press, you must have noted the upsurge in the number of persons and organizations calling on President Muhammadu Buhari to sack the military service chiefs. This has been a long-time development with a recent twist. The recent twist to this call, which we consider criminal, is that the call has become systematic, which has prompted us to see a pattern and aggregation.

In essence, the demands from some quarters and individuals for the service chiefs to be fired from their posts is being teleguided by those that have vested interests that require that the nation’s security architecture be dismantled. Their objectives cannot be achieved as so long as the current crop of service chiefs are in office hence the desperation to force them out of office even when it is not in the interest on the country.

We have not lost sight of the fact that one Senator Eyinaya Abaribe recently demanded the resignation of President Buhari on account of these same service chiefs. It was not surprising that this same Senator is the one that has been propping up the Indigenous People of Biafra (IPOB), a terrorist group that has been outlawed by the courts of the land.

It is no surprise that the position canvassed by Senator Abaribe has now been taken up by other federal lawmakers from other zones, particularly the north-east, which confirms the suspicion that such lawmakers have been at the root of the Boko Haram insurgency and can no longer take the heat directed at their foot soldiers under the leadership of the able service chiefs. Their demand for these fine officers and commanders to be sacked therefore becomes understandable even though unacceptable.

Even when sporting the branding of the All Progressives Congress (APC), which is a mere disguise, the fact that the bulk of these lawmakers, like the Young Parliamentarians Forum (YPF) are members of the opposition. The same opposition that threatened the country with the threat of more killings should President Buhari be re-elected. His victory at the polls became the basis on which they unleashed their killers on the rest of us. Also recall that the opposition has been desperate to have a change of guards in the entire military services so that their loyalists and sympathizers can ascend and illegally overthrow the government to pave way for a transition government that will hand over power to the opposition.

Unfortunately, these coup plotters have something hidden behind their sleeves which to all discerning minds must be viewed with a microscopic lens as people that do not mean well for the Nigerian state.

These are ploys that are well known and for which the service chiefs have made robust responses to ensure that the country remains safe hence the angst against them by the same people that want to turn the country upside down. We understand their anger in this regard although we have no sympathies for people that want to destroy our country for us.

It is most uncharitable that even when their plots have been repeatedly thwarted by the Armed Forces, these unpatriotic people have decided to carry on with the demand for the sack of Nigeria’s service chiefs but have nonetheless resorted to unleashing distractions on the nation at large and the military in particular. Only persons that are interested in derailing the focus of the military would engage in such irresponsible approach of wearing down the energy of persons tasked with providing security to citizens.

Considering the extent of damage they have done to our body polity through support to terrorists in the past, we are urging law enforcement agencies to note that It is high time these persons are watched closely as their failure to bastardize the military might push them into conniving with junior officers in the military to attempt the coup they had always wanted. This of course will jeopardize our democracy and is something that must not be allowed to happen.

We also want a professional and clinical probe of the security breaches across the country. Clearly, if the growing spate of insecurity was the concern these persons, they would have by now made a fair assessment of the situation and come up with nationalistic solutions. But because the reason informed them to demand that Mr. President and the Service Chiefs should leave office are selfish in nature, they have not been able to make useful input to advance the great work being done. They are too obsessed to know that Mr President and his team are working day and night to restore peace and normalcy to the land.

PRONECO therefore wishes to commend the wise decision of Mr. President to keep the Security Chiefs in view of the war situation that our country has found herself in with both internal and external aggressors.