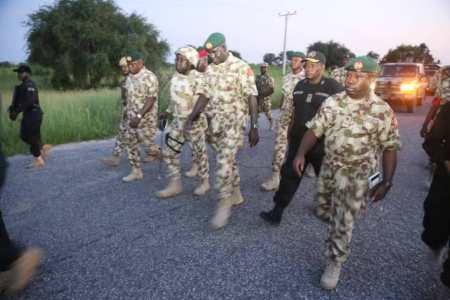 An international counter-terrorism expert, David Otto, has advised the Government of Burkina Faso to learn from the successes recorded by the Nigerian Army under the leadership of Chief of Army Staff, Lieutenant General Tukur Yusuf Buratai if they hope to end the menace of jihadists/terrorists in the country.

Under the leadership of Lieutenant General Buratai, the Nigerian Army has recorded tremendous progress in the fight against terrorism despite conspiracy from disgruntled politicians and foreign non-governmental organisations.

Mr Otto believes Burkina Faso have a lot to learn from Nigeria’s Army chief if they are to win the war against jihadists groups in the country.

He gave the advise when granting an interview on Aljazeera.

“Burkina Faso has become weakest link due to jihadists influence. They moved towards Burkina Faso as unprepared, due to ungoverned spaces.

He said Burkina Faso was not prepared, because it is an assymetrical warfare they are fighting, which requires special skills.

He urged Burkina Faso to learn from Nigeria, which made a lot of gain against jihadists since 2015.

“From 2015 with Lieutenant Ganeral Yusuf Buratai, they made a lot of progress. They need to learn from other African countries like Nigeria that are fighting jihadists.

“Burkina Faso seems to have been run down by the jihadists and there seems to be no answers, the French are really not helping,” he submitted.

He said the Islamic State of West African Province (ISWAP) is one of the most dangerous groups operating in the region.

He further said other militia groups linked to the Fulani Herdsmen/Farmers crisis are also threatening the region.

Otto charged Burkina Faso to act fast to drive jihadists out of the region.

He described the situation as bad, but called on Burkina Faso leaders to look for a counter Insurgency strategy, which they don’t have at the moment.