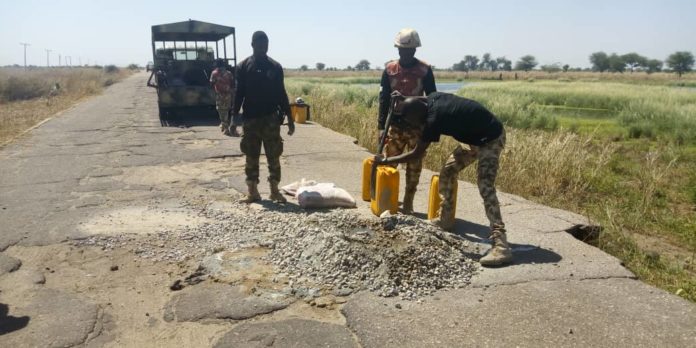 The Nigerian Army has maintained its onslaught against Boko Haram/ISWAP fighters.

The gallant troops of Operation Lafiya Dole have left no stone unturned in its bid to totally wipe out the fleeing insurgents.

As seen in some photos that went viral on social media a couple of months ago, the troops were pictured constructing a bridge leading to secret hideout of the radical Islamic sect.

Yet again, the gallant troops have displayed selflessness and rare patriotism.

This time around, though, the troops proved that they are not only engaged in the counter insurgency operations but are also working hard to mend the abandoned roads into the areas.

It will be recalled that no fewer than 50 Boko Haram fighters were killed by the Nigerian Army around the said road in April.