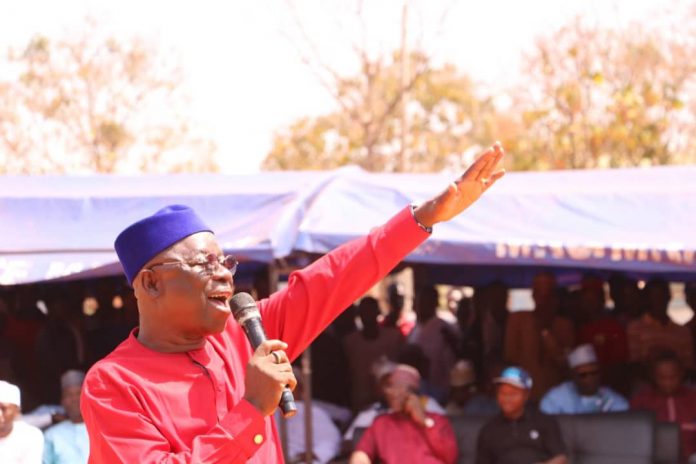 “… as he pays thank You visit to constituents for call on him to re-contest for 3rd term, organizes reception for his immediate electoral ward, reveals plans to flag off campaign Soon… “

The Speaker, Nasarawa State House of Assembly, Alhaji Ibrahim Balarabe Abdullahi, has today organised a warm reception for the people of his immediate electoral ward Umaisha in Umaisha/ Ugya State Constituency to appreciate them for the call on him to re-contest for the third term which he has officially accepted.

The Speaker who made the call while speaking in an event in his honour today in Umaisha, called on his constituents and the State at large to support the Presidential candidate of APC, Bola Ahmed Tinubu, Gov. Abdullahi Sule and himself as well as APC party to succeed in 2023 general election.

He said that the APC government at both the State and Federal levels have performed well in touching on the lives of the people, hence the need of his call in that direction.

” I am here to say thank you for always supporting me to succeed and to officially answer your call to recontest for third term to represent you in the state legislature beyond 2023,

” peace is the foundation of every development and even the enemy of our Governor Abdullahi Sule will give him credit in the area of security not to talk of other achievements,

” Our presidential Flagg bearer Bola Tinubu is the best man for the job and these are the people we are going to vote come 2023.

” You are aware of what I have done and still doing in touching on your lives positively and I believe this is why you asked me to re-contest and I have accepted your calls and together we shall swim Insha Allah” He said.

Balarabe Abdullahi urged the people of Umaisha and other people of the constituency to pray and support him, Gov.Sule and Bola Tinubu, the Presidential candidate of APC to succeed in 2023 in order to enjoy more dividends of democracy.

The State Number Three Citizen appreciated Gov. Sule for his security efforts that has brought peace in Toto LG and other parts of the State as well as his developmental strides in almost all sectors of the economy.

He assured the Governor of his readiness to mobilise support to all nooks and crannies of Toto LG and other parts of the State to enable him and other APC candidates succeed beyond 2023.

Besides, the Speaker has disclosed that he would soon flag off his campaign in the area.

” Very soon , I will sit with my campaign team to decide when we will flag off my campaign where I will invite all the people of my six electoral wards, from my LG, my political associates and other personalities to witness the flag off” he added.

On their parts, Hon Yusuf Musa Omaki, a former Lawmaker and Commissioner who is the State Coordinator Tinubu/ Shatima Campaign Organization and son of the soil, Mr Isaiah Agah, the APC Zonal Chairman, Nasarawa West, Hon Abdullahi Aliyu Tasha,Chairman Toto LG all underscored the positive representation and leadership qualities of the Speaker and drummed support for him, Gov. Sule and Tinubu to succeed in 2023.

The trio said that the people of the State and Nigerians would benefit more, if the vote APC at all levels in the country.

They assured of their readiness to mobilise support for the Speaker, Gov. Sule and Tinubu to succeed in 2023.

It was reported that the well attended brief reception for Umaisha Electoral Ward demonstrated that the Speaker Nasarawa State House of Assembly Alh Ibrahim Balarabe Abdullahi is with his people and the people are with him and a clear road for his victory and that of his party in coming elections.