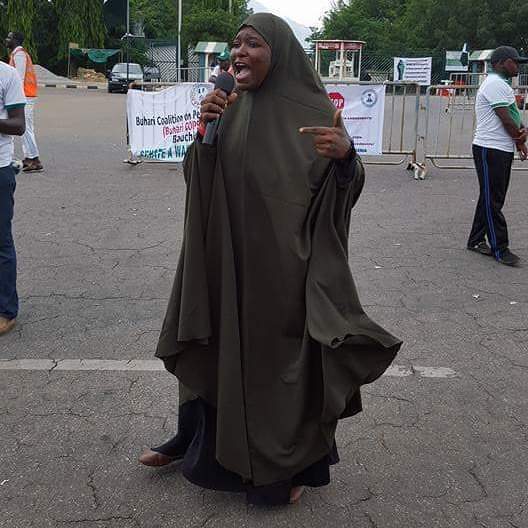 The Citizens Against Fake Activists (CAFA) has lashed out at co-convener, BringBackOurGirls, Aisha Yesufu, appraising her that abusing President Muhammadu Buhari won’t lift her out of poverty.

In a foul-mouthed attack, Yesufu described President Buhari as a “coward” simply “cowering in Aso rock” wasting every single kobo spent on him by Nigerians.

Yesufu’s statement attracted the ire of Nigerians, with many rebuking her for lacking manners and disrespecting the country’s most-revered office.

The Citizens Against Fake Activists, on Monday, joined fellow compatriots to reprimand the self-acclaimed activist, who according to them is unteachable, empty and bereft of knowledge; quick to jump into issues to satisfy her paymasters.

CAFA took out time to school Yesufu on issues surrounding insurgency in the country and the West-African sub region, particularly as it concerns Nigeria, Chad, Cameroon and Niger.

In a statement by Director Communications and Publicity, Comrade Ibrahim Kabir Dalla, CAFA reckoned that the Nigerian troops would have achieved more than it already did if not for Yesufu’s associates, comprised mostly of terrorists.

The Citizens Against Fake Activists, however, advised Yesufu to tender an apology to the Office of the President.

The group further called on Nigerians to report offending posts and any other irresponsible attacks coming from her to Twitter, just like they did some time ago.

The Citizens Against Fake Activists (CAFA) has noted with disgust the new low to which the co-convener of the BringBackOurGirls group, Aisha Yesufu has sunken to when she decided to describe the office and person of President Muhammadu Buhari as a waste. Even for the pay-for-hire activist that Aisha Yesufu has been confirmed to be, her decision to desecrate the highest office in the land is the height of irresponsibility regardless of how much she has been paid to distract the government of the day.

Her justification for this unpatriotic criminal act was supposedly because Chadian troops were able to give Boko Haram terrorists a fight, which made her to ignorantly conclude that Nigeria has not done enough to deal with the insurgents when the opposite is the case. She irresponsibly wrote “The coward we have as Commander-in-chief who is supposed to be a Rtd Major General is cowering in Aso rock villa. His theatre of war is reading in front of the camera. Buhari @MBuhari is a waste of every single kobo spent on him by Nigeria,” which is most unfortunate and unacceptable.

In reality, the saddest part of the entire incident is that Aisha Yesufu is unteachable, incapable of keeping quiet and composed long enough for the facts being presented to her to sink in before she goes all hyper in her desperation to satisfy those that are deceiving her that they can pay her way out of poverty. Had Yesufu been capable of these qualities, CAFA would have undertaken to provide knowledgeable experts to educate her to the cardinal errors that underpin her commentaries on national issues.

Even at that CAFA will like Aisha Yesufu to orientate herself to the concept of international relations, international law and jurisprudence, which would easily point her to understand that while Boko Haram operates in an area that transverses Nigeria, Chad, Cameroon and Niger it is still not possible for one country to intrude into the territory of the other, which the terrorists have been exploiting to launch cross border attacks before fleeing into a different jurisdiction.

In terms of military realities, an intelligent person, even without military background, would have realized that it took the constant containment and degrading from the operations conducted by the Nigerian Army to have corralled the Boko Haram terrorists into the underground holes from where the Chadian Army smoked them out. She must also be made aware that her comments are supporting Boko Haram recruitment drive by creating the impression that there is a preponderance of public sympathy and acceptance of the crime that the terrorists are committing.

It is important to mention that the Nigerian military would have made further gains against the terrorists but for the sabotage of Yesufu’s associates, comprised mostly of terrorists’ sympathizers and organizations that trade in human misery, who do everything possible to prevent the military from wiping out those scums of the earth.

CAFA hereby calls on Aisha Yesufu to immediately apologize to Nigerians for treating the Office of the President of the Federal Republic of Nigeria with disrespect and disdain. Yesufu’s personal angst against President Buhari is something that only her understands so we are not going to ask her to apologize to Mr. President, what we demand from her is an apology to the office being proprietary to Nigeria and one that must not be disrespected by anyone. We must however offer her the free counsel that she risks damaging her health if she does not take measures to manage her pointless anger against President Buhari.

We urge Nigerians of good conscience to report the offending tweet and any other irresponsible attacks coming from her to Twitter as hate speech. Twitter does not accept that kind of behaviour from users in some other countries and we can collectively make the company respect the same level of decorum here.