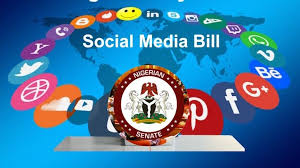 Frank specifically urged the authorities of the United States of America (USA), United Kingdom (UK) and European Union (EU) to withdraw and place perpetual visa ban on the Senators and members of their families.

He described the Senators as “rubber stamp” who have failed to realize the purpose for which they were elected by Nigerians.

In a statement on Wednesday in Abuja, Comrade Frank, threatened to lead a campaign to the US, UK and EU to make sure the Visa ban on the pro-social media bill Senators is effected “until it is withdrawn.”

According to the Bayelsa-born activist, Nigeria is a democratic country and not a ‘Banana Republic.’

He insisted that the satanic ambition of a few misguided Senators can never drown the voices of over 200 million Nigerians.

Frank said: “The Social Media Bill is a satanic plot by the General Muhammadu Buhari’s government in collaboration with his rubber stamp Senate to gag Nigerians and stop them from expressing their views.

“The Social Media Bill is a contradiction in terms as the 7th Senate passed the Freedom of Information Bill which the 9th Senate is about to repeal through the back door.

“Instead of passing Bills that will help grow our democracy, fight corruption and insecurity, the 9th Senate is more interested in rubber stamping all requests of the executive.

“I urge the International Community to place members of the 9th Senate sponsoring or supporting the Social Media Bill on Visa ban, including their families.

“Let me place on record that 95 per cent of Nigerians are against the anti social media Bill.

“The 9th Senate has failed to concentrate on delivering the dividends of democracy to Nigerians, who elected them to speak for and not against us.

“I call on the electorate to vote out every member of this 9th Senate who supports this anti-people Bill in 2023, should they pass the Bill against the will of the people.

“We expect this 9th Senate to put pressure on the executive to sign the Electoral Act in order to strengthen our democracy and not to kill it.

“When other countries are strengthening their democracy, the 9th Senate is aiding and abetting the executive to truncate democracy.”

Frank reminded the “recalcitrant Senators” that they will not remain in the upper chamber forever “as they will soon been back into the society to taste the bitter effects of their draconian laws.”

He added that such Bills “will also affect the very sponsors of the Bill and Nigerians will forever remember this 9th Senate as the lawmakers that took away their freedom of expression via the anti-social media Bill.”