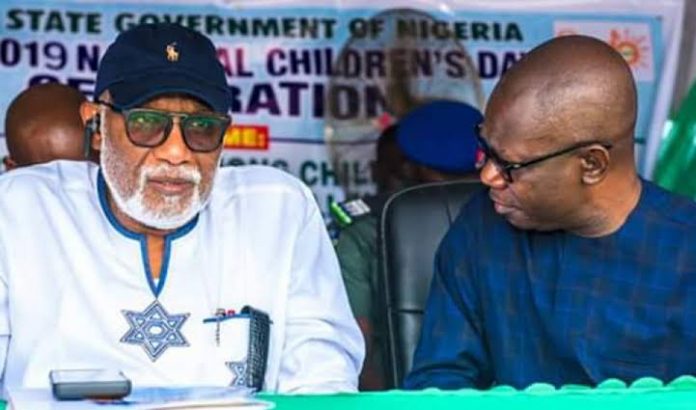 A frontline governorship aspirant of the All Progressives Congress (APC) in Ondo state, Chief Olayide Owolabi Adelami, has reacted to the recent exit from the party of the current deputy governor, Agboola Ajayi, saying governor Rotimi Akeredolu should be blamed.

The former Deputy Clerk of the National Assembly, told newsmen in Abuja, during an interactive session on Thursday, that Governor Akeredolu failed to provide needed and necessary leadership when the crisis arose within the APC before the deputy governor left the party.

The deputy governor recently dumped the APC for the Peoples Democratic Party (PDP).

When asked to comment on the deputy governor exit from APC to PDP, Chief Adelami described the Ondo state deputy governor’s sudden exit from the party as “one of the key weaknesses of the incumbent governor Oluwarotimi Akeredolu at managing people.”

The governorship aspirant said: “the governor (Akeredolu) is not people oriented. This explains why majority of aggrieved members of APC in Ondo state are looking for a replacement.”

Adelami added that “ordinarily governor Akeredolu should have towed the part of reconciliation rather than a face – off with his deputy, Agboola Ajayi.”

On the question of how the deputy governor exit will affect the fortune of APC in the forthcoming governorship election in Ondo state, the Owo – born politician rhetorically dismissed any adverse effect on the fortume of the party adding that Governor Akeredolu will directly missed a stabilization figure in his administration.

Adelami said: “On the coming days it will not be a surprise, if other key personalities in his administration will not follow the same path of exit. That is when the whole World will see the true picture of Akeredolu.”

On his choice of primary election mode, the former National Assembly deputy clerk said “the popular opinion is a direct primary. I normally refer to it as election before election, nobody will be disenchanted, everybody will be given opportunity to express themselves.”

“Like I said, the first thing is to come to Ondo state to maintain party cohesion. Number two, the numerous disenchanted, near hopeless youths roaming the streets. We have so many of them in Ondo state who have been carrying their certificates for the past five, six years looking for job that is not there. I’m coming to Ondo state to engage our teeming youths. They must work, they are the asset of Ondo state and I value them so much. They are going to take priority in the projects I’m going to execute in Ondo state.”