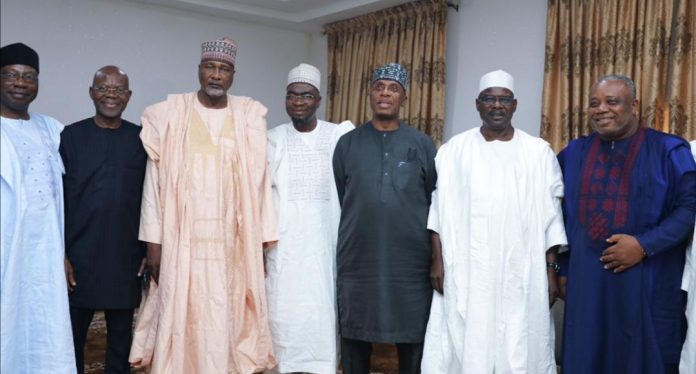 Former Minister of Transportation, Chibuike Rotimi Amaechi today paid condolence visit to the home of distinguished Senator Ali Ndume over the recent passing of his father.

Amaechi who was a Presidential aspirant in the last All Progressives Congress (APC) primary election, was accompanied to the Maiduguri home of Senator Ndume by members of his campaign Organisation.

The former Minister further said, “though we had a bit of time with his father, who already grown very old then, but he was quite kind to all of us.

Our chairman inherited this seemingly good virtue of his late father. He is almost a replica of his father.

“In Nigeria today, especially at the political terrain, we have a lot of people who are lacking this quality- good character but not in our chairman.

In all honesty, I think that was what he inherited from his father. So that’s what prompted our coming to say to him that he’s not just a man but a leader that people must emulate, aside his family he should mentor others and pass on this leadership quality to others especially to those that would miss his father.”

Late Alhaji Ali Buba was born in October 1940 in the Ville Village of Gwoza Local Government Area, Borno State. He enrolled into the Nigerian Army during the Civil war. Upon retirement from the Nigerian Army, he was appointed the 1st District Head of Ville District in 2016 by HRH the Emir of Gwoza on the approval of the then Governor of Borno State Kashim Shettima.

He is survived by two wives , eight children with many grand children.