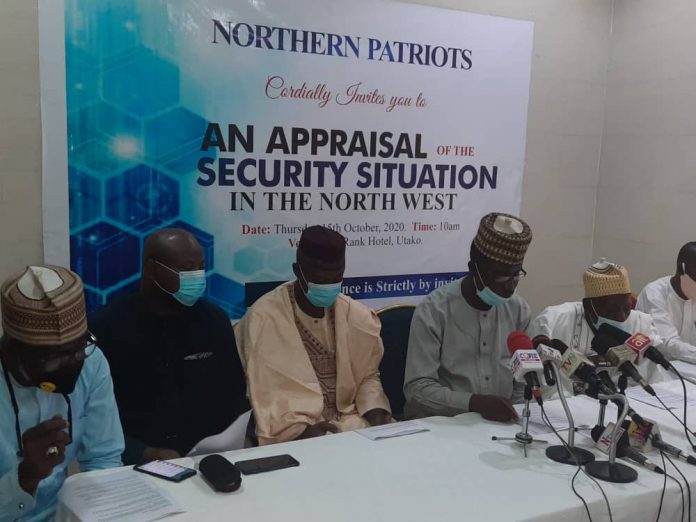 Following a three-month appraisal exercise, the Northern Patriots (NP) have passed a vote of confidence on the Nigerian Army, rating its Operation Sahel Sanity as a success.

The Northern Patriots gave this commendation at a media interactive session on Thursday in Abuja.

Presenting the report on behalf of the group, National President, Alhaji Nuruddeen Dodo said sanity has been restored to the Sahel since the introduction of the exercise.

Launched in July, the operation was aimed to tackle banditry, kidnapping, cattle rustling and other crimes in the North-West and parts of North-Central.

Barely two months after, Chief of Army Staff, Lt. Gen. Tukur Buratai extended the exercise to sustain the progress achieved within the period and enable troops to wipe out remnants of criminals from the zone.

In its report covering July 6 to October 10, 2020, the Northern Patriots said within a month of launching the operation, the people of the North-West witnessed a sigh of relief.

The report revealed that thousands of people that ran away from their communities after the bandit attacks immediately returned home.

It added that troops eliminated a good number of armed bandits, recovering a large cache of arms and ammunition.

The Northern Patriots, therefore, commended the COAS for extending the Operation Sahel Sanity to December as that will give it ample time to deal with the criminals in that region.

It, however, urged authorities to extend the exercise to other zones to sustain the successes achieved within the period.

You will recall that as military operations focused on Boko Haram and ISWAP terrorist activities in the Northeastern part of the country, there were pockets of disturbances in some parts of the country especially the Northwest and  Northcentral parts of Nigeria.

Military operations in the Northeast became intense because the terrorists were killing people at random, abducting persons,  blowing up buildings to the extent that they were threatening the territorial integrity of the country.

As the military clamped down on the terrorists killing many of them and sending the remaining fleeing out of Nigeria, certain criminal elements thought they could take advantage of the situation to ply their heinous trade in other parts of the country.

They assumed that since the Chief of Army Staff, Lt.Gen Tukur Yusuf Buratai had relocated to the Northeast and was dealing ruthlessly with the terrorists by leading troops from the front, other zones would be safe to terrorise and be visited with mayhem as they may be off the radar for the military.

Within a short period, therefore, what started as hit and run attacks on distant and separate communities in the Northwest began to assume another dimension.

Criminal elements in no time invaded the spaces in the Northwest states of Katsina, Sokoto, Zamfara and Kaduna, moving up to the Northcentral state of Niger and began to terrorize communities in no less proportion than what Boko Haram was doing in the Northeast.

Scores were being killed and abducted daily, entire villages were sacked, people were being abducted and abused, houses were touched and valuables forcefully were taken away.

These acts of criminalities stagnated economic growth as it crippled the agricultural, social and economic activities of the people of the region.

Anarchy was fast descending in that part of the country despite other security arrangements in place.

When the bandits in a similar fashion, attacked several communities in Katsina and Sokoto States almost on the same day and killed hundreds of people which led to an explosion in the number of victims of terror attacks and several displaced persons in the country, the military realised that if it did not adopt a method that was beyond reactionary, Nigeria may soon have another problem of equal proportion with Boko Haram in the Northwest.

On the 6th of July 2020, the Chief of Army Staff, Lieutenant General Tukur Yusuf Buratai, flagged off Operation SAHEL SANITY in Katsina as part of activities of the Nigerian Army Day Celebration 2020.

The operation is meant to support Operation HADARIN DAJI in stemming the tides of the activities of armed bandits, cattle rustlers, kidnappers, incessant killings and other crimes in the North-West zone of the country.

The Army Chief also flagged off military operation in Faskar, and explained that military operation, was meant to comprehensively tackle banditry and other crimes in the Northwest and parts of Northcentral to restore peace in the affected states and Nigeria.

He said the Nigerian Army will be conducting the operation with the support of other sister security agencies, including the police, the Department of State Services and the authorities of the affected states and to show the seriousness of the operation, launched the newly acquired 10 Mines Resistant Ambush Protected vehicles (M-RAP) as part of the military hardware for Operation SAHEL SANITY.

Within a month of launching the operation, the people of the North-West Zone began to heave sighs of relief.

Thousands of people that ran away from their communities after bandit attacks, began to return.

Markets and hospitals closed at the height of the attacks began to reopen.

And people began to travel on roads leading to such communities thereby reconnecting them with the rest of the country.

This is consequent on the success of the military operation launched by the Army Chief which overwhelmed the bandits.

Before the end of July, The gallant troops of Operation SAHEL SANITY carried out series of clearance operations, ambushes and other aggressive and confidence-building patrols within Sokoto, Katsina and Zamfara States which led to the rescue of kidnapped victims, recovery of rustled cattle, the arrest of suspected armed bandits, the arrest of bandits informants and collaborators.

The troops also recovered a large cache of arms and ammunition as well as motorcycles and other bandits logistics.

The troops did not stop at that but penetrated several bandits camps including the notorious Dangote Triangle and destroyed their logistics bases.

Troops also mounted sentry in areas hitherto occupied by bandits making it impossible for them to regroup or launch fresh attacks.

We, therefore, commend the Nigerian Army and other security agencies for their resilience, doggedness and braver which has led to the success of the operation.

We also commend the Chief of Army Staff, Lt.Gen Buratai for the tactic he brought into the exercise by introducing the Super Camp Strategy which has produced results.

We commend the Nigerian Army for extending Operation Sahel Sanity to December as that will give it ample time to deal with the criminals in that region.

Given the enormity of the problem in the Northwest, we believe the authorities must extend the coverage of the exercise to other zones especially the Northcentral to sustain the successes achieved within the period.

This will also enable troops to avert a situation where the criminals can overlap to cause havoc in other territories and ensure peace in all parts of the country.

We call also call on host communities of Zamfara and Katsina to continue to support and cooperate with the military especially in the area of information sharing and intelligence gathering.

Communities in the NNorthwestmust be ready to report criminal element in their midst while political leaders must step up their games to provide support for troops.

We believe that if these measures are taken, the entire Northwest, Northcentral and Nigeria would be free from criminal activities as well as benefit more from the military operation.